So Long, and Thanks for All the Games

Last week I sent out a tweet marking a rather sad turn of events concerning one of the most notable game studios of all time. On further reflection, I wanted to say a few words here.

On Wednesday, Sony shut down their European development house SCE Studio Liverpool. But, those reading this blog will likely better know the studio by its previous name, Psygnosis. 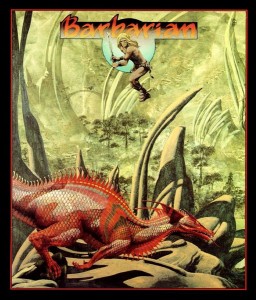 Founded in 1984 out of the ashes of Imagine Software, Psygnosis earned high praise for their large catalog of 16-bit game titles, released during the ’80s and early ’90s, that consistently demonstrated unusually high quality graphics and animation, especially on the Amiga platform. In 1993, to strengthen their coming Playstation console, Sony purchased Psygnosis and channeled the studio’s talents towards their new platform. Most notable among the console’s early releases was the futuristic racing game Wipeout, which sold many Playstations for Sony, one of them to me.

Psygnosis’ best known titles are probably the multi-platform hit Lemmings, Shadow of the Beast for the Amiga, and the Wipeout series. The first Psygnosis game I ever played was Barbarian on the Atari ST. It’s onscreen graphics were stunning, if the gameplay was somewhat disconnected, and the box art and pack-in wall poster by fantasy artist Roger Dean, whose work was featured in (and on) many Psygnosis releases, were striking. After I moved (back) to the Amiga, I often showed off the system’s capabilities to friends, demonstrating various Psygnosis games and their animated intro sequences. None were as impressive as Shadow of the Beast, however. The game’s controls may have been awkward and it didn’t offer the best gameplay, but the artwork, high number of onscreen colors, and amazing parallax scrolling were absolutely stunning.

The day the news broke about the closing of the studio, I tweeted a short list of some of my particular Psygnosis favorites (well, those that would fit in 140 characters, anyway). I’ll repeat those here, in no particular order.

It saddens me to see the Psygnosis story end, though, save for Wipeout (I bought a PSVita to play Wipeout 2048), my core connection to the studio is to do with games from decades past, which I still enjoy. But, then, 28 years is a pretty good run by anyone’s measure.

This entry was posted in Amiga, Atari, Gaming, Multi-Platform. Bookmark the permalink.

5 Responses to So Long, and Thanks for All the Games