A Look Back at Three Decades of Word Processors

A few days ago I was running through twitter when I saw Peter Cohen (@flargh) link to a blog post he had written about distraction free writing and the focused simplicity of a 30 year old word processor. Reading the article, I began to reflect upon the word processors I have used over the past 35 years and it inspired me to write a little about a few of those that stand-out in my mind. (I should underscore the fact that this post is not meant to be a look at the overall evolution of the word processor, but a look back at my own experiences over the years.) 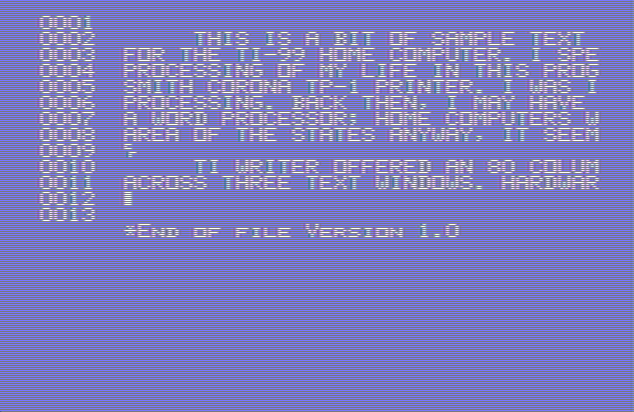 TI Writer on the TI-99/4A (1983) — My first computer, the TI-99/4A, was nice for games and educational programs, but wasn’t the ideal word processing platform. Wanting to start using a word processor for my school reports (6th grade), I made the obvious choice to go with TI Writer, a combination cartridge and disk program that output to a printer tied to the RS-232 interface card (if you had one). The TI could only generate a 40-column display, but TI Writer delivered a virtual 80-column page that could be viewed using a left, middle, and right panning window — a bit cumbersome, indeed. I had a Smith-Corona TP-1 daisywheel printer hanging off of that board’s parallel port and became one of the very first kids in my class to hand work in done on a home computer. (Screenshot shows the first 1/3 of the 80-column sample document I created for this post.) 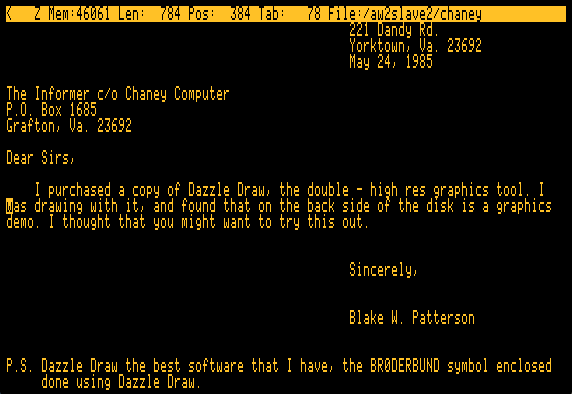 Apple Writer II on the Apple //c (1984) — My next computer was the Apple //c which I got right after it launched in early 1984. And it had 80 column text! The go-to word processor at that time was Apple Writer II, which was simple but functional — a dream compared to TI Writer! I had an Apple ImageWriter printer for output. (Screenshot shows a document I recently found on my 32-year-old Apple Writer II data disk.) 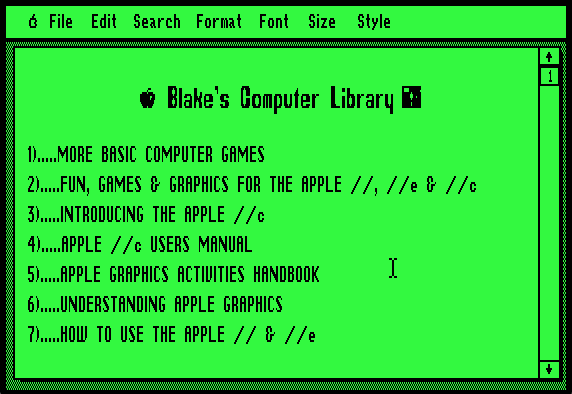 MultiScribe on the Apple //c (1985) — After getting a mouse for the //c, I was able run StyleWare’s new MultiScribe WYSIWYG word processor. I was lusting for a Macintosh at the time and this felt like something of a bridge to that world of bitmap graphics and fancy fonts. Its output to a dot-matrix printer was pretty rough looking, however. As such, I didn’t get much serious work done with this one. (Screenshot shows another document I recently found on my 32-year-old Apple Writer II data disk.) 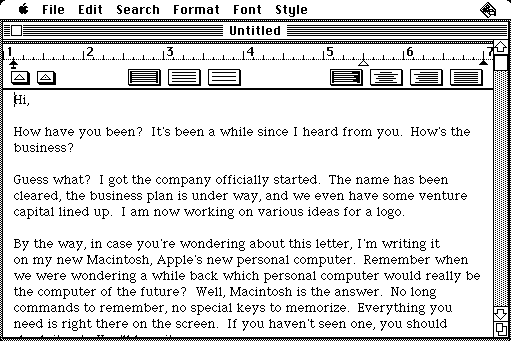 MacWrite on a Macintosh 128K (1985) — Now this is where I was trying to be, using MultiScribe on the //c. I finally got a Macintosh, and it came with MacWrite and MacPaint. I never did any real word processing on the Mac, however, because a week after getting it I saw an Amiga 1000 on display at the local computer shop, returned the Mac, and put an order in for the Amiga. I never even had a printer hooked to that Mac! In the early ’90s I bought a Macintosh LC and used a much later version of MacWrite on that machine during part of college. I even made some money doing page layout for students with that LC, MacWrite, and my StyleWriter printer. 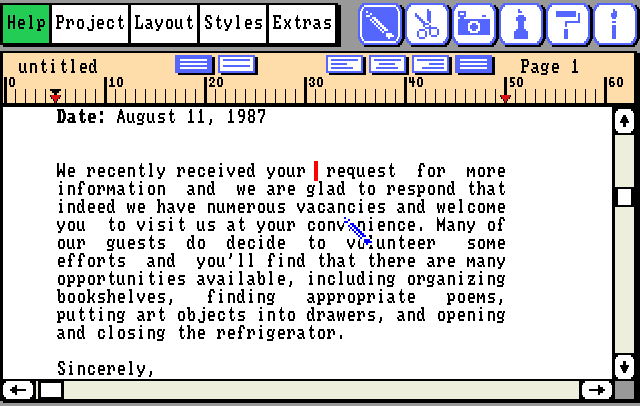 Textcraft on the Amiga 1000 (1986) — To say that software was slow to come for the Amiga after its late 1985 launch is an understatement. I had two different printers hanging off of my A1000 (an Epson LX-80 and a color Okimate 20) and for many months my only “word processor” was the extremely basic Notepad bundled with AmigaDOS. Finally I got Textcraft, made by Arktronix (who created the notable but unsuccessful windowed word processor suite, Jane). It was a proper word processor, rather basic, but it helped me get the schoolwork done. (Screenshot courtesy of Paul Ford.)

AppleWorks on the enhanced Apple IIe (1986) — What an odd move! I sold my Amiga and went back to the Apple II! It was Apple Garamond that made me do it. At any rate, Apple’s integrated word processor, database, and spreadsheet suite was the thing to use at this point. We used AppleWorks in school and it was a surprisingly rich little package with a number of expansion tools made available by third parties. I used Pinpoint, I recall. I had an Apple ImageWriter II printer as part of this setup. 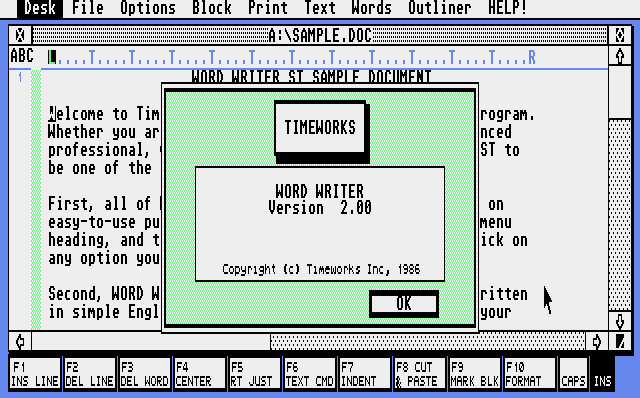 Word Writer ST on the Atari 520ST (1987) — The most popular word processor for the Atari ST was Atari’s own 1st Word, but it felt quite basic to me, so I went with Timeworks’ Word Writer ST, which is the first word processor I ever used that came with an integrated spell checker. Like 1st Word, Word Writer ST utilized the windowed GEM user interface of the Atari ST, though it was not a multi-font, WYSIWYG editor. I used an Epson LX-800 and an Okimate 20 printer with this setup. 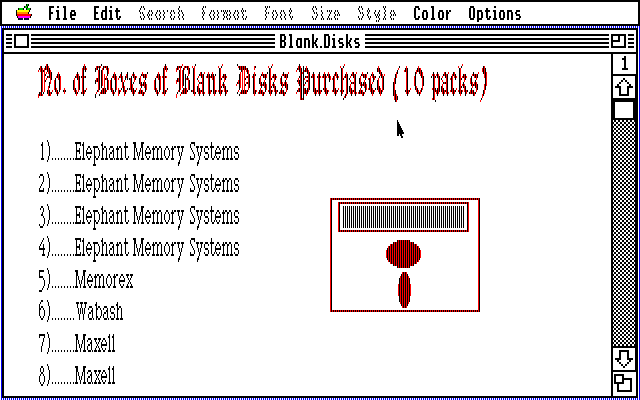 MultiScribe GS on the Apple IIgs (1988) — I did most of my word processing on the Apple IIgs using the aforementioned, 8-bit AppleWorks, as it’s what we had in the Apple lab at school. I was friends with the guys at the local dealer where I purchased the GS system and a salesman gave me copies of dealer versions of various IIgs applications, MultiScribe GS among them. I used it for a good many things. It’s print output, with color on the ImageWriter II, was quite nice. This felt like a Mac app. (Screenshot shows yet another document I recently found on my 32-year-old Apple Writer II data disk) 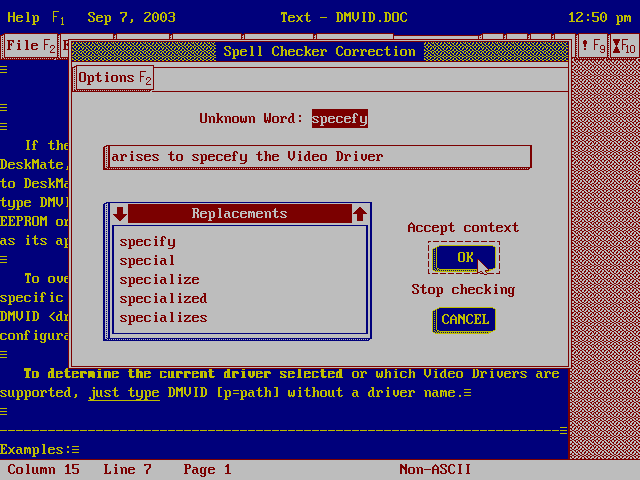 DeskMate on the Tandy 1000TL (1989) — DeskMate was Tandy’s own bundled app suite that came with every Tandy PC-compatible. It featured a spreadsheet, database, calendar, and word processor, with later versions seeing the inclusion of audio and drawing modules. It worked fine, but all parts were rather basic and I never liked the overall feel of the thing; it was rendered in a graphics mode but looked like nothing more than some kind of enhanced ANSI text. Still, while I was driving the 1000TL I used DeskMate‘s word processor to get things written. 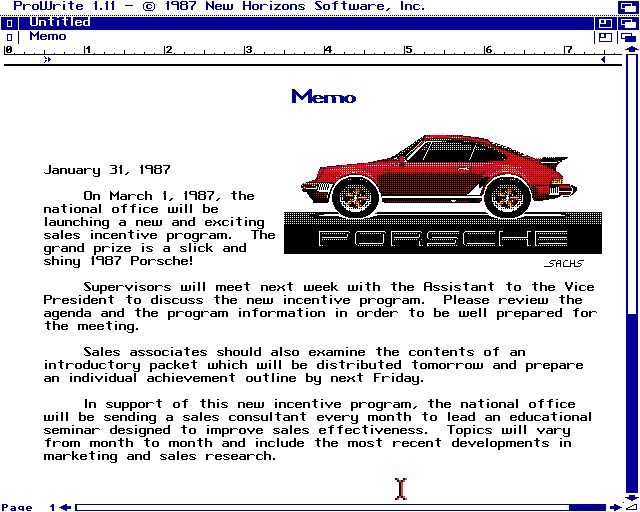 ProWrite on the Amiga 2000 (1989) — ProWrite was the WYSIWYG word processor of choice for the AmigaDOS 1.3-era Amigas. I used this on my Amiga 2000 at the end of high school and in early college, and really put it through its paces. This is the first setup where I experienced something akin to today’s web distraction; I’d be working on a paper and then switch over to browsing dialup BBS forums and back again. I printed documents on an Epson LX-800 dot-matrix printer. 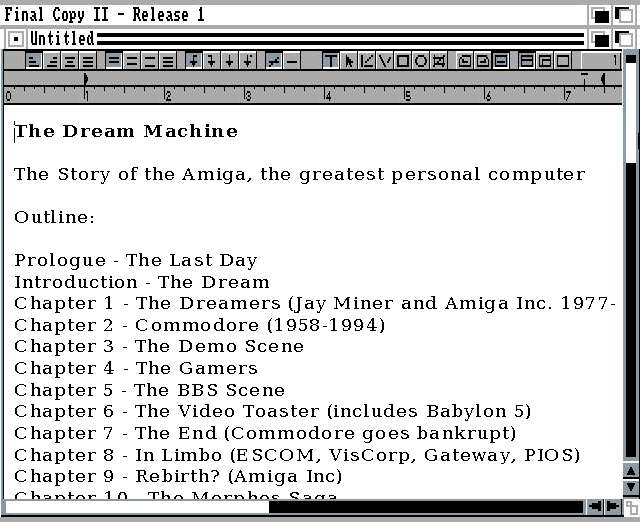 Final Copy II on the Amiga 1200HD (1993) — One of the nicest word processors for AmigaDOS 2.x era Amigas was SoftWood‘s Final Copy II. It had a very clean interface, was fairly feature rich, and was responsive to use on standard config hardware. Final Copy II supported both the standard Amiga Compugraphic outline fonts as well as PostScript Type 1 fonts. I printed out my work on the excellent Epson Action Printer 3250 24-pin printer. 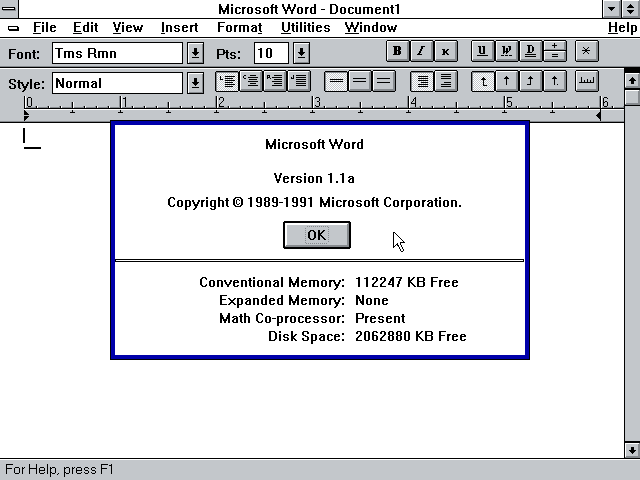 Microsoft Word for Windows on the 486 66 PC (1994) — And, of course, we come to this. Microsoft Word. I ran this on my eCesys 486 66 PC under Windows 3.1 as well as under Windows 95. (How I came by owning the Windows version of Word is an interesting story.) Later, I ran it on my Macs from the Power Macintosh G3 up through my current iMac desktop, and on my work PC and MacBook Pro at the office. I don’t do much word processing these days, but when I do it’s usually in Word. The days of competing word processors really ended after Word had been on the market for a few years.

I’ve not listed every word processor I’ve ever used on the various systems I’ve owned over the years, but these are the ones that stand out the most. As mentioned above, when I do have a need to use a word processor, I typically use Word. I own Pages for OS X and use it here and there, but really my processing of words mostly involves code and code editors like PHPStorm and Sublime Text. My 10-year-old daughter started using a word processor three years younger than I did, and it’s not even a traditionally executing application; she uses Google Docs on her Chromebook, as per her school.

The area of computing that is word processing used to be quite an eclectic field, and I suppose that makes sense given that the early era of home computing was, in most ways, exactly that. Today we have a narrow spectrum of both computing platforms and word processors. They are all feature rich and (more or less) stable, but the field is less interesting, less exciting overall.

Ah, but for the days when word processing was an adventure.