Memories of a Software Rental Shop

I remember the first video my family ever rented. It was a James Bond film, Never Say Never Again. We rented it (on Beta videocassette) from the video rental counter that popped up in our local five and dime, a place that was called Gibsons, in Grafton, Virginia. That was sometime in 1984. I’ve rented hundreds of videotapes and DVDs over the years from many different shops ranging from tiny mom & pops establishments to Blockbuster. But the rental store I enjoyed most was a family-run place called Family Video & Computer Center at the Hilton Shopping Center in Newport News, Virginia. What made that place special to me was that, in addition to movies, they also rented computer software.

What got me thinking about FVCC (no connection to the “Family Video” rental chain found in the Midwest and Canada today) was a recent episode of the Retronauts podcast I listened to, with video and game rental stores as the topic. The show talks about game console rentals — cartridges and CDs/DVDs. Now, while I did rent the odd PS2 title here and there in the early ’00s, I didn’t do it often. What was unique about FVCC is that they rented games and apps for computers. I’m talking about magnetic media. They had titles for the Commodore 64, Apple II, Amiga, and DOS / Windows PC.

I don’t remember just how I found out about the place but, just after it opened, I remember going in and renting the game Echelon for the Apple II. I recall that there was a “NO PIRACY” sign on the wall, but the guy working the counter let me know I could get a free rental by providing a new parameter to copy one of their games (one that wasn’t part of Copy II+ or whatever parameter copier you might have used). Good times.

The way it worked was — as I recall — you were technically buying the software, with an option to return it for retail price minus $5 within five days, or something along those lines. There were/are laws against renting computer software in the United States and things were setup in a way that got around them.

I did most of my renting while I had an Amiga 2000, and they had loads of Amiga software. I recall getting home and loading up a game (on the original disks, to be sure) and seeing a crack screen appear on on boot up. That was a happy sight. I remember being at my Amiga user group in 1990 or so (the Amigoid Life Form Association — “ALFA”), talking to a guy I knew who published one of the commercial parameter copiers for the Amiga, called NIB. I mentioned that (the heavily protected) Shadow of the Beast disks at FVCC had been overwritten with a cracked version. While I was pleased, this developer friend was upset to hear it, as he had planned to rent the game the following week in order to work out a parameter for it to ad to NIB.

I didn’t have call to visit the store after moving from Amiga to a Mac LC, but soon I got my senses back and bought an Amiga 1200HD — from Family Video & Computer Center; with their success they moved from their tiny store to a much larger space a few shops down the strip and began selling Amiga hardware on top of the rentals. 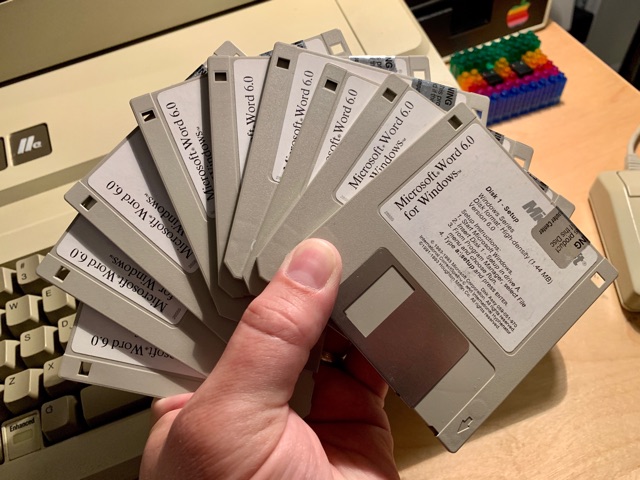 The last system for which I patronized FVCC was my 486 in ’94 or so. I recall renting Fractal Design Painter, Strike Commander, and finally Microsoft Word 6.0. The last was a bit of a fumble, as Word was a set of nine floppies that would only run after being installed on a hard disk. Installing it required allowing the system to write to one of the floppies, and these were all hard-notched to be write-protected. I (stupidly) taped over the write protect hole (instead of just making a copy of that disk to use for the install), installed it on my PC, and then returned it, not really aware of the fact that I had rendered the disks useless for anyone else. That was the day I ended up buying Word from FVCC…

Preparing to write this post, I asked around my regular vintage computing IRC channels, wanting to hear if anyone had ever seen a magnetic media / computer software rental store way back when. No one had, it turns out. Family Video & Computer Center was quite a treasure to me and my friends way back when, and it might’ve been a rather rare one at that. I’d love to hear in the comments if anyone reading this has similar stories to share.

Below is an article that ran on November 10, 1988 in the Daily Press newspaper talking about the establishment.

UPDATE: A reader who lived in my area during that period linked me to an article about another software rental shop opened by the same owner in a neighboring city. The article, published on July 11, 1996 in The Virginian-Pilot newspaper, talks about litigation against the shop named Software Hogs. Another AP story talks about the same.

19 Responses to Memories of a Software Rental Shop