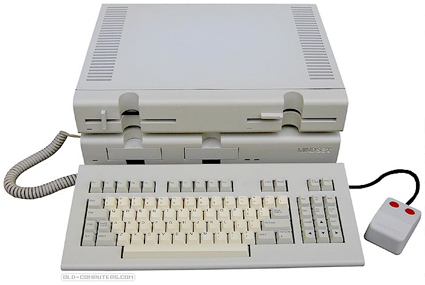 I remember reading about this graphics workstation which was far beyond the capabilities of machines available at the time, in a Creative Computing magazine (Feb. ’85 issue, as it turns out). The machine was a pseudo IBM-compatible unit powered by the rarely seen 80186 (also used in the Tandy 2000). The Mindset had a 512-color palette. Recall that the best standard at the time was the PC’s EGA which offered only a 64-color palette. The Mindset had a 320×200 mode with 16 colors out of this 512-color palette, and also an interlaced 640×400 mode with 2 colors on-screen. Today this would be quite a modest capability, but back then it was pretty amazing.

Not long after the Mindset emerged, Atari rapdily put together the ST to beat Commodore’s Amiga to market (which it did). When I heard the graphics specs of the 520ST, the first ST out the gate, it struck a chord in my memory. 320×200 with 16 colors out of a palette of 512. Well, in an interesting twist it turns out that the Mindset was designed by two ex-Atari engineers. It’s not quite clear just how this or that bit of video hardware design went this way or that, but there would seem to have been some “sharing” there.

At any rate, I am rambling on like this because the machine made an impression on me long ago, but I never heard anything more about it. Web searches always came up fairly dry, though I was in e-mail contact with a fellow who owns two of them. At any rate, to attempt to remedy the situation, I took the Creative Computing magazine in question, which I had since acquired, and scanned in the photos and synopsized the writeup and submitted the lot to Old-Computers.com, a site that tracks all kinds of information about a great number of old machines. They were kind enough to wrap it all up into a full profile about the Mindset computer. So hopefully I have helped fill in a void that existed in the on-line world. Everyone can rest a little easier now.

I also ran across the full text of that Creative Computing article, which can be seen here.

UPDATE (10/20/04): It looks like someone donated a Mindset computer, in excellent condition, to Old-Computers.com, making it a very good source of info and photos of this rather unique machine of the mid-80’s.

22 Responses to The Mindset Computer