In my opinion, Asteroids is one of the very best videogames of all time. I guess that’s probably obvious. Lately I’ve been playing a related series of Asteroids-inspired games that are old enough to be considered retro, themselves. They were pretty popular back in the day, and you’ll hear about that in a post, here, soon enough. But my favorite Asteroids remake of all time is a game far fewer will have heard of. It’s a game I spent a lot of time with this past Christmas, as well as during the Christmas of 1986, 25 years ago.

That game is Megaroids, by Mike Bunnell, with audio by his brother Mitch.

Megaroids was released in 1984 for the Macintosh by Mike Bunnell, then of Megamax. It was bundled with the Megamax C compiler, as an example of what the system could do. (The source code was available for a small fee.) When the compiler was released for the Atari ST in 1985, Megaroids was ported and bundled with it, as well. And, for a while, Atari included the game as a pack-in title with the early Atari ST systems, which is how I first came to know it.

I’ve played the Mac version a few times — I’ve got it on my Mac Plus right now. But it was the Atari ST version I fell in love with. The game was unusual in that, on color ST systems, it was rendered in the “Medium Res” mode, at 640×200 pixels in four colors. But, interestingly, the developer employed some manner of frame swapping that sought to increase the apparent resolution by rapid color switching, while introducing some flicker. It made the game look pretty outstanding on a color Atari ST. The 640×400 “High Res” monochrome mode was also supported on the ST, for those with an SM-124 display.

A few months back I captured some video of the game running under an emulator on my Windows 7 box (though I prefer playing it on the real thing). Have a look.

Knowing I’m close to posting my other Asteroids-related story, I wanted to go ahead and share this one, to prime the pump, so to speak. Shortly after capturing the above video, I located Mike Bunnell, who’s presently CEO of Fantasy Lab, and shared the piece with him. He seemed pleased for the stroll down memory lane.

UPDATE (7/2011): In my email back-and-forth with author Mike Bunnell, he spoke to the effect he used in the ST’s medium res mode to increase the apparent screen resolution. Most interesting.

UPDATE (08/2011): I’ve been playing with DOSBox on the PC, looking for EGA games and ran across EGA-roids, a ‘286 EGA conversion of Megaroids! See the game in action.

UPDATE (10/2015): I’ve been making custom watch face images for my 42mm Apple Watch running watchOS 2.0 and one of the faces I made is a tribute to Megaroids. Whaddaya think? 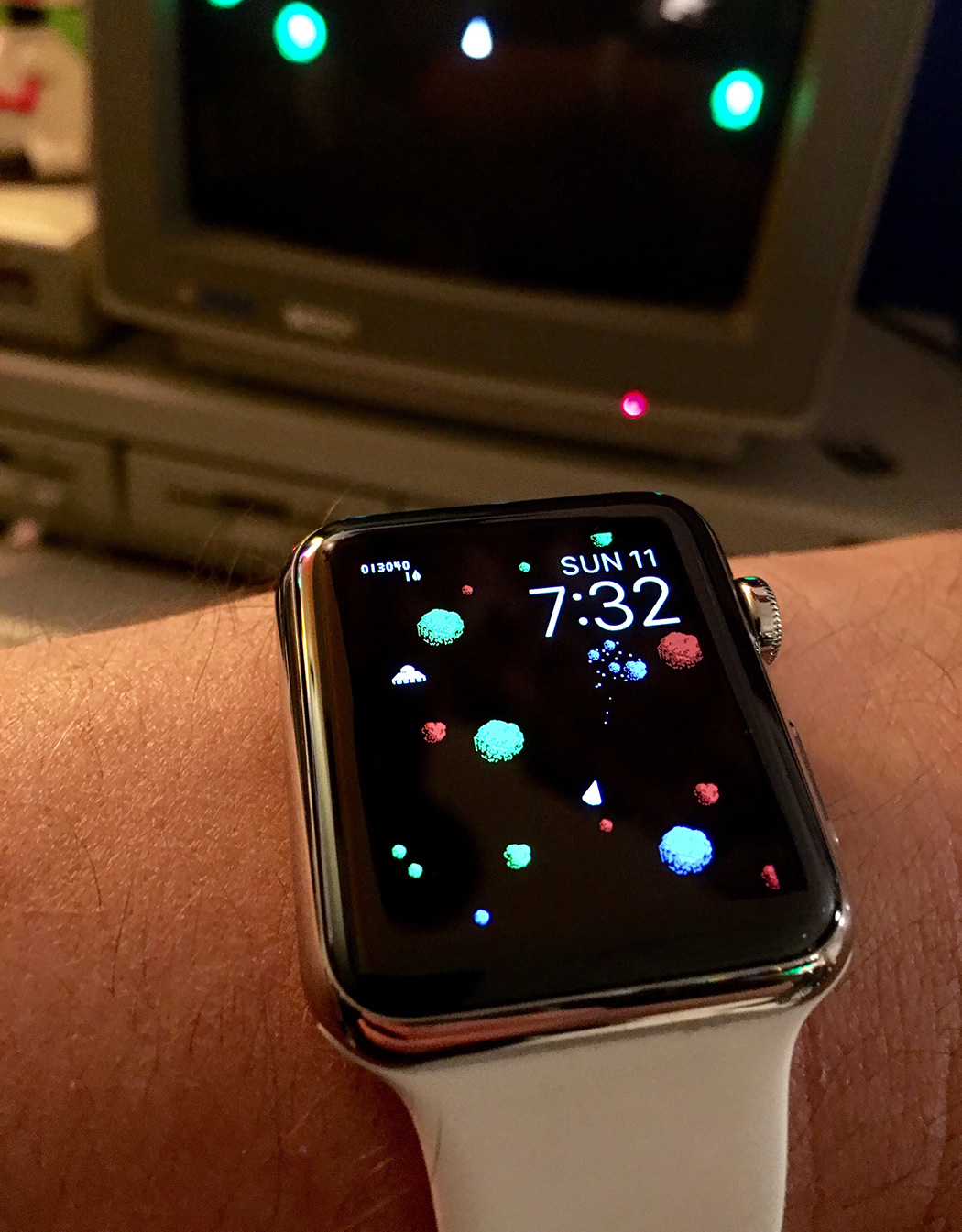 This entry was posted in Atari, Macintosh. Bookmark the permalink.