I’ve owned a lot of computers over the years, and I still have quite a few. “Computing” has been my all-encompassing hobby / interest / passion for most of my life. When it was time for college, I got a BSCS degree and am, presently, 16 years into my CS career — and have been self-employed for the last year and a half, thankfully!

But, it had to start somewhere.

This week I was down in the Hampton Roads, VA area where I grew up, on a little trip with my family. While there, I stopped in to visit my mother. As we chatted, I noticed a polaroid sitting on her bookshelf. It was a photo of me, taken on Christmas morning in 1979 (I was 7). Our family photo boxes are full of Christmas morning pictures like this one, so it didn’t really strike me at first — I’m surprised I even picked it up. But, I did, and as I looked at it I happened to notice something in the background. It was my old Atari 2600 console, along with a black and white television I was given for Christmas that year. And, then it hit me. 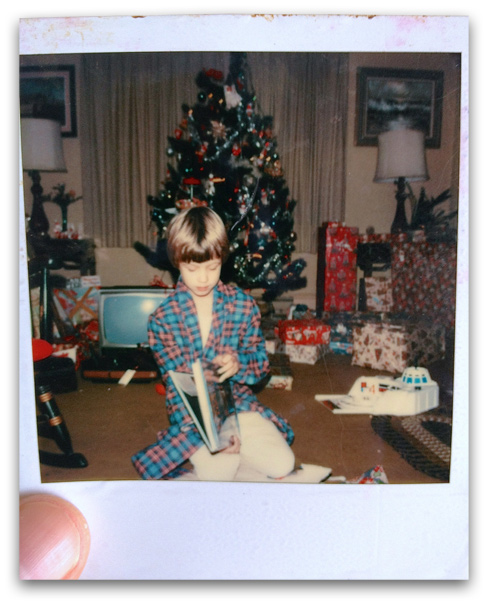 This was a photo of me taken just moments after I received the first computer I ever owned. The overpowering force of my life grew from the seed of this moment, captured on (instant) film, so many years ago.

In truth, I didn’t hit the ground running. I got excited about the Atari 2600 when my uncle Alfred setup a 2600 in his river house in Deltaville, VA. We would visit, and I’d have a great old time playing Combat, the only game he had. My folks noted this, apparently, and got me an Atari and a TV to play it on (so as to not clutter the family TV with the console). When I look back, I think the problem was the TV — it was black and white, and Combat looked pretty weak on it. So, I didn’t really jump into the system, and it sat mostly dormant for a year or two. That’s when I started seeing some cool games other than Combat on friends’ Ataris down the block — on the family room color TV. So, I moved my Atari into the den, wired it up, and asked my mom to take me out to buy a game cartridge. I can’t be sure what the first one was, but it was probably PAC-MAN or Demon Attack.

Thanks for the present, mom and dad.

This entry was posted in Atari, Just Rambling. Bookmark the permalink.