Posted on January 2, 2008 by Blake Patterson 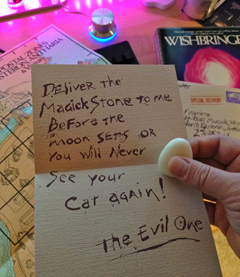 I purchased what I believe to be the first Amiga sold in the state of Virginia back in October 1985. To say there was a dearth of software for the platform at that time is an understatement. I ultimately sold the unit in March or April 1986 for that very reason. Well, that was part of it. At any rate, I had it for a brief time and the best game I played (and solved) on it, amazingly, was Infocom’s Wishbringer by Brian Moriarty. Yes, a text adventure. How ironic, but I loved the game.

I’ve been trying to think of new and interesting evening entertainment for my wife and me after our daughter goes to sleep, and it occurred to me that text adventures by laptop on the couch might be fun. My wife and I are both Sherlock Holmes fans and so Infocom’s Sherlock: The Riddle of the Crown Jewels seemed like a natural as did, of course, Wishbringer. 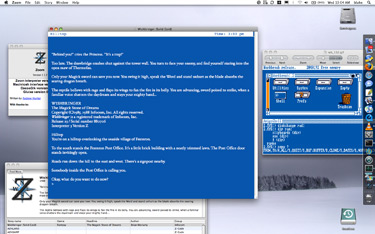 We’re starting with Wishbringer tonight as I’m still trying to get my hands on the full Sherlock game and bundle somewhere (likely as part of The Lost Treasures of Infocom II). Since I played Wishbringer on the Amiga with its distinctive white on blue Intuition interface, I wanted to try and recapture that feel on the replay. I think I’ve done a pretty good job in doing so. I grabbed the Mac Z-machine interpreter Zoom and have configured it to exactly match the default Amiga Workbench color scheme. As you can see from the screenshot, it’s pretty much there aside from the relatively pixelated Topaz font.

I think it will be a lot of fun. I’ll let you know how it goes.