A Few Words from a “No Man’s Sky” Time Traveler 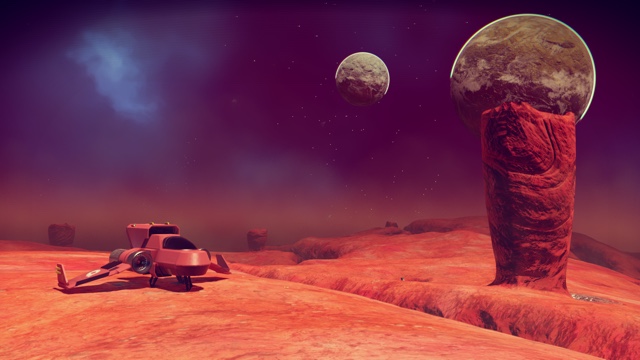 As those who follow me on any of my social feeds are quite aware, I enjoy the game No Man’s Sky. Actually, that’s something of an understatement. I’ve written quite a few words about the degree to which the boundless universe that Hello Games has given us to explore has captivated me in various blog posts over the past two and a half years. In the first of these, written three weeks after the game launched back in August 2016, I explained,

All my life I have dreamed of exactly this in gaming — an interesting, alternate universe, massive in scale, in which I can freely wander and explore at my own pace. That is what No Man’s Sky is to me, and it’s my observation that many others are similarly moved by the game. The fact that the universe is procedurally generated and that even the game’s creators can’t describe everything that’s out there to be encountered ads to the incredible sense of the unexplored, the alien. There is a lovely feeling of solitude to the whole experience of discovering a world, leaving your mark on it, and moving on to the next. 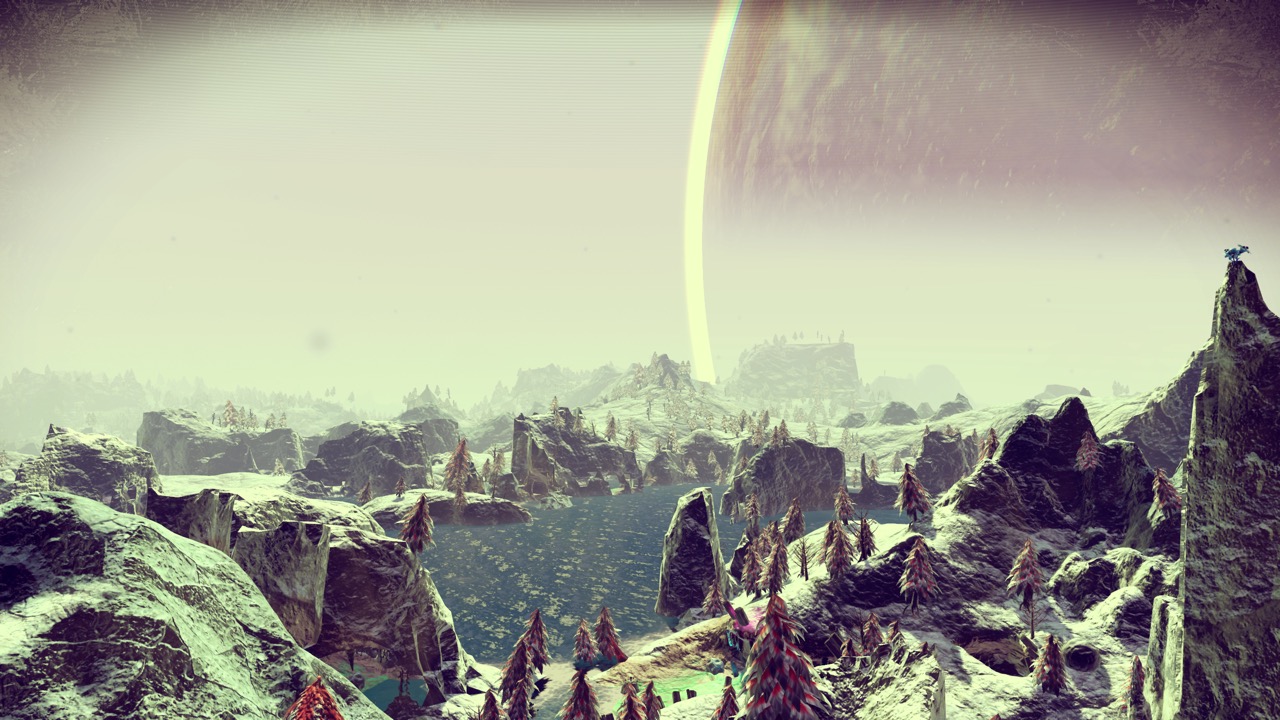 I began playing the game on the PS4 back on its launch day in August 2016. I was so completely drawn into it that just a few weeks later I decided to build a high-end gaming PC — something I hadn’t done in many years — in order to get the best experience possible in the No Man’s Sky universe. The system I built was able to achieve a higher resolution at a higher frametrate than the PS4, as well as allowing mods to be run (which, in the end, I decided to stay away from in the interest of experiencing the gameplay as intended by the developers).

It wasn’t until a week ago, however, that it enabled me not only to travel across the vast and myriad galaxies within the universe at the heart of the game, but to travel back through time within that universe, as well.

I stepped into No Man’s Sky for the first time nearly 1,600 in-game hours ago. Back then it was just you and your tiny starship thrown down into an alien universe, devoid of context. I remember waking on a rocky ice world with strange, long-necked creatures darting about. After gathering my wits, I set off exploring…and I haven’t stopped yet. 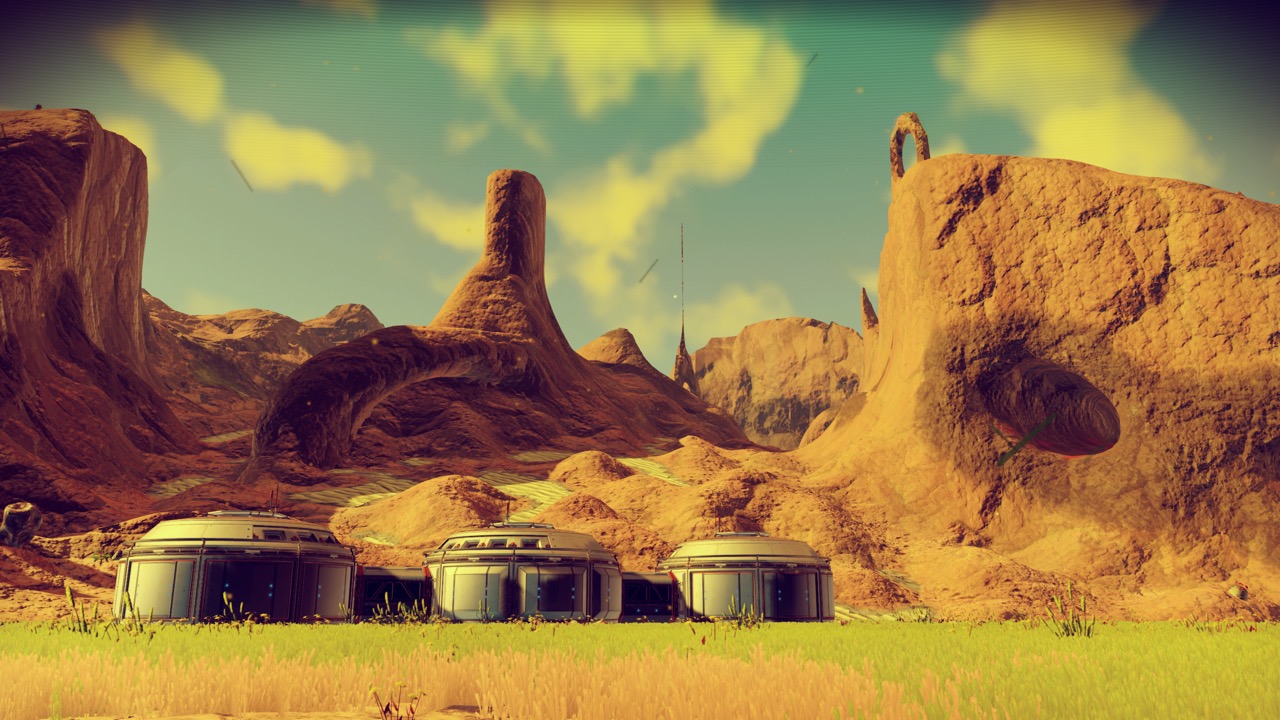 While there were plenty of planets devoid of life and exuding an unsettling eeriness in this new universe, others featured incredible and varied structures of rock — craggy and endless formations that one could explore for days. Or lush fields and slopes and jungles, tangled with colorful flora arrayed wildly across dramatic landscapes that demanded no less exploration. Frozen worlds of howling storms were sometimes too severe to host but the very occasional tree, vine, or bud. These worlds were not at all tidy and they were jagged, fractally chaotic, and often peppered with structural glitches. It was very much a “Wild West” of sorts, out there. The worlds were pitted, they were often absurd, and they were magical to me. After all, I grew up playing Rescue on Fractalus.

After several months of radio silence following the launch, Hello Games released a major update known as Foundation (v1.1). It brought a variety of new features to the game, including base building, which I still consider to be the best enhancement No Man’s Sky has ever received. (I was quite happy to have a place to drink my coffee and gaze out across the alien landscape with the sound of rain pattering against the windows.) 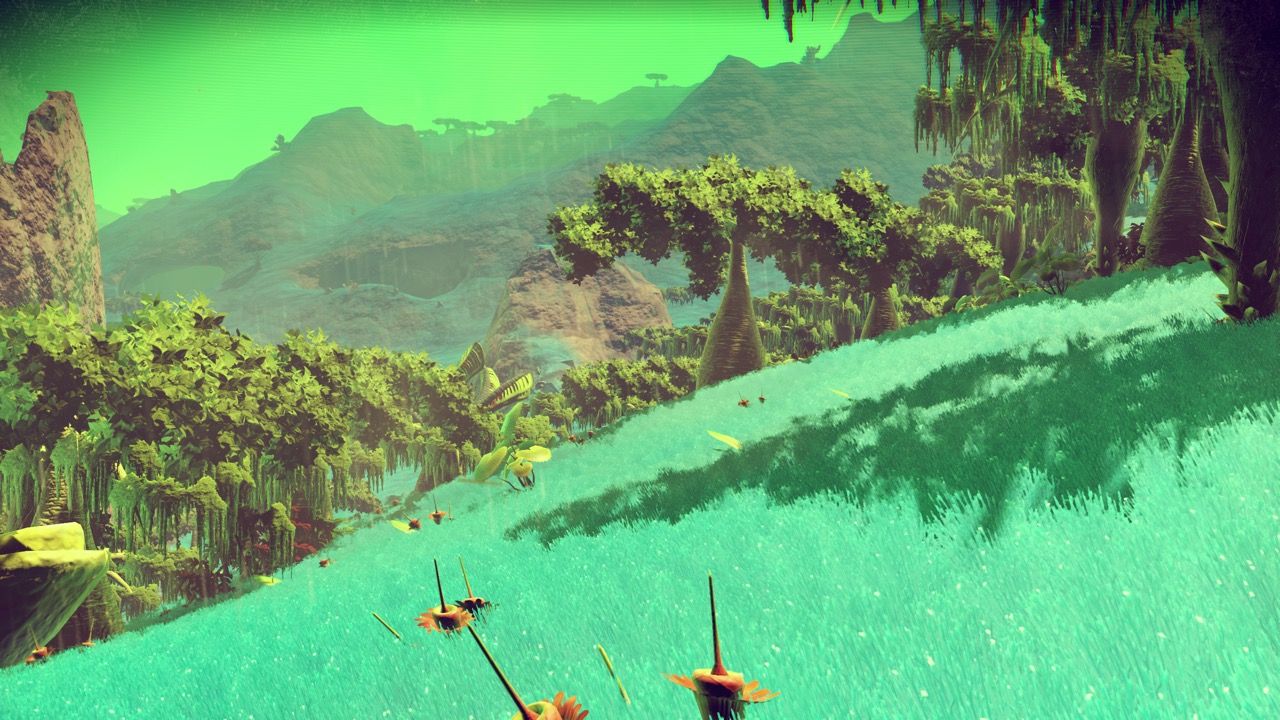 As the months passed by from then to now, No Man’s Sky has received three major updates, two mid-level updates, and many smaller feature and maintenance updates — nearly 45 updates in all, and all of them free. (What’s more, a fifth major update set for summer release has just been announced: No Man’s Sky BEYOND.) These updates brought iterative enhancements to the graphics engine and terrain rendering systems and expanded the game with many new gameplay elements, including freighters, ground vehicles (with racing), new biomes, portal travel across galaxies, a major underwater overhaul, additional lore quests, and — yes — the online multiplayer elements (delivered in stages) that so, so many were fretting and screaming for at the original launch. 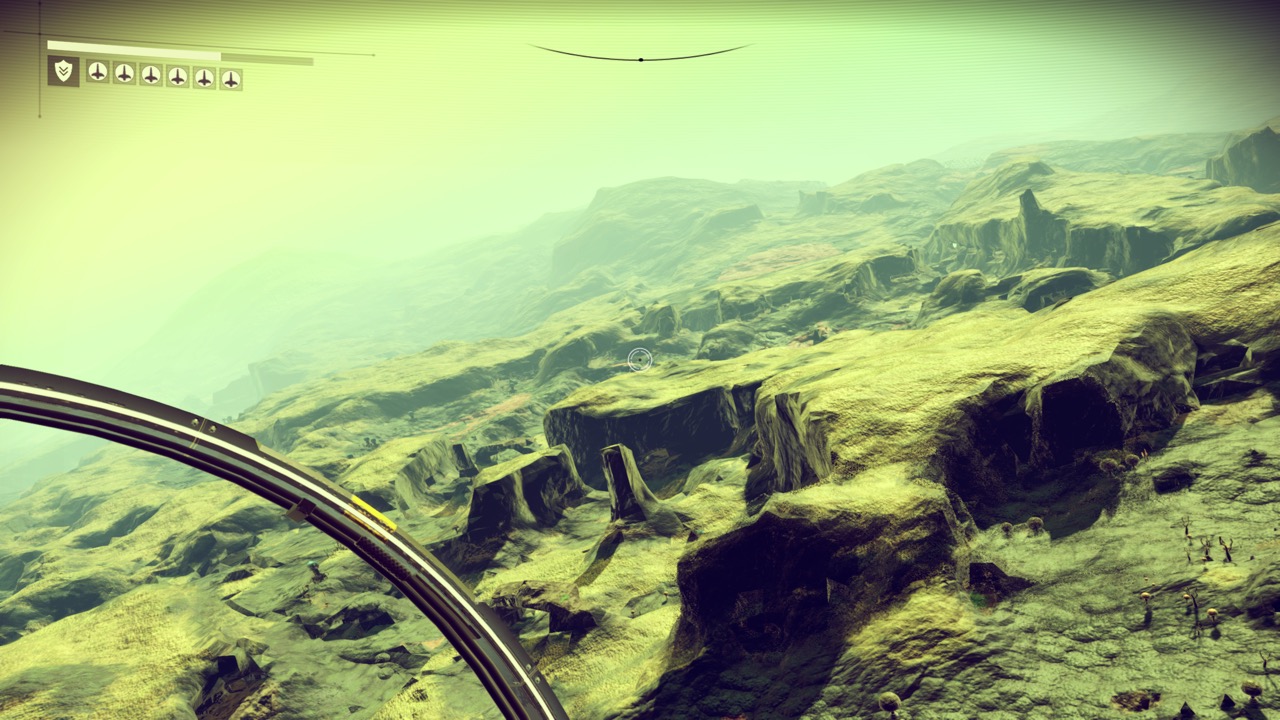 I will point out that I was not one of these people; I never expected or asked for online multiplayer, and have little utilized it since it arrived. The likely reason for why that is the case is well explained by Mithrandiel in his insightful post, No Man’s Sky Doesn’t Have a Multiplayer Problem, Gamers Have a Solitude Problem. I like the solitude.

So, the game we have today is much “cleaner” in its planetary terrain, less of an endless sort of bramble. Things are tidier. This is more conducive to ground vehicle travel, and things overall appear more coherent, in a way. The biomes seen early in the game are represented, along with new, more alien biomes hosting towering alien structures that dwarf the player and are quite surreal. It is an amazingly beautiful game with a rich atmosphere and lovely ground tessellation that adds realism to the terrain. But being cleaner, tidier, there is noticeably less of that “Wild West” feeling of the early releases. I’ve kept a photo gallery of my travels across all versions of the game and the shift in aesthetic can be seen there. No Man’s Sky is a far more full-featured game now than it was when it was released, and that clearly appeals to most gamers who have jumped in. In fact, it just recently won the SXSW Gaming award for Most Evolved Game. But…I like the solitude. I like the fractally chaotic. 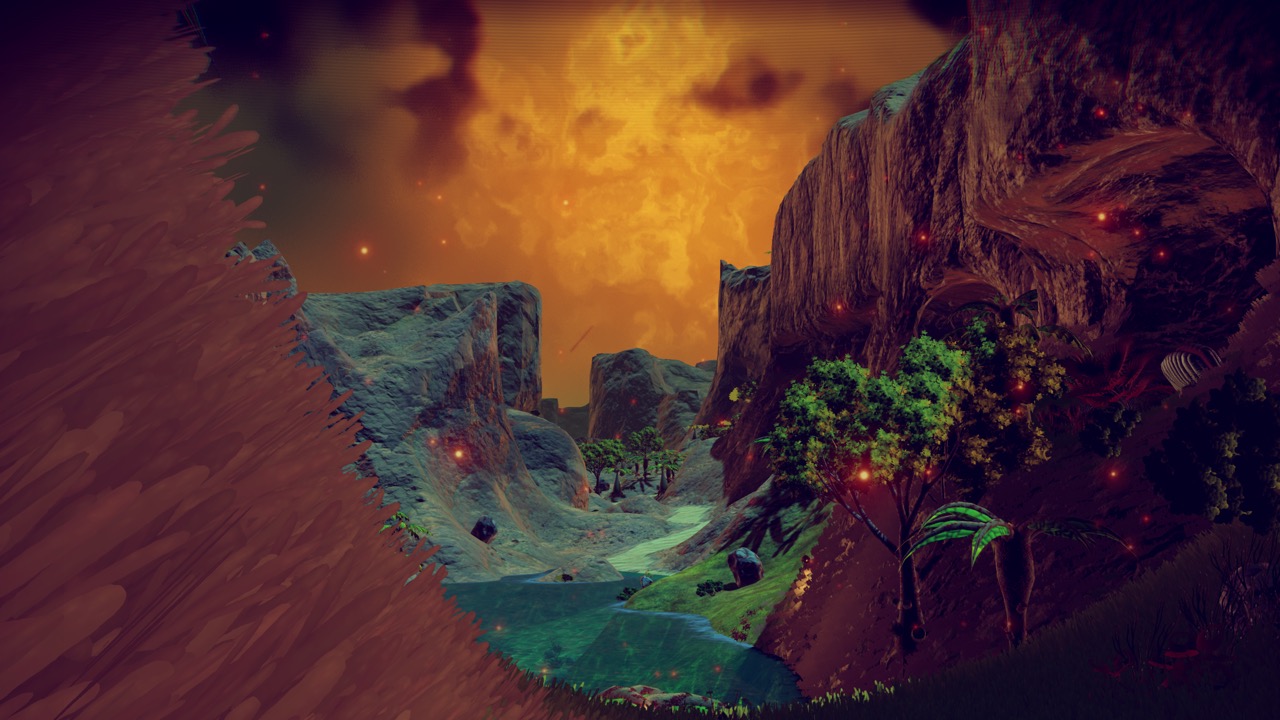 Recently, I happened to be poring over the aforementioned travel gallery, looking at early moments in the game, when I was alerted to the subreddit r/NMS_Foundations, which is a place for sharing screenshots and memories of early adventures within the No Man’s Sky universe. There I found several players who had installed earlier versions of the game and were reliving those “Wild West” moments. It was then and there that I decided to archive my No Man’s Sky NEXT v7.7 game and save files and install the version of the game of that inspired my fondest memories: Foundation (v1.1). And so I did. Additionally, I petitioned the mods of the official No Man’s Sky Discord to create a space for people like myself to exchange tales of adventure, and they have: nms-legacy. (Stop in for a visit!) 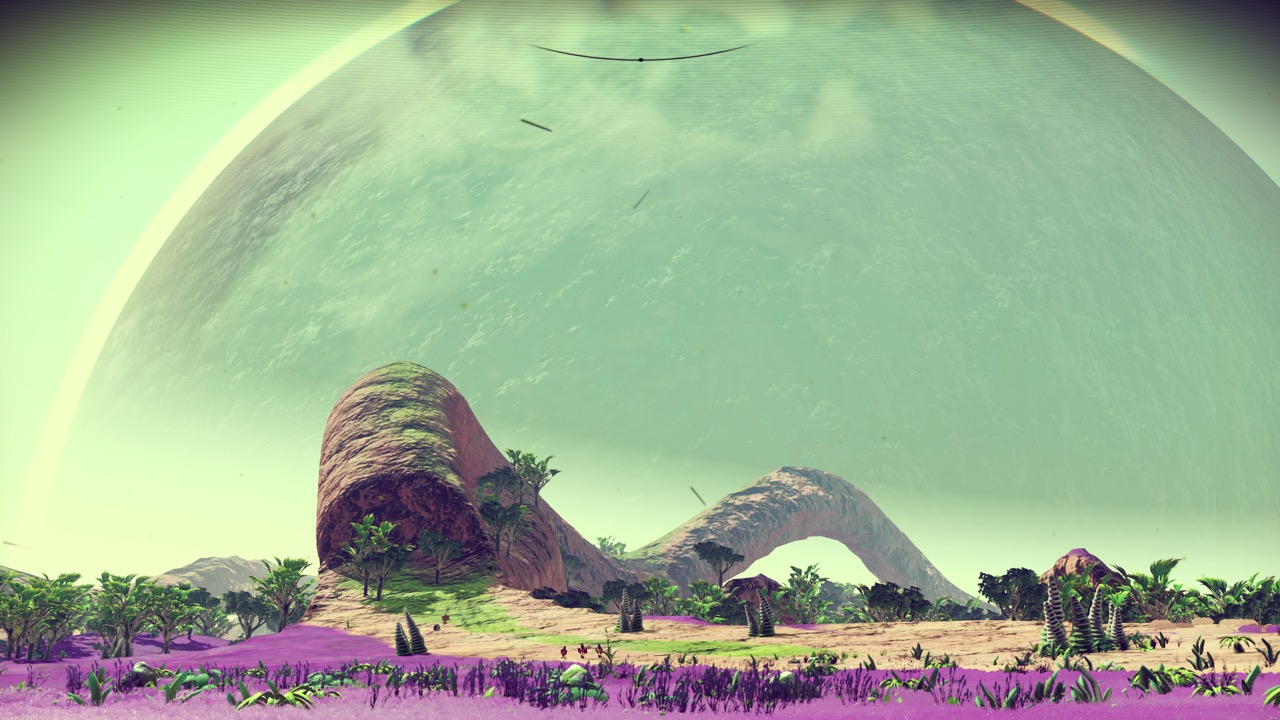 I am now 25 hours in on a fresh start in the Foundation universe and it has brought back so many great memories. The brambly, jagged worlds of old laid out before me have been a true pleasure to explore — imperfections and all. I am loving it in a huge way. True, I am cutoff from multiplayer, weekly social events, my discoveries being logged online, and so many gameplay elements that have made No Man’s Sky more popular than it has ever been. And there’s grass growing through the floor of my base. But, that’s fine. I like the solitude, and the solitude I feel being one of a tiny handful of people experiencing the very early days of this vast universe is even more profound than it was when this was the current state of the game. It had been a long time since I woke up early on a work day to get in some No Man’s Sky game time, but here we are. As such, it’s my intention to stay in this early period for the foreseeable future and eagerly do what I’ve always loved best: Explore.

( I have setup a page of helpful links to assist others that may want to jump back to Foundation, as well. )

It is my hope that as Hello Games continues to evolve No Man’s Sky, they consider tousling it’s hair a bit — bringing back some of that “Wild West” vibe that some of us, if but a minority, so very much enjoyed.

( All photos shown in this post were taken in my recent travels in the No Man’s Sky Foundation universe. See my new Foundation travel photo gallery. )

Previous posts I have written about the game can be found below:

This entry was posted in Gaming, No Man's Sky and tagged Atlas, gaming, Hello Games, No Mans Sky, PC, PS4, Traveller, Xbox One. Bookmark the permalink.