On the Passing of a Visionary

Posted on November 3, 2011 by Blake Patterson 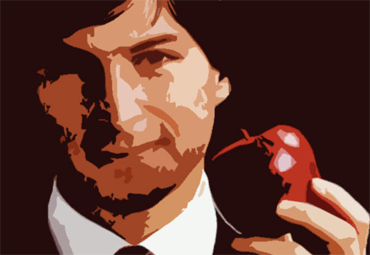 On October 5, now almost a month ago, Apple co-founder and CEO Steven Paul Jobs died of respiratory arrest resulting from a lengthy battle with pancreatic cancer. Of course, everyone reading this post is certainly already aware of it. Steve Jobs has had such a profound impact on my life over the past 25 years, and his exit from this world has been so impactful to me, that I wanted to get into the proper frame of mind and craft a reaction piece that would express my feelings for readers and posterity in a manner that I would deem sufficient, relative to the challenge.

But, it has not worked out like that. Time is passing, I’m not in the proper frame of mind, and I confess I’ve been dreading writing this post. I need to share something, however, and each passing day has made me more ill at ease regarding the nonexistence of this post. And, so, here is a ball of somewhat disjointed thoughts and feelings I’ve been carrying around for the past month regarding a man the world is now without.

Steve Jobs’ death came as a shock, although it should not have.

I was hastily doing some mundane thing or another on my MacBook when I saw the tweets that Wednesday evening. There was no question in my mind that the he was not far from death as I sat there in Moscone West, watching him deliver the WWDC 2011 keynote on what would be the last occasion I would ever seen him in person. Seven years earlier I watched my father-in-law lose his battle with leukemia, and so the transformation I saw Steve undergoing during the last years of his life is one that I had watched closely, before. 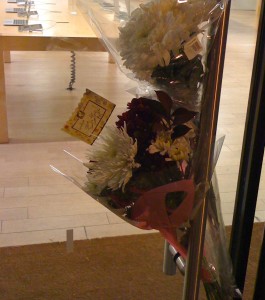 But, still, it was a shock. And, at first, it seemed impossible to believe. A man of such vision, one who had so dramatically affected my own life and who had changed the world we live in — who had handed us the future — how could something so comparatively petty as a failing human body take him away from this world? It did not seem real. These were my thoughts soon after hearing the news of his death.

As the hours passed, I began evaluating his death in a broader, farther reaching manner. I began thinking of the long path of change that he began cutting back in the ’70s and that continued hazily, beyond our ability to see, far into the future. I began thinking of his critical role, so long ago, at the birth of Apple Computer, Inc. Of his historic visit to Xerox PARC. Of his shaping the Apple //c (the first Apple product I ever owned). Of his creation of the Macintosh. Of his departure from Apple and creation of NeXT, which came to teach him a great deal about humility — an experience that tempered the man. And of his triumphant return to Apple within months of bankruptcy, only to transform it into the most valuable company on Earth. These things, the stuff of epic storytelling. My thoughts here were perhaps less about him as a person and, more selfishly, about myself and humanity and hope for the future.

Later that night, around midnight, I was compelled to drive out to “my” Apple Store, the one located in Clarendon, VA. I felt very lonely and it seemed the obvious thing to do. It was quiet there, but on the door of the stoor I found a bouquet of flowers with a card to Steve. I returned to the store several times over the next few days, for no reason other than that it just felt necessary to visit. I never even went inside. 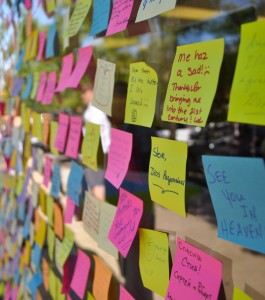 But, over the course of those days the bouquet of flowers turned into a massive outpouring of love and thanks for the now-departed visionary that had touched the lives of everyone who posted a note on that glass storefront. And, these were people that had almost certainly never even met the man.

The saga of the r/evolution of the personal computer is one I have followed since I unboxed my first, back in 1982. My adventures with my first Apple, which began in 1984, were overwhelmingly fulfilling. From then onward, the technology that Apple brought into the world was a huge part of my life. I didn’t always have an Apple as the years moved by, but I usually did — I usually had several. When Jobs left Apple and formed NeXT, I spent a great deal of time in the bookstore poring over Bruce Webster’s The NeXT Book, lusting after the elegance of the black hardware and its operating system. In college I took out a $5K loan and purchased a then-extremely-high-powered 486 workstation fabricated specifically to run NEXTSTEP for Intel. And, several years later, the very instant that I read the news that Apple would be acquiring NeXT and Steve Jobs to create the next generation Mac OS, my decision to go back to the Macintosh was made. And, here I’ve happily been ever since.

To illustrate the degree to which the creations of Steve Jobs and of Apple have affected my life, I have constructed a timeline of Apple and NeXT-related systems and devices I’ve owned over the past 25 years. I, myself, find the list rather interesting to look at, laid out like this.

The influence that Steve Jobs and Apple have had on my life is not just about the use of the systems they created and how they bettered my day-to-day. They also shaped my professional life.

After working with MacRumors.com for about two years, I started my own blog, iPodHacks.com, that tracked news surrounding the product that marked Apple’s entry into consumer electronics. I started it in 2001, shortly after the iPod was announced, and ran it for basically seven years. From there I co-founded TouchArcade.com, the popular iOS game news and review website, and ran it for three years, like my earlier blog work, as a side-job while working as a web developer during the day, until finally going full time early this year. I have been blogging about Apple products for basically 13 years and it is now my full-time job. Steve and his creations altered the course of my career.

The amount of fulfillment and enjoyment that I have derived from following the saga of Jobs’ work is, happily, not something that I missed along the way. I was quite aware of how fortunate I was to have as my core interest a scenario that excited me so, unfolding around a living legend, and I often expressed this to friends. I lived — we lived — during a time when a giant walked among us, and I feel extremely fortunate to have had the experience.

And, of the future? While Steve Jobs was certainly the dealer of lightning, no one man can bring all that Apple has brought, single-handedly. He returned to Apple and began transforming the company a long 14 years ago. In that time, he surrounded himself with a team that obviously worked, and every success left its mark in Apple’s corporate memory. Jobs brought us this far, and I do truly believe that the machine of innovation he created — twice — will continue reaching into the future and handing it out to us, piece by piece.

Steve Jobs pushed the human race forward. He was crazy enough to think that he could change the world, and that’s exactly what he did.

This entry was posted in Apple II, Just Rambling, NeXT. Bookmark the permalink.

5 Responses to On the Passing of a Visionary