Posted on October 7, 2011 by Blake Patterson

After posting the “Here’s to the Crazy Ones” video the night that Steve Jobs died, I had thought that my next post would have been the one that I very much have to write, explaining what the late visionary has meant to my life, these long years. It’s been difficult to get into a mindset of calm reflection conducive to getting those thoughts out in as clean a fashion as I’d like, and so I’m pleased to be able to share a tribute to the man, of a different sort, while I wait to get where I need to be in order to get out the long, quite necessary piece. 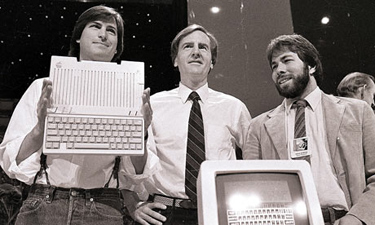 Chris Baird, a regular (cjbaird) in the #a2c.chat IRC channel at irc.a2central.com where I am also a regular, created a rather touching tribute to the late co-creator of Apple in the form of an Applesoft BASIC program. Chris, by a variety of means, took the popular black and white portrait of Jobs and converted it into a series of BASIC DATA statements with a few lines of display code up front. The program, which takes about 15 minutes to fully execute on a stock Apple II, renders the man in 280×192 black and white pixels across the display of any member of the Apple II family.

I was anxious to see it run on one of my Apple IIs, and I chose the Apple //c on my shelf, as the //c was the first Apple product I ever owned, and Steve Jobs contributed notably to the design of the machine, even while the Macintosh project was underway. The it’s-all-built-in //c was Jobs’ vision of the Apple II as an appliance. (Though, my Ethernet-equipped Apple IIgs was used in the process of getting the disk image from Internet to floppy.)

I recorded a video, most of which is sped-up to help out the //c’s 1.02MHz 8-bit processor, and wanted to share it with those who may not so easily be able to watch this touching tribute “in person.” I have set the video to the Music Recital – Sonata tune from the The Apple at Play demo floppy that came with the Apple //c, pictured. The music you hear was generated on an Apple //c with its meager, stock audio hardware.

A high resolution photo of Steve Jobs, fully rendered on the Apple //c’s display, can be found in my Flickr photoset.

This entry was posted in Apple II, Just Rambling. Bookmark the permalink.

One Response to An Apple //c’s Tribute to Steve Jobs