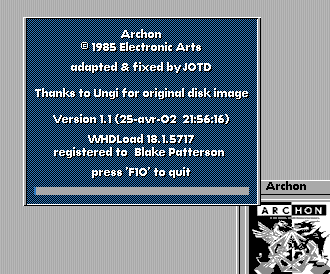 I’ve been in the retrocomputing scene for about 15 years now and in that time I’ve seen the interest in the pursuit grow more and more. This is in large part due to the evolving technology that has brought devices that have made vintage hardware more accessible to users. One of the most influential class of devices that has made things easier for retrocomputing folks is the flash memory-based floppy disk emulator. No longer are physical spinning floppy disks needed to boot up most vintage systems, thanks to these embedded controllers that allow disk image files sitting an SD card to be used in lieu of physical media. I personally have such devices installed in three systems: an Apple IIe, an Atari 520ST, and an Amiga 2000. In the case of the last, however, the floppy emulator is hardly needed, and that’s because of something the Amiga community has going for it that I consider to be much, much better. It’s called WHDLoad, and it’s a dream come true.

WHDLoad is an entirely software-based system designed to allow users to quickly and easy launch floppy-based games and demos and have them accurately run on the entire range of Amiga hardware. It was originally released in 1996 to address the issue of games running improperly or not at all on more recent Amiga systems featuring more powerful MC680x0 CPUs, the more advanced ECS and AGA custom chipsets, and newer versions of AmigaDOS.

WHDLoad works like this: Once installed, the user chooses a title from the lengthy (and growing) list of supported software and provides the original floppies for it. The system reads the floppies and writes out disk image files to the hard disk and effectively patches them so that they run on the local system just as they would on their original, target spec Amiga.

The video below (not mine) shows WHDLoad in action, running once-floppy-based games and scenedemos on an Amiga 1200.

The main advantages that WHDLoad brings, include:

I am enjoying spending some quality time with my Amiga 2000 over this holiday break, and that means taking advantage of all that WHDLoad brings. Lately I’ve been going through the featurelist / changelog text that comes with each title’s patch set, trying out the different tweaks and customizations listed, and in so doing have been really impressed with some of the performance enhancements I’ve seen. For example, the program code in EA’s Marble Madness (which needs Kickstart 1.3 ROMS — WHDLoad swaps them in during loading) has been modified to utilize a system’s “FAST” RAM, which is twice as fast as “CHIP” RAM, resulting in glass-smooth full-screen scrolling, better than that of the unmodified title. Another example is the excellent Stunt Car Racer, to which the patch author added a Turbo mode that increases the game’s framerate. Telling WHDLoad to enable my 68020’s caches via soft-switch makes the game faster still — so much nicer than the unmodified original game.

To see the challenge involved in getting some of these older games running on more recent Amigas, read the installer / fix text associated with Electronic Arts’ Archon, released for the Amiga in 1985, which in its native form only runs under the 30-year-old Kickstart 1.0 or 1.1 “ROM.”

Over the past 19 years WHDLoad has grown to support several thousand games and demos. Just using the Amiga’s native Workbench to open a directory of games and, after a double-click, having a title load instantly and run perfectly is the best possible platform experience. It’s an entirely software-based solution that’s so much cleaner than hardware-based floppy emulators and, as of this month, it’s free! The registration (for a small fee) keyfile is no longer required to use WHDLoad unencumbered.

My vintage computer collection spans many platforms, but I’ve seen no enabling technology for any other system that comes close to what WHDLoad brings to modern-day Amiga users. I think most retrocomputing fans outside of the Amiga community are probably unaware of this amazing boon that today’s Amiga users are able to enjoy, and so I wanted to share the details of this system with readers. There’s no reason many other platforms couldn’t enjoy similar floppy-elimination systems, if only they were developed for them.

WHDLoad requires an Amiga running Kickstart 2.0 or greater and 1MB of RAM or more. A 68010 CPU or better is recommended, as some installs require the VBR for the ‘quit to Workbench’ key feature. It’s worth mentioning that WHDLoad allows a given Amiga to run games and demos targeting equal or lesser custom chipsets (you can’t run AGA games on an ECS Amiga).

Hats off to the WHDLoad team, and thank you. (I registered twice.)