Posted on September 15, 2015 by Blake Patterson

The other day I got into a “what was the first CD you ever owned?” discussion on Twitter. My first was Songs from the Big Chair by Tears for Fears. I purchased the CD in 1985, a few months before I had a CD player of my own, just so I could see what a compact disc looked like up close. Thinking along these lines, I recalled the experience of getting my first CD player back in 1985. I thought I’d share some memories from way back when, and would much enjoy hearing readers’ similar experiences.

After purchasing that first CD, I kept after my parents to get me a CD player of my own. After a few months, they took me to the local Circuit City and I selected a player. It was the Pioneer PD-5010, a component unit of the standard stacking width, sporting an eject button and a slide-out tray. As I recall, a sales rep helped us (me) choose the model, and it was the CD+G video support that made me go for the 5010. Sadly, at the time I had no idea how to acquire a video cable to connect a display to the unit, so the CD+G feature went untested for the life of the player (which was about three or four years; the tray finally stopped ejecting).

Being a stand-alone component unit, the Pioneer CD player required a separate receiver / amplifier to output any audio. Luckily, I had a stereo system on hand that was up to the task. And, as it happens, it was nearly the center of my universe at the time.

On my 11th birthday, May 21 1983, good ole’ mom and dad gifted me with a compact stereo / cassette system. Previously, I had one of those el cheapo record players in a cardboard case with a lid that latched shut and a few 45’s to play on it (ABBA, Air Supply, Tony Basil). I had a little Radio Shack transistor radio, as well. And, sometimes I’d play a cassette in my dad’s Sanyo system down in the den (I had ELO Time and little else).  But, I never had my own stereo system before. That all changed when I tore open that brown cardboard box and pulled out the 10-watt Sears LXI stereo system with integrated cassette deck and 5-band graphic equalizer. Ahh, yes, to my eyes and ears it was a beautiful and magical thing. I can still remember the new-electronics smell it gave off after heating up for a bit.

I recall setting it up on the desk next to my TI-99/4A system, situating the speakers, screwing in the FM antenna wire that ran up the wall, and turning it on for the first time. I rarely listened to the radio before this, just whatever my parents had on in the car, so I ran a ways up the FM dial and landed at 104.5. The song “Always Something There to Remind Me” by Naked Eyes was playing. I’d never heard it before, but I liked it, and so I basically never moved off of local Top 40 station Z-104, WNVZ-FM out of Norfolk / Newport News, VA. (I became too cool for Top 40 around junior / senior year in high school and switched to a Classic Rock station, long after that LXI system had died.) 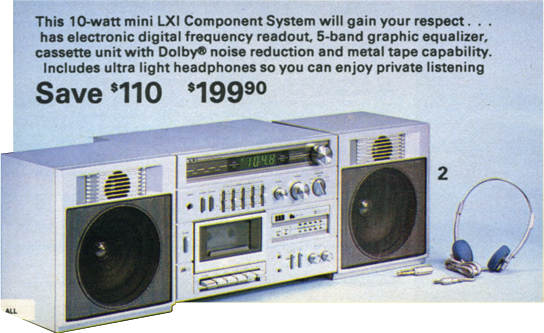 At any rate, the Pioneer CD player plugged into it nicely and I began enjoying the novelty and fidelity of compact disc audio. Back then, when the CD was a relatively new thing, each album was marked with a three letter code that told you a bit about the audio quality of the disc in question. Back then, most albums were marked AAD, meaning they were recorded with analog equipment, mixed with analog equipment, and digitally mastered. The rare find was the DDD album — “pure digital.” The first pure digital disc I had was Dire Straits’ CD-targetted album Brothers In Arms, one of the first DDD discs ever released. I have to say, even on that somewhat meager stereo system, it sounded phenomenal.

In addition to CDs, cassettes, and radio, I also listened to the extraordinary audio output of my Amiga 1000 through that system, as well as the 6-voice PSG output of the Mockingboard in my Apple IIe system. I certainly loved that little setup. A kid’s first stereo, back in the days before wall-mounted wide-screens and pocket communicators capable of streaming human history’s entire catalog of music into your earphones, was a pretty big deal.

It took some real searching to find a proper photo of the Sears LXI system. I finally found it in a scan of a 1982 Sears Christmas catalog, and it appears here courtesy of Flickr user Wishbook.