Posted on September 7, 2015 by Blake Patterson 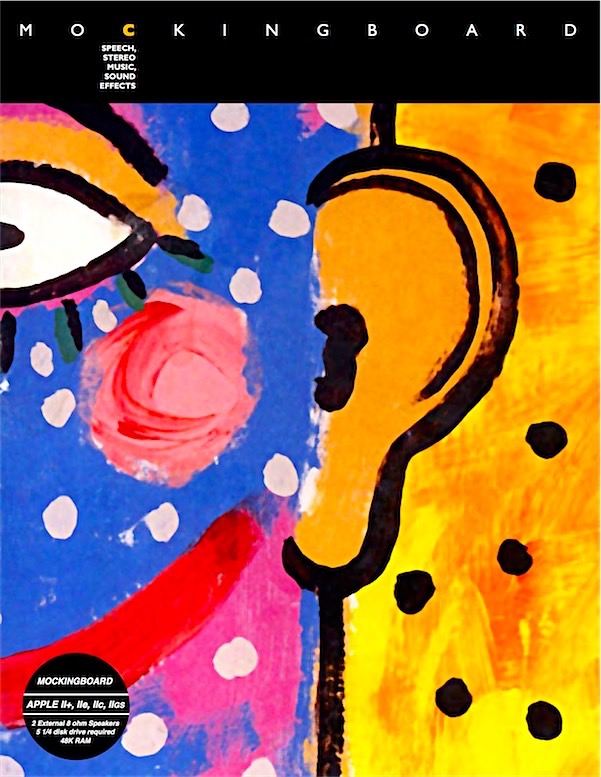 I remember feeling that one of the coolest things about my Apple IIe setup back in 1986 was the 6-voice sound card with which I outfitted it. The Apple II line (aside from the IIGS with it’s superb Ensoniq DOC audio chip) featured only a simple, 1-bit beeper which provided rather basic sound effects for games and did not allow for any sort of in-game score; a true theme song track, quality aside, would take too much CPU time. And, while there were a number of speech synthesizer cards available for the system at the time, few offered musical capabilities. Of those that did, Sweet Micro Systems’ Mockingboard was the king.

The Mockingboard was available in several configurations. The base unit, the Mockingboard A, was a card that featured two General Instruments AY-3-8910 audio chips, each offering three FM voices along with one white-noise generator. This chip, or nearly identical variations, was widely used in computers of the ’80s such as the MSX machines, Atari ST, ZX Spectrum 128, BBC Micro, Intellivision, Colecovision, and IBM PCjr. It provided decent simple waveform music and could be hacked to deliver low-quality digital sound samples. The board I owned was a Mockingboard C, featuring the two AYs as well as a Votrax SSI-263 speech chip.

Electronic Arts’ Music Construction Set by Will Harvey supports several sound cards, including the Mockingboard, and was a lot of fun to play with at a time where beeps, buzzes, and clicks were the stuff of most computer “music.” A handful of games and other programs [ info PDF ] support the card as well. I’ve personally enjoyed enhanced sound in: Lady Tut, Skyfox, Adventure Construction Set, Pitfall II, Night Flight, Apple Cider Spider, and Ultimas III, IV, and V (which supports dual Mockingboards for 12-voice sound).

After (re)acquiring an Apple IIe setup a few years back, I began searching for a Mockingboard to slot in, but was having no luck when I ran across what has become colloquially known as a Mockingboard K — a Korean-made clone board. So, I grabbed one from eBay and began to relive some nice memories. What I didn’t expect was that the Mockingboard’s killer app would come in 2015.

Apple II scenedemo coders French Touch [ English translation ] have recently released a disk, for the 128K Apple IIe equipped with a Mockingboard, entitled (NOT SO) Cheap Tunes (a play on the term “chiptunes“). It contains a selection of notable Atari ST game and scenedemo tracks, in a massaged file format, composed for the ST’s Yamaha YM2149F sound chip, a variant of the GI AY-3-8910. Along with these tracks is a player app that utilizes the Mockingboard’s two sound chips to play the bundled ST tracks in a sort of pseudo-stereo achieved by alternating sound chips with every screen refresh during playback. And the results sound impressive — significantly better than the tracks playing back on a native, monophonic Atari ST. (My Apple IIe and Atari 520ST happen to share the same desk in the Byte Cellar.)

The French Touch player was written from scratch, but the idea came from earlier work by Jason Kelk of the demo group Cosine (the code of which was not made public). I have to say, this is one of the most impressive things I’ve ever seen on the 8-bit Apple II. It’s one thing hear the Mockingboard play “Turkey in the Straw” off the 1984 Music Construction Set disk, but to hear celebrated chiptunes from one of the big systems of the 16-bit era coming out of a 1MHz Apple IIe is quite another.

Just a few more Mockingboard details to round out the post. A version of the Mockingboard, the Mockingboard D, was made for the Apple //c in 1984. It is an external device that plugs into one of the //c’s serial ports and is not compatible with its slot-based siblings, though it sports basically the same hardware. (The //c’s other external soundbox was the Street Electronics Cricket! based on basically the same hardware as the Mockingboard D — I had one one my //c in 1984 and recently acquired another one, but that’s another story…) A PC version was also made, but only distributed with Bank Street Music Writer for DOS. Third-party peripheral manufacturer Applied Engineering made a Mockingboard-compatible sound card 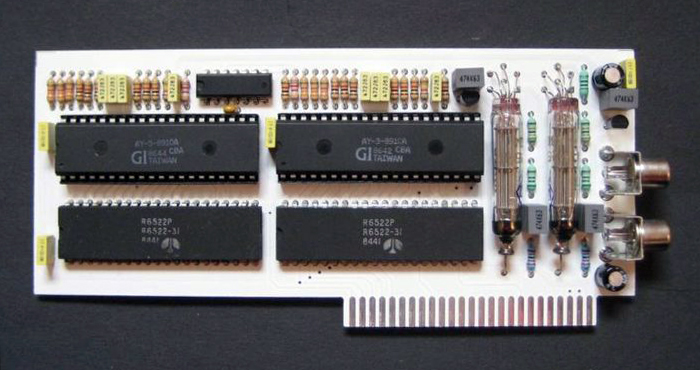 called the Phasor, which featured four AY-3-8910 chips for 12-voices total, but it saw little native support. Surely the most unusual device that could be called a Mockingboard is a clone out of Bulgaria featuring a dual-vacuum tube pre-amp, all on a snow-white circuitboard!

Several Apple II emulators feature Mockingboard emulation, but anyone with a slotted Apple II wanting a Mockingboard of their own should keep an eye on ReactiveMicro, who have made two different versions of clone boards. And, of course, there’s always a chance one will pop up on eBay.

8 Responses to The Mockingboard Sings a Few New Songs