How I Got Started in Vintage Computing 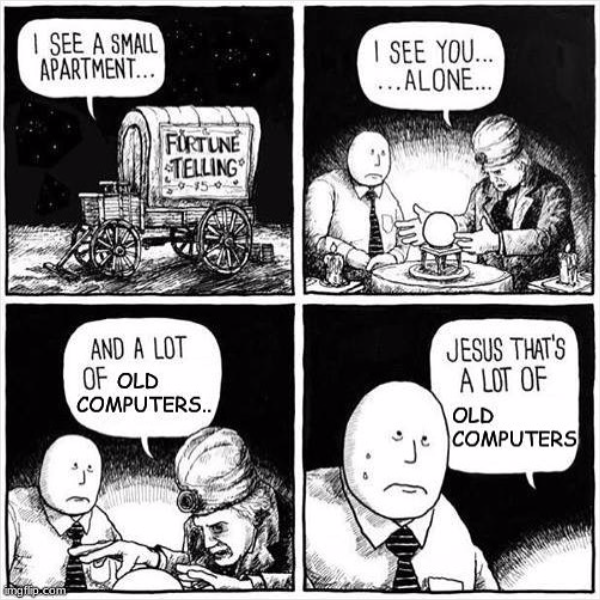 I was recently listening to the celebratory 200th episode of my favorite vintage computing podcast, the Retro Computing Roundtable, which has been running for nine years. Marking the occasion, the early hosts of the show were in attendance and much reminiscence did ensue. Among the things discussed was the topic of how everyone’s relationship with the retro computing endeavor had changed over the past decade. In the discussion, the hosts touched on how it is that they got started in the hobby, and when. I’ve never really written specifically about that on this blog, as far as my own history, but the RCR folks have inspired me to do so presently.

Looking back, while I had an Atari VCS since 1979 or 80, I received my first proper computer on Christmas day, 1982: a TI-99/4A “home computer.” I expanded the system and enjoyed it well, but the platform wasn’t doing so hot around that time, so after a while, I sold it and moved to an Apple //c. It was great, and I really loved that machine, but I spent more and more time with the Macintosh at the local computer dealer and 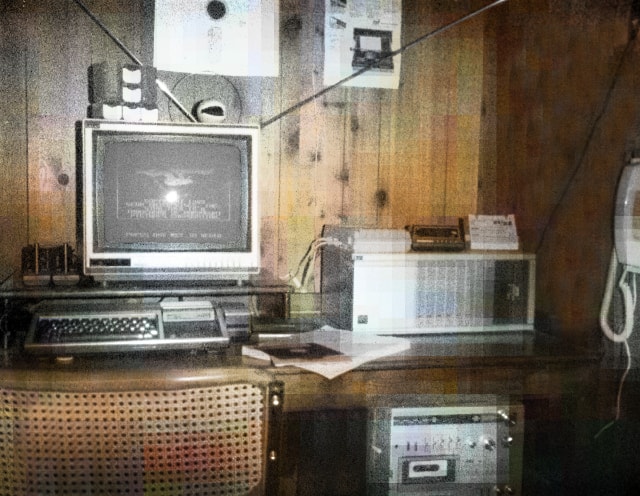 reading MacWorld magazines, so I eventually sold the //c and got a Macintosh 128K. When I went to a (different) store to buy some floppies for it, I encountered a Commodore Amiga in person for the first time. Blown away, I turned right around, returned the Mac after only a week, and got the Amiga 1000. And, so it would continue, on and on, one machine sold for the next, for quite a few years. It wasn’t until 1999, though, that I began “doubling up” and acquiring what I would call “vintage computers.”

At the time, I had been recalling some of the fun I had with my original Apple IIgs back in 1988 or so. One day I looked around eBay and found a few clean, complete systems. I bid and won one. Setting it up and running old programs on it turned out to be a whole lot of fun. I was quite glad I had gone ahead and acquired one of my favorite machines from days gone by (and so, it began…). It was around that time that I read online that there was a guy working out of a storage unit in nearby Frederick, MD, selling refurbished NeXT machines. I called him up to inquire, it sounded like a good proposition, 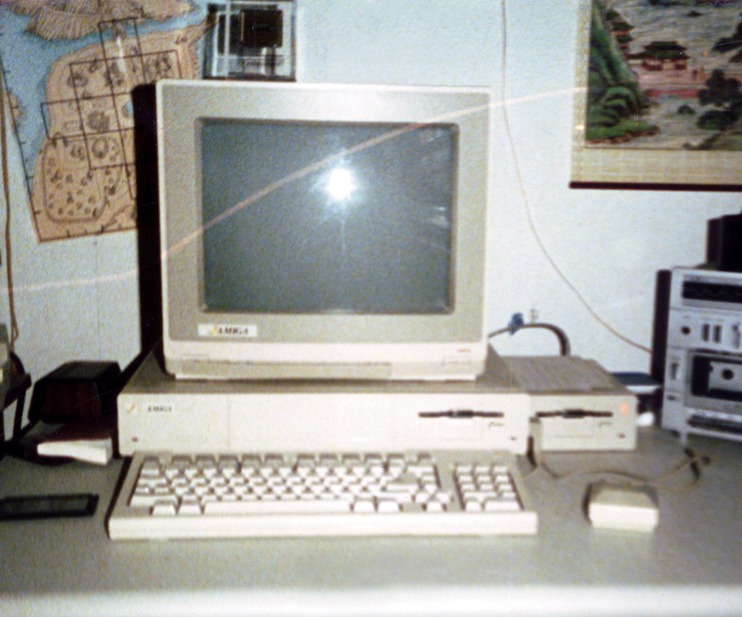 so I drove up from my Arlington office on my lunch break and picked up a NeXTstation Turbo Color system including a 21-inch NeXT color display and a CD-ROM drive, all for $250. (I well recall that carrying that massive CRT up the tiny spiral staircase to the computer room in our first Northern Virginia home almost did me in.) And that’s when I decided it would be nice to have an Amiga again…

So, that’s how I got started. I am currently limited by space (the “Byte Cellar” is full) and, sadly, have had to put two or three systems on the shelf to make room for others (when a particularly good acquisition opportunity or two arose). I am not a collector that gets any particular fulfillment from owning machines that are shelved and not setup to use, which apparently puts me in one of the two different camps of collectors. I know collectors who amass many of the same machine to have, but not to use. And, there’s nothing wrong with that in my book, it just doesn’t seem much fun to me; I’ve no desire for two Apple IIes or three Atari 800XLs.

That’s not to say my shelves are bare. In support of these systems I do, of course, have other things on the shelves, such as spare parts, broken computers I’ve not been able to make myself throw away, and many period magazines and books related to the systems I own. And there are large bins of cables. And piles of RAM chips. A wall of interface cards. And so on. I did make the decision some years ago to let the boxes go. They are spacious units that enclose air, and I had to draw a line, so no more boxes are kept except for the rarest of items.

Photo of the bulk of the collection (about half of the “Byte Cellar” room) taken back in 2012, which is a fairly close representation of its current state. Click the image for a full panorama with items labelled.

Most of the systems in my collection are systems that I owned at some point in the past and for which I have fond memories. There were certainly systems in the past that I badly wanted but which were far out of reach for me due to their price. Even though I have no nostalgia for using such machines (as I never owned them), it has been fun acquiring a few of them for small fractions of their original price and spending time using them and learning their unique ecosystems, anew. 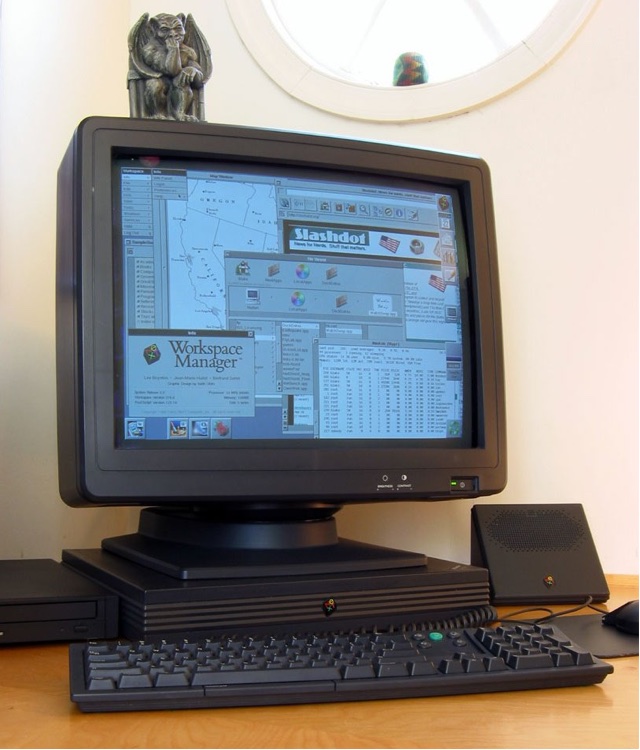 One example of these from my collection is the aforementioned NeXTstation Turbo Color, which originally retailed for $7,995 for the computer alone. I remember going in Waldenbooks or B. Dalton book store whenever I ended up at the mall and thumbing through Bruce Webster’s The NeXT Book, reading about the NeXT system and looking at the black and white rendering of the extremely sexy NEXTSTEP user interface. (Even that book about the NeXT was too expensive to buy, back then, though I’ve since secured a copy for my shelves.) I lusted after the NeXT machines, buy couldn’t possibly have owned one in their day. But now, I’ve become completely familiar with the system and am always glad to have a reason to fire up that NeXTstation (or the HP-9000 712/100 “Gecko” that runs NEXTSTEP on a RISC platform). Other examples are the Apple Lisa 2, originally $4,720, and the SGI O2, which cost around $17,000 retail. It has been great to have the opportunity to get to know these systems, even if it’s decades after their hay day.

So that’s it, in a nutshell. Over the years, The List of systems I’ve owned has gotten frighteningly long. But presently, with the host of new and wonderful assistive hardware that’s appeared on the scene to make using these vintage systems easier and more enjoyable, I’ve been expanding what I have and don’t really see the collection growing very much, as far as the addition of new, complete systems. But, the addition of floppy and hard disk emulators, such as the CFFA3000 in my Apple IIe, the HxC2001 on my Amiga 2000 and Atari 520ST, the TIPIPeb in my TI-99/4A, and the SCSI2SD in my Amiga 2000, have really made using these systems a treat. And, I hope that this blog post might inspire someone out there to grab a system from their youth and start taking that pleasant step back in time that I and my ilk so enjoy on a regular basis.

3 Responses to How I Got Started in Vintage Computing