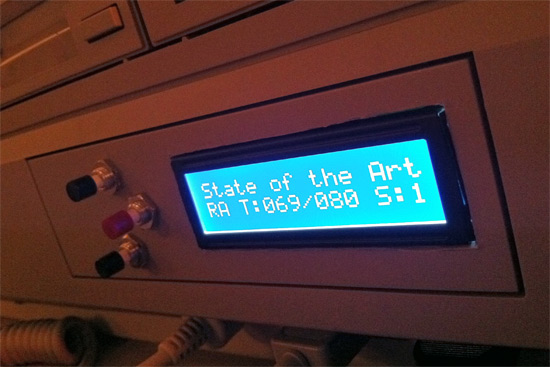 One of the problems (and hassles) of playing with certain vintage computers today is their dependence on floppy disk media.

While floppies manufactured way back when keep their bits together far longer than you might think — around 95% of my Apple II 5.25-inch floppies from the late ’80s are fully readable — time does take its toll. “New” double density 5.25- and 3.5-inch floppies are basically impossible to source, though random sacks of used floppies are pretty easy to find on eBay. But, even so and despite the charm of occasionally sliding a floppy into a drive, we’ve all long ago gotten used to launching apps from a fixed disk, making the floppy shuffle a bit of a hassle. 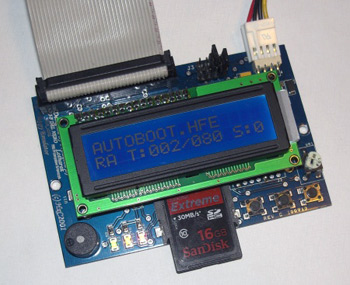 Happily, some nice solutions to the retro computing fan’s floppy disk problems have started emerging in the last few years, thanks to the numerous, easy to work with microcontroller kits that have become available. I’ve seen microcontroller-based floppy emulators that serve up disk images from flash storage arrive for many of the beloved platforms of old.

The most flexible of these I’ve seen is the SDCard HxC Floppy Emulator. This device works with any system utilizing a Shugart / IBM PC floppy interface and, as such, sports an impressive list of compatible systems, including:

I ordered one from Lotharek in Poland (for around $110) and a few days later it arrived here in the states. 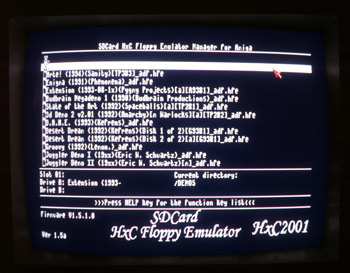 The SDCard HxC Floppy Emulator comes with an attached 2-line, backlit LCD display which is used, in conjunction with three control buttons, to browse the disk images on the inserted SD card and select titles for mounting. Disk selection on the system I bought the unit for, my Amiga 2000, is made even easier thanks to a downloadable Amiga disk image that loads a disk selection program on the Amiga, giving a much clearer view of the available images.

Despite the Amiga loader program, I still wanted to keep the unit’s LCD and control buttons in easy reach, so I used drill and Dremel to install the (detachable) LCD and a set of external buttons in my Amiga’s unused 5.25″ drive bay faceplate.

The results are pretty nice, I think. 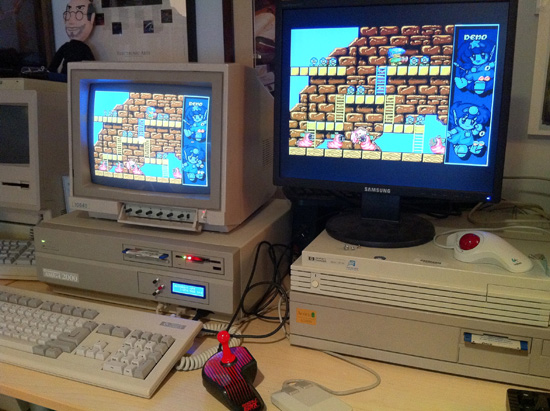 I’ve had great fun with the newly enhanced system so far, but I’ve still got to site down and fully populate the SD card with hundreds of games and demos. I do wish the Amiga disk image loader program featured a PAL / NTSC softswitch, as my Fat Agnes can’t take a physical switch at J102. And next I definitely need a floppy emulator for my Apple IIs, several of which are happily in the works right now. (More on that when there’s more to tell.)

A tip of the hat goes to Andy Taylor and his Retro Computers blog. It was a post of his in late March that put the HxC 2001 on my radar.