A Little App Called ‘FlyLab’ Running on My NeXTstation

Last week was Back To School Week at r/Retrobattlestations. The challenge was to photograph your vintage computer running an educational program of some sort. For this one, a rather obscure little app that I ran across when first loading up the NeXTstation that I acquired in 2000 came to mind. FlyLab by Robert Desharnais of California State University, Los Angeles. It is a genetics application that visually conveys inheritance through mating pairs of flies with configurable traits, sort of a fly construction set. The app really stood out for me because it is an ideal demonstration of what NEXTSTEP could bring to education, and its interface a model of the strengths of the NeXT Interface Builder development tool. 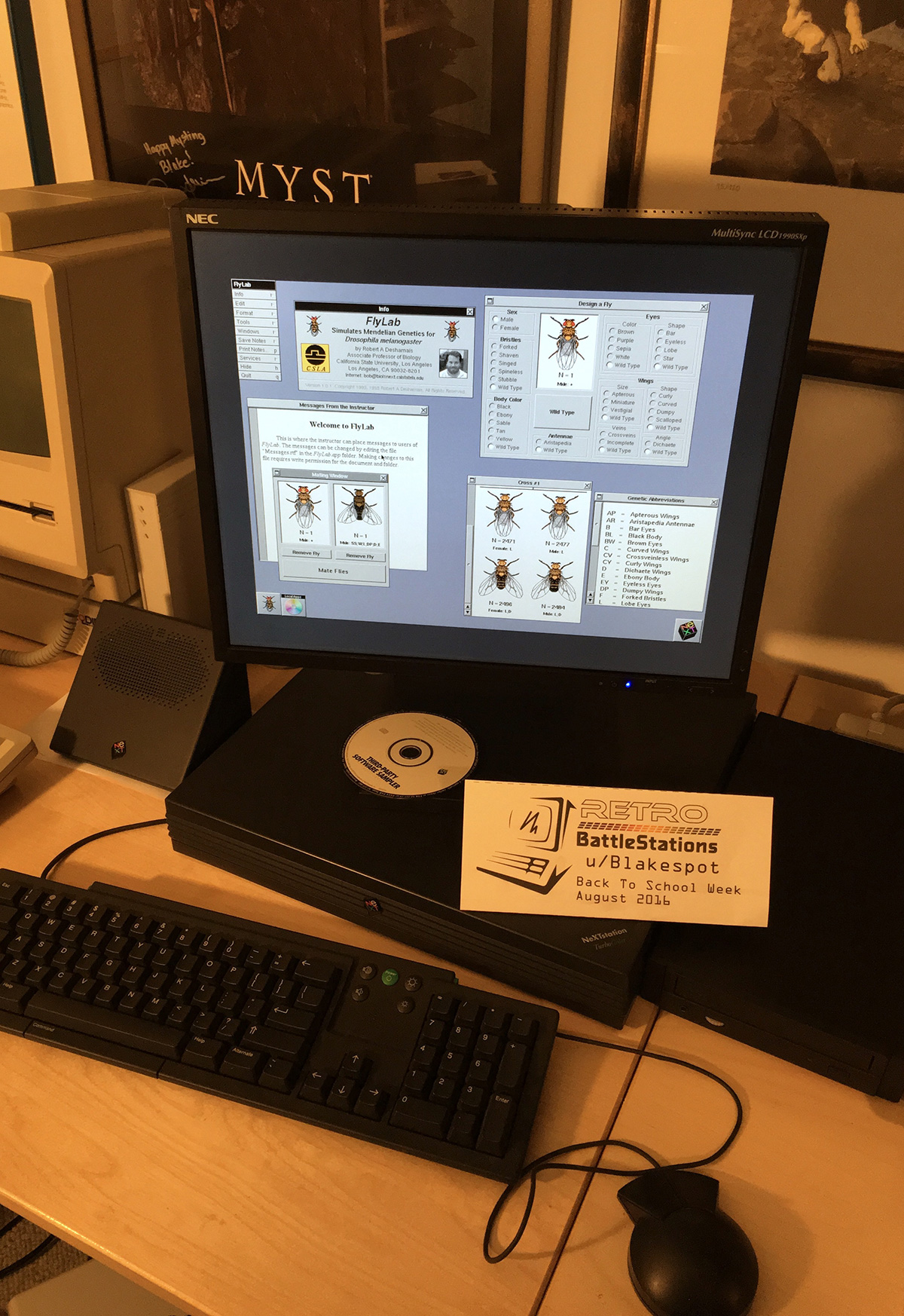 Desharnais and Melvin Limpson of the American Physiological Society developed a variety of NEXTSTEP applications as part of CSU’s Virtual Courseware Project, funded by CSU as well as major grants from the National Science Foundation (NSF).

In response to an email I sent at the time of my Back To School Week submission, Desharnais shared a bit of history surrounding FlyLab. A portion of his email follows.

FlyLab on NeXTSTEP was my first major app written for that platform. I did create a few more NeXTSTEP educational apps before NeXT went under. I love your NeXTstation! Brings back fond memories.

FYI, FlyLab begat a number of progeny. It’s son, Virtual FlyLab was a web-based server-script that went online in July 1995 and was very popular. In 2001 Virtual FlyLab begat a Java version called FlyLab that was part of a commercial product (Biology Labs OnLine) marketed by Pearson Ed, but is now available on our servers for free. Then came the great-grandchild called Drosophila, also free, which was developed using Flash and has lots more bells and whistles. Drosophila is currently being used in lots of colleges and high schools. The app bred like, well, fruit files.

It’s nice to hear the backstory of this little app that stood out to me way back when. I have searched online and cannot find an FTP archive hosting FlyLab, but will dig through my NeXTstation’s filesystem and try to find the original archive I downloaded (sixteen years ago…) to post shortly. It does little to bolster my personal illusion of youth to realize that my early retrocomputing endeavors are, themselves, becoming retro.

UPDATE (8/28/2016): I have tarballed FlyLab.app (v1.0.1) on my NeXTstation and placed it online for anyone interested in playing around with it on their NeXT workstation or perhaps under Previous, the NeXT emulator. (I do not believe it is a Multi-Architecture Binary able to run under NEXTSTEP for PA-RISC, SPARC, or x86.)

This entry was posted in NeXT, r/Retrobattlestations, UNIX and tagged application, education, NeXT, university. Bookmark the permalink.