My “Portable Week” Offering to /r/RetroBattlestations

Another week, another competition over at Reddit’s /r/RetroBattlestations. This week was Portable Week. The challenge was on the easy side this time around: display a message of greeting to the subreddit on the screen of a portable retro battlestation. Now, while iOS devices have been pretty much the extent of my mobile dealings over the past six years, I got pretty deep into mobile devices back in the late ’90s, and even then, many of those I went for were retro units grabbed from eBay — some of my first purchases on the lord of auction sites, in fact. 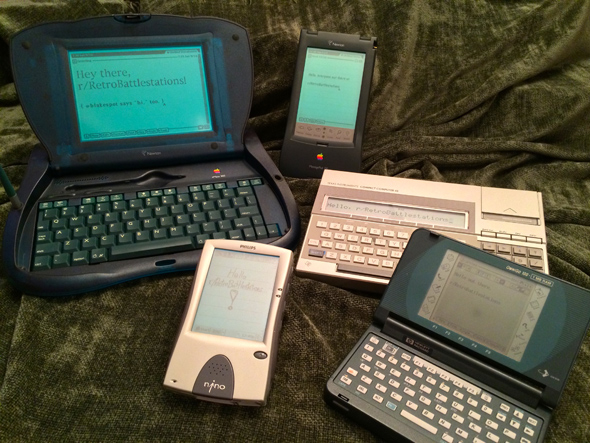 So, going into this challenge, I had a few devices to choose from, and I think I put together a nicely varied little set to send greetings /r/RetroBattelstations’ way. Clockwise from top right, the devices shown are: Apple eMate 300, Apple Newton MessagePad 130, Texas Instruments Compact Computer 40 (CC40) with its notable Hexbus interface, HP OmniGo 100 (80186-based, interestingly), and a Philips Nino 300.

So, there you have it.

This entry was posted in Handhelds, r/Retrobattlestations. Bookmark the permalink.

2 Responses to My “Portable Week” Offering to /r/RetroBattlestations