A few weeks back I wrote a post detailing my desire to build a 486-class DOS box. In the time since then, I’ve been actively digging parts out of my storage shelves and scanning eBay for the remaining, needed items. 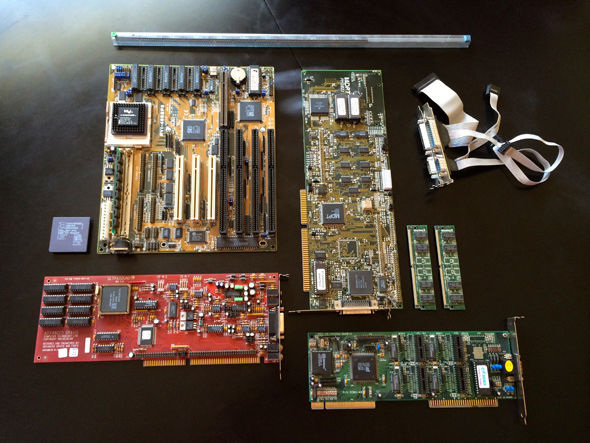 I though I’d post a list of parts for this build, and where I am on each right now, given that things are getting pretty close to go time.

Ordered, on the way:

Now, as I mentioned in my earlier post, I am basically trying to build a replica of the PC I had in 1996. It started out as a 486DX2 66 in 1994 and was upgraded over the next two years. Because of my rather particular hardware requirements, this project has taken on a cost well beyond what I had initially envisioned. I think I’ve spent close to $500 so far, though the original 486DX2 66 I procured to run NeXTSTEP for Intel in 1994 cost a full $4,500 (= student loan).

The purpose of this machine is to have an (ideal) vehicle upon which to enjoy mid-90’s era DOS demoscene productions, MOD/S3M/XM audio tracks, and games. The system should be capable of running Windows 98SE quite well, but that’s really a secondary consideration.

I shall post another update in a week or so — that, perhaps, being a full build video. Time (and shipping progress) will tell.

READ PART 3 OF THIS PROJECT…