Posted on January 6, 2019 by Blake Patterson

As a long-time Apple II users I am quite familiar with the technique of generating color video by way of NTSC “artifact color” (also sometimes referred to as “composite color”). The 8-bit Apple II series is incapable of outputting any actual color pixels, so it takes advantage of idiosyncrasies of the NTSC composite video signal by displaying patterns of black and white pixels which are smeared together on-screen in a predictable fashion, resulting in colors that are not actually in the signal. 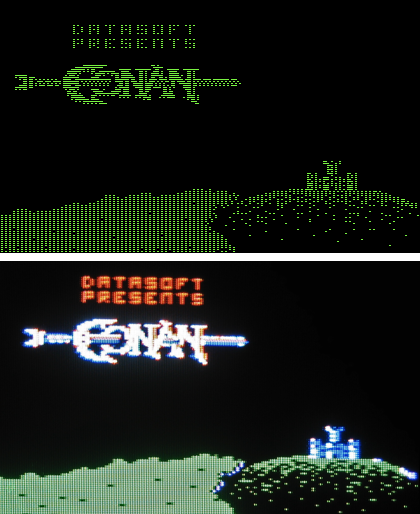 I’ve spent thousands of hours staring at the artifact colors of an Apple II display, but lately I’ve been exploring something that’s rather new to me: the world of IBM CGA (for Color Graphics Adapter) artifact colors.

I recently got turned on to the notion of putting together a little Tandy 1000HX system, so I looked around and over the Christmas holiday I found one for a very reasonable price on Craigslist, brought it home, and made a space for it in the Byte Cellar. It’s a lovely little machine with a lot of personality and it’s been fun putting through its paces. (I am about to install a variety of expansions to greatly increase its capabilities, and that will be the subject of a blog post to come.) Being a Tandy 1000, it features the enhanced graphics and sound capabilities that IBM introduced with the PCjr, and that puts it well beyond standard CGA as far as on-screen visuals for programs that support its enhanced video modes.

Back in the DOS days I was never much of a PC guy. I briefly drove a Tandy 1000TL in the late ’80s and, later, had the BridgeBoard A2088 PC-on-a-card in my Amiga 2000, so I was able to find a few old DOS floppies tucked away on the shelves. I’ve been firing these up on the HX and very few of what I have here support the PCjr/Tandy video modes and, so, I am reminded just how much I dislike standard CGA graphics. The typical palettes of cyan, magenta, white, black and red, green, yellow, black I have always found to be far less appealing than the Apple II’s 6-color hi-res (artifacted) palette.

Well, one of the games I had on floppy was Archon from Electronic Arts. I loaded it up and there was much cyan and magenta to be had on the RGB display, and things looked pretty busy with lots of pixel patterns making up dithered colors. Looking at the patterns, I recalled reading somewhere that it was a CGA game which utilized artifact color and that was written to be presentable both on an RGB monitor as well as via composite output. It occurred to me that the Tandy has a composite output, and the system was sitting next to my gaming TV which accepts composite, so I wired them up. I powered on the TV and, voila! I got my first taste of CGA artifact colors — and just how much better they looked than plain old RGB CGA!

After that, I began seeking out DOS games that support artifact colors via composite. There seem to be two approaches to such games: those that deliver one set of visuals that looks presentable on an RGB display while achieving the extra colors through composite and those that have two separate sets of visuals and asks the user how the video is configured before rendering one or the other. The effectiveness of artifact colors to improve a game’s appearance varies from title to title, but there are some really impressive examples out there.

Above, you can see a particularly impressive improvement that artifact color brings to a CGA title. On the left is the standard CGA version of EA’s Hard Hat Mack, and on the right is the same version with a patch applied (written by VileR (see the README.TXT)) that converts the game to a full 16 artifact colors, making it the most colorful version of Hard Hat Mack out there. Have a closer look at the patched version in action.

It’s interesting to note that, while the Apple II uses a monochrome signal to generate artifact colors, CGA is capable of outputting actual color pixels, and so it is able to generate a wider array of artifact colors depending upon the combinations of actual colors used in the pixel patterning (as well as the screen resolution of 320×200 or 640×200). A post over at the excellent blog, Nerdly Pleasures, lists the DOS games that support artifact color and goes into great detail about the results of various color and screen resolution combinations. It’s also worth noting that several other systems from the home computer days utilize color artifacting, at least at times, including the Tandy Color Computer and the Atari 8-bit line.

And, finally, this post would not be complete without mention of perhaps the most impressive example of IBM PC CGA artifact color out there, the 2015 DOS scenedemo, 8088 MPH by Hornet, CRTC, & Desire, which uses a number of previously unused techniques to achieve 1024 colors via NTSC artifacting on a 4.77MHz 8088-based IBM PC with IBM CGA adapter hardware. It is an extremely impressive piece of work, and a fascinating blog post by Trixter details the approaches used in the demo’s various sections.

Thanks to @ne1for23 for pointing me to the Hard Hat Mack patch as a great example of artifact color!

3 Responses to My First Taste of CGA “Composite Color”