Posted on October 3, 2017 by Blake Patterson 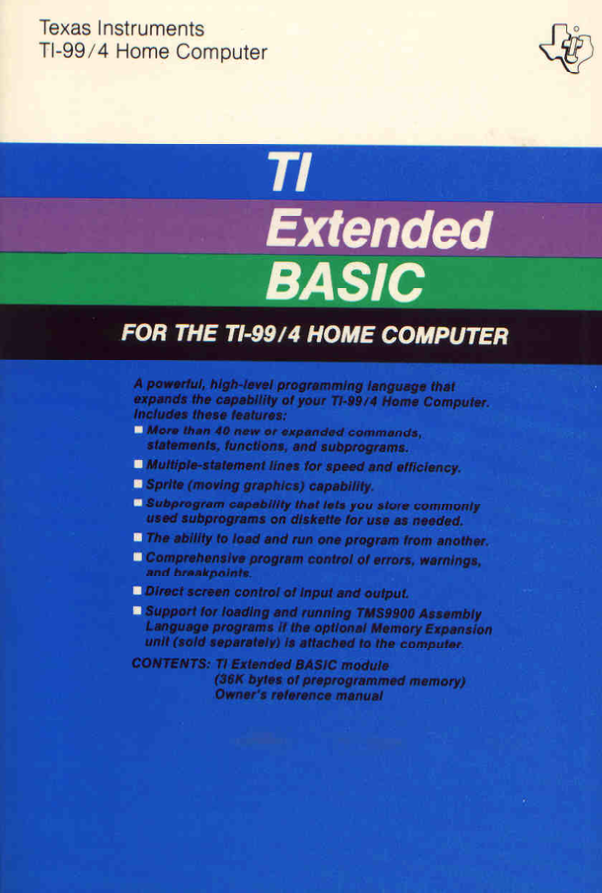 July was BASIC Month over at r/Retrobattlestations and for that competition I decided to reach for my TI-99/4A and type in a TI Extended BASIC game called Pearl Harbor from the 1983 issue of Electronic Fun with Computers & Games…for the second time in 35 years.

In a post I made several years ago, I talk about a particular issue of Electronic Fun with Computers & Games magazine that I purchased in order to get at the Electronic Arts “Software Artists” poster that came packed inside it. After getting the poster setup, I flipped through the issue and realized it looked quite familiar; it was the one issue of that publication that I ever purchased, all the way back in 1983. And I remember why I bought it when I saw the lengthy TI-99/4A type-in BASIC game Pearl Harbor on the back pages.

So, for BASIC Month 2017, I pulled that magazine off the shelf and started typing in the program. I must confess that I used a text editor on my AmigaOS 4 “SAMiga” to type in the code a bit more comfortably. I then connected the Raspberry Pi-based laptop I put together to my TI-99/4A‘s serial port (provided by a Myarc RS-232 card sitting in the large TI Peripheral Expansion Box tethered to the ’99) by way of a Keyspan USB-to-serial adapter and cable. After getting that set up, I launched TIMXT on the ’99 from the FlashROM 99 cartridge I recently acquired and got the machine working as a Linux terminal, and from there used ‘sx’ to send the tokenized BASIC file I generated (with Classic99 on Windows) from the BASIC code over to the ’99, which wrote it out to disk. (The terminal program TIMXT supports the 80-column text mode provided by the F18A video upgrade module that I recently installed in the machine, which is nice!) With all that done, I fired up the ’99 with TI Extended BASIC, loaded the program, and ran it.

An intense throwback to 35 years ago then commenced.

[ The BASIC file for use on a real ’99 or in an emulator: PEARLHARBOR.ZIP ]

I was playing Pearl Harbor again, and it was like being in 1983 for a few moments. I could almost hear The Kinks playing in the background. And, as it happened, I wasn’t the only one who got thrown back to the ’80s thanks to BASIC Month.

The magazine ran a little writeup and photo of the author of Pearl Harbor (who got $100 for submitting the program and being chosen for publication), a 20-year-old guy named Jerry Hunter from Arkansas. I took a video of the game running on my ’99 for the BASIC Month entry and thought about, from the author’s perspective, what a crazy, out-of-the-blue thing it would be to see someone typing in and running a BASIC program you wrote three and a half decades ago, here in 2017. Since this guy was programming at this level back in 1983, I figured there was a good chance he would have an online presence today.

So, I started searching for his name online. I found a number of matches in and around Arkansas, but I couldn’t narrow it down and I wasn’t seeing email addresses associated with the names. Adding in a clue I saw in the program listing, and after a few hours of searching over several days, I came up with a likely address match. So, I sat down and actually wrote this person a letter, put it in an envelope, included photos of the magazine and program listing, and mailed it. 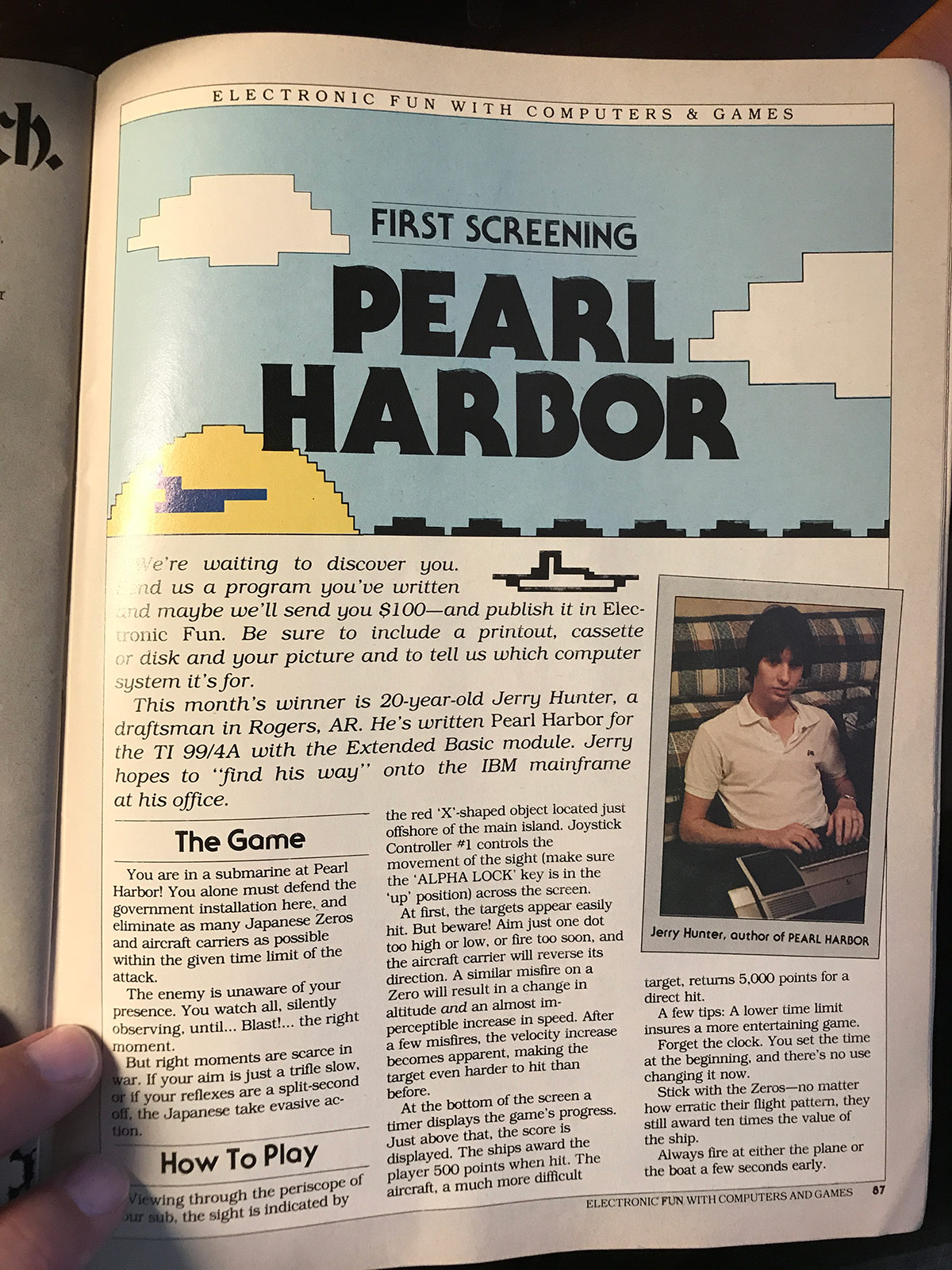 Two and a half weeks passed and I figured that was that, when I received an email entitled:

Jerry had got in touch and told me in no uncertain terms how tickled he was to have gotten my letter. He then took me through his eclectic and downright amazing 35 year career since Pearl Harbor.

As for his career, to pick a few highlights readers would enjoy, a month after Pearl Harbor was published he was hired on at Wal-Mart as their first ever non-degreed computer programmer. He bought an IBM PC to be able to program at home (poor little TI-99…). At Wal-Mart, his Telxon project led to the first large-scale deployment of barcode technology in retail and to him writing the first two FM wireless digital data transfer protocols (P-TAP and R-TAP).

Before long, I found myself at the center of a complete technology revolution. I was the first installation of the IBM PC-LAN product outside of IBM development, and tested and evaluated other networking products before choosing Novell Netware. The entire world was changing so fast, and my wireless protocols were taking the world by storm.

He met Sam Walton who got him into flying and inspired him to think big when it came to business, as did various industry giants he met through his association with Walton. He was motivated to make a huge impact, and worked towards that in his programming.

…in the evenings, I was still playing with experimental code, learning the basics of AI and flex-code, communications between machines, and countless other things. In 1984 I wrote “ThunderCode”, a 4GL code-generation product which enabled the user to draw their user interface, and it in turn wrote BASIC source code which could quickly be dropped into a business application. Also in 1984 I wrote CBSIM, a doorware (add-on product) for RBBS, which became the first multi-user chat system for public-access BBS systems. I also began writing code that functioned as a graphic terminal protocol (because I believed the BBS world deserved better than ANSI graphics).

Jerry left Wal-Mart in 1986 and over the years that followed he ran many successful businesses across a variety of areas. He currently owns the global technology firm USFleetTracking, which he started in 2005. And he recently bought an airport.

Of the technologies he developed that readers may be familiar with, DarkStar BBS, the first multimedia BBS platform, stands out.

In a world of ANSI graphics, DarkStar incorporated up to 800×600 graphics, mouse drive, and the use of BMP, PCX, GIF and JPG images, FLI/FLX video, WAV audio, supported editable menus similar to RA or QBBS (except in graphics mode). With no employees, just myself, I sold 3,200 copies of the software at prices ranging from $99 at first, eventually reaching $249.

Given the course of his storied career, I really think that Jerry needs to write a book.

I hope readers have enjoyed this somewhat unusual post. I’ve certainly enjoyed the events that lead up to writing it. BASIC Week at r/Retrobattlestations along with a 35 year old computer magazine brought me a rather fascinating glimpse at the career of an individual who has made a real technological impact — and several, at that.