Did You Hear About That Nutter Who Dropped $6K on No Man’s Sky?! [Updated!] 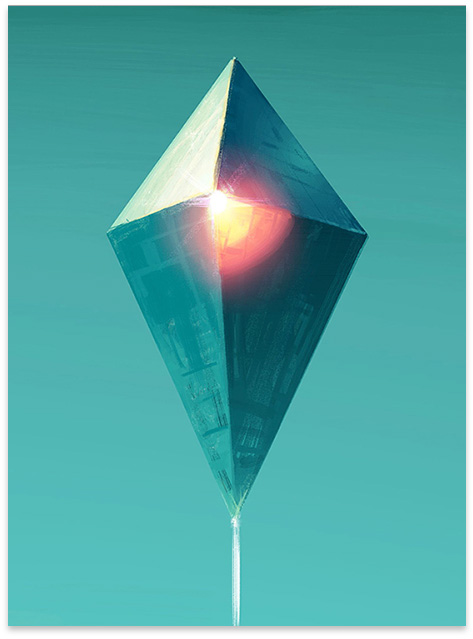 People who know me both online and IRL know that I’m a pretty big fan of Hello Games’ No Man’s Sky.

Actually, that’s something of an understatement.

I’m about 330 hours in so far (405 planets across 128 systems). I’ve been rather prolific on Twitter, sharing experiences and evangelizing the game (out of a sense that unhappy players don’t quite “get” it), I’ve been a denizen of the related Reddit subs since Launch Day (9 August, 2016) and have gained some note there, and I’ve made several posts about No Man’s Sky here since launch: A Few Words About the Best Game I’ve Ever Played: No Man’s Sky, My Skylake Gaming PC Build, Procedural Planetary Exploration Across the Decades. My wife and my 10 year-old daughter are pretty tired of hearing NMS anecdotes, I’m quite sure.

In a nutshell, it started out like this. I first heard of No Man’s Sky in the summer of 2015. The previews looked pretty amazing and, as I had a PS4, I was excited for its release. Not long after, I grabbed Elite:Dangerous, which I had been following with interest for some time, when it landed on the Mac (I wasn’t a PC guy…at the time), and was amazed by its realism. Comparatively, my impression of NMS at that point was that it would be less of a “whole scope” universe simulation than E:D; it seemed from previews that NMS wouldn’t be presenting an “I can fly from point A to point B across the galaxy without ever breaking frame” environment and I wondered if that would make for a much “smaller” experience. Months passed and I was spending time in E:D, mining, fighting, but became frustrated because the difficulty of amassing assets in order to upgrade ships was, to me, a huge barrier and I eventually lost a good deal of interest. I wasn’t having much fun and as a result I pretty much stopped playing.

Months more passed and No Man’s Sky was released. I purchased a digital download of the game for PS4 on day one and began playing. I fell in love immediately. 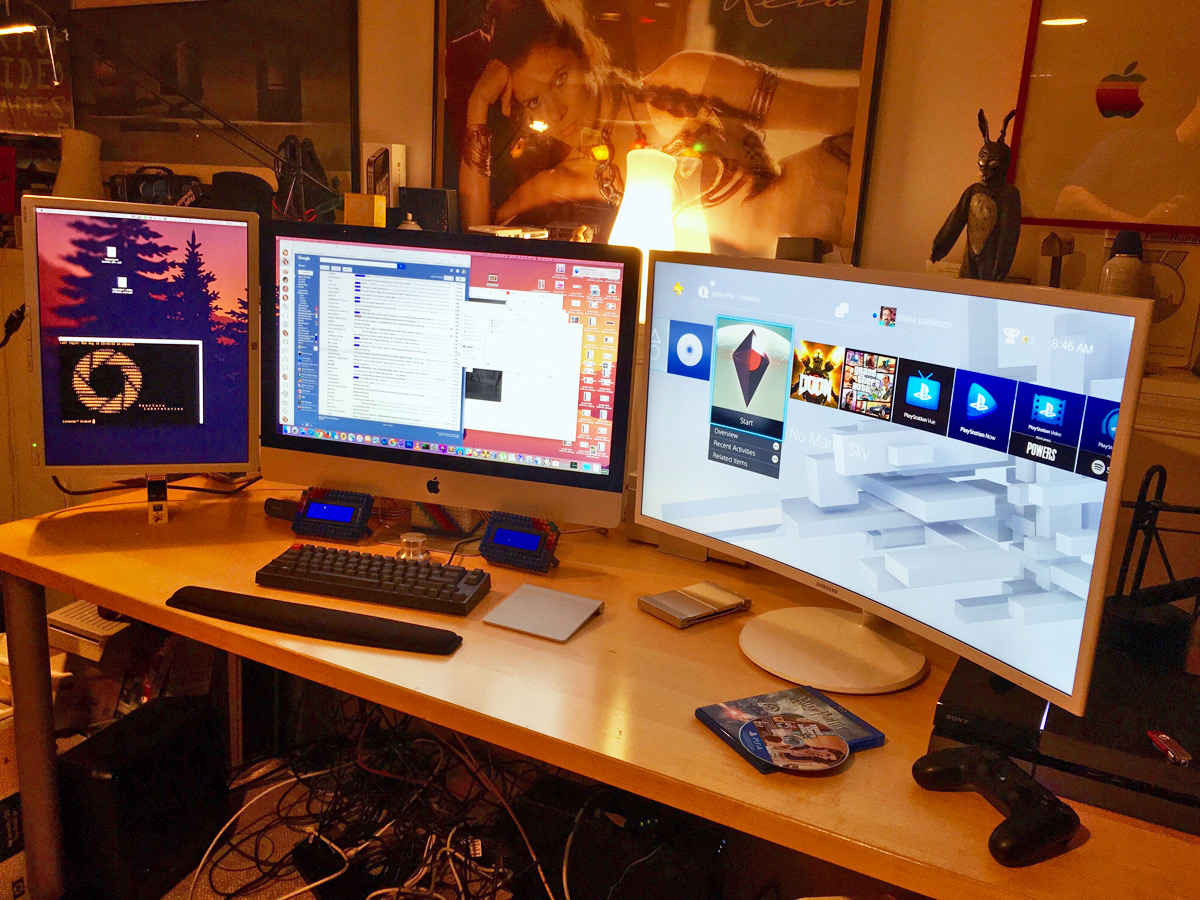 I recall waking up on my genesis planet and walking about the lush alien landscape in a sort of wonder. I had to make an extremely long trek in order to find the elements needed to repair my initial ship so that I could venture onward. Along the way, walking through the trees, boosting up cliff faces with my jetpack, gazing at planets hovering on the horizon, running around with the various creatures skittering about the landscape, I experience a feeling of incredible immersion and the scale of the thing reality sunk in. I could explore every inch of this massive planet if I wished. And there are over 18 quintillion planets in No Man’s Sky‘s procedurally-generated universe. My earlier concerns about NMS feeling “smaller” than Elite:Dangerous were certainly for nought. 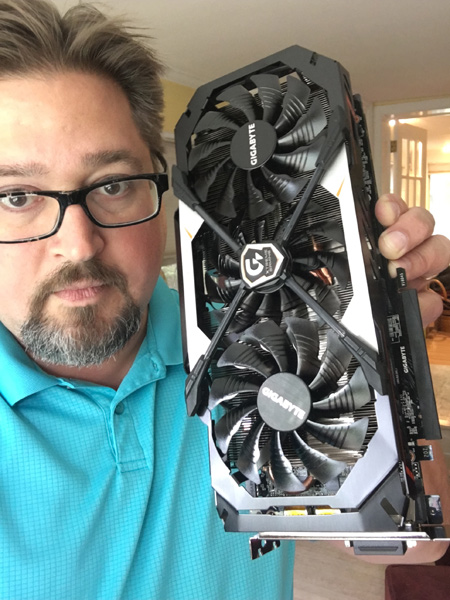 The PS4 I played with was in my den entertainment center with a few other consoles, tied to the wall-mounted screen. After just a few days in, I wanted to get as deep into the experience as I could, so I pulled one of my Mac’s displays off the desk to clear a space in the basement computer room, bought a 32-inch curved 1920×1080 display, and plopped it and the PS4 down next to the Mac and started playing. This turned out to be a great move — so much nicer than playing from the couch across the room. I ran like this for a couple of weeks, getting up well before dawn to get some time in before heading to the office most days, and it was awesome. So awesome, in fact, that I wanted to take things farther, to get all that I could out of the game. I decided to build a high-end gaming PC specifically to play No Man’s Sky. 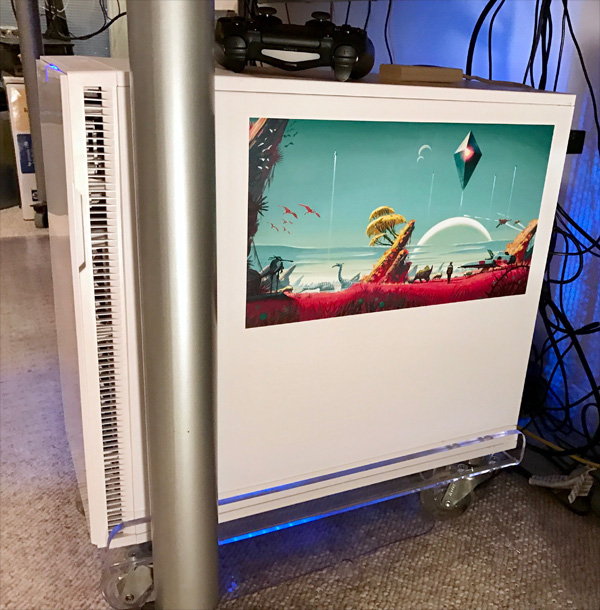 What I was after was a locked 60fps (or greater) framerate, adjustable field of view (PS4 version is locked at 75°), the potential for a higher resolution display, and the option of using Mods. While I’ve built a good number of PCs for myself and friends over the years, it had actually been a long 18 years since I’d done it last. (I switched to Mac in ’99 after Jobs’ return to Apple.) So, I spent a few days learning what I needed to know about the latest PC hardware and got to work.

Once the parts arrived, I spent a Saturday building a Skylake Core i7-6700K PC around an ASUS Z170-Pro board, with a factory overclocked Nvidia GTX 1080 graphics card, SSDs, and 16GB of RAM. After chasing my daughter off the thing, I replaced the PS4 on the desk with the new PC, loaded up Steam, bought No Man’s Sky (again), and started anew. 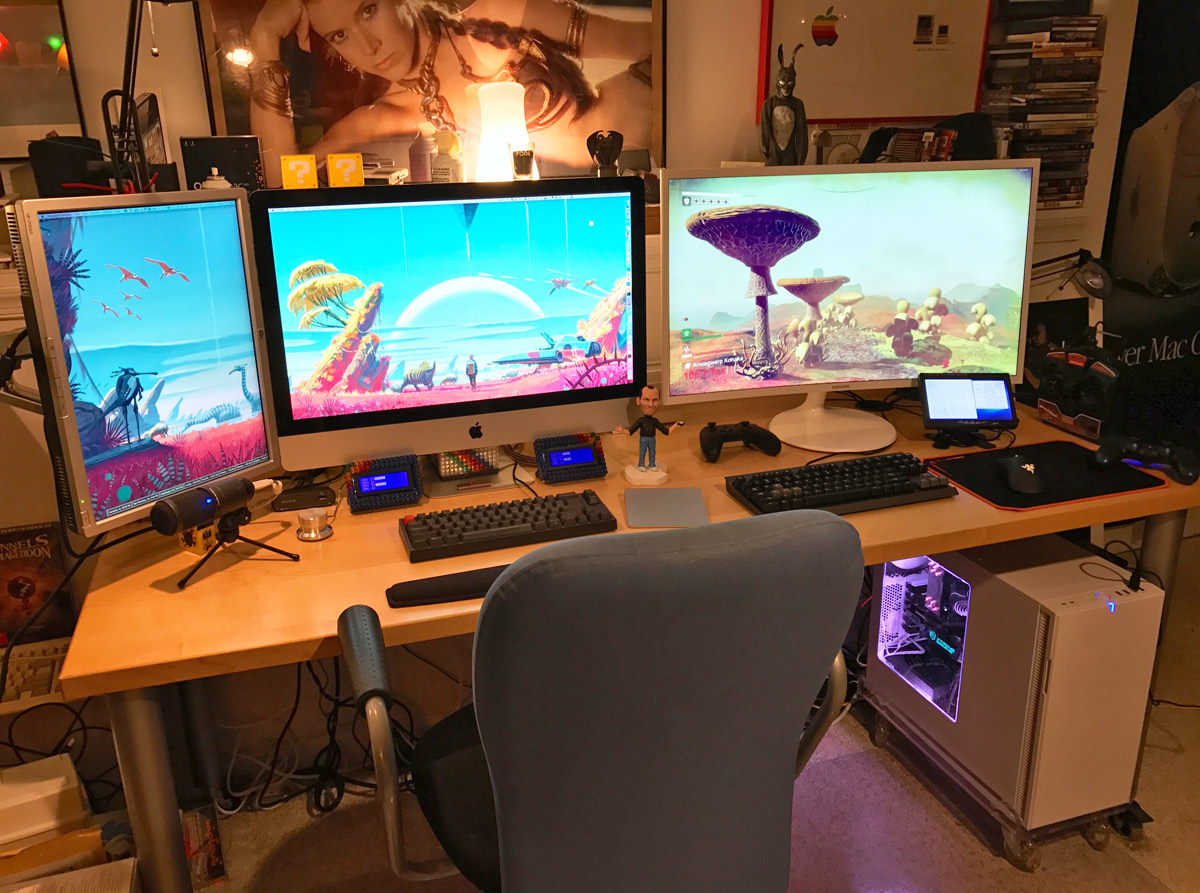 Going from 30fps to a locked 60fps was huge, as was a 95 degree field of view. I spent much of my free time playing NMS as the months passed, liking it more and more.  And, being enthusiastic, I began picking up related toys along the way — t-shirts, stickers, posters, and the Explorer’s Edition box set (third time purchasing the game). Just a few weeks ago I took the big step of replacing the 1080p Samsung with a 32-inch, 75Hz ASUS 2560×1440 display, bringing 75% more pixels to my horizons. I am able to run a solid 60fps (v-sync) with all settings maxed, though I’m not using motion blur. (75fps v-sync stutters on some worlds, for what it’s worth.)

So, recently I was in a tech forum asking advice on GPU performance tuning for the new display when I got several replies pointing out that I have “a crazy powerful PC just to play No Man’s Sky.” “That’s a lot of coin for one game…” and the like. And I had to admit…that is a lot of coin for one $60 game. I kept thinking about this, so I sat down and went through email receipts to calculate just how much I’ve spent on this game. I was a bit astonished at the tally. Obviously, I knew it would be high but… 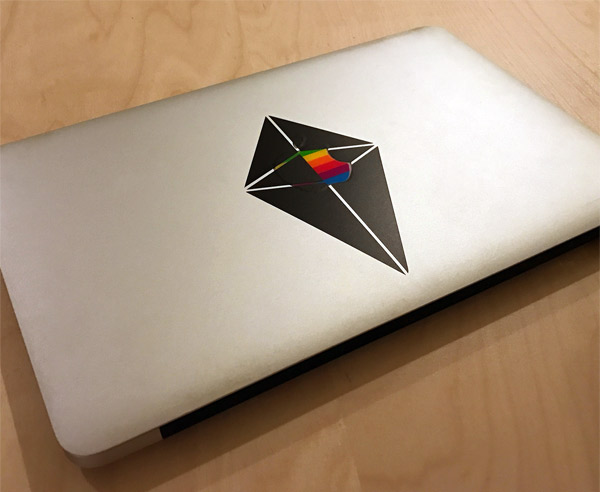 Now, I’m certainly not writing this post to brag about how much stuff I’ve been able to purchase. Concern that this post would be taken like that has almost kept me from publishing it. No, the reason I am posting this is the same reason I’ve been evangelizing the game on social media. More on that in a moment.

To say that No Man’s Sky has had a rocky life is an understatement. The hype storm that the media spun up starting years prior to its release was immense. Many who had been waiting for NMS felt it did not live up to the hype or to certain promises made early on by Hello Games. Many jumped in, ran through the story mode (the “Atlas Quest”), “finished” the game, and felt the experience too shallow. Until the huge Foundation update, the biggest NMS Reddit sub was filled with more seething vitriol than I’ve seen anywhere else on that website.

I feel that No Man’s Sky has largely been misunderstood. The countless worlds that make up the NMS universe are not merely places where you can find resources to fuel your ship to “race to the center” and then be done with it. These are enormous, fully realized, procedurally generated worlds with incredible detail. A person could spend months exploring a single planet or moon (and I’ve chatted with several who have). A player who has “finished” No Man’s Sky has missed the point; they have not fully experience the game, I feel. I present a quote from my first post about No Man’s Sky,

All my life I have dreamed of exactly this in gaming — an interesting, alternate universe, massive in scale, in which I can freely wander and explore at my own pace. That is what No Man’s Sky is to me, and it’s my observation that many others are similarly moved by the game. The fact that the universe is procedurally generated and that even the game’s creators can’t describe everything that’s out there to be encountered ads to the incredible sense of the unexplored, the alien. There is a lovely feeling of solitude to the whole experience of discovering a world, leaving your mark on it, and moving on to the next. 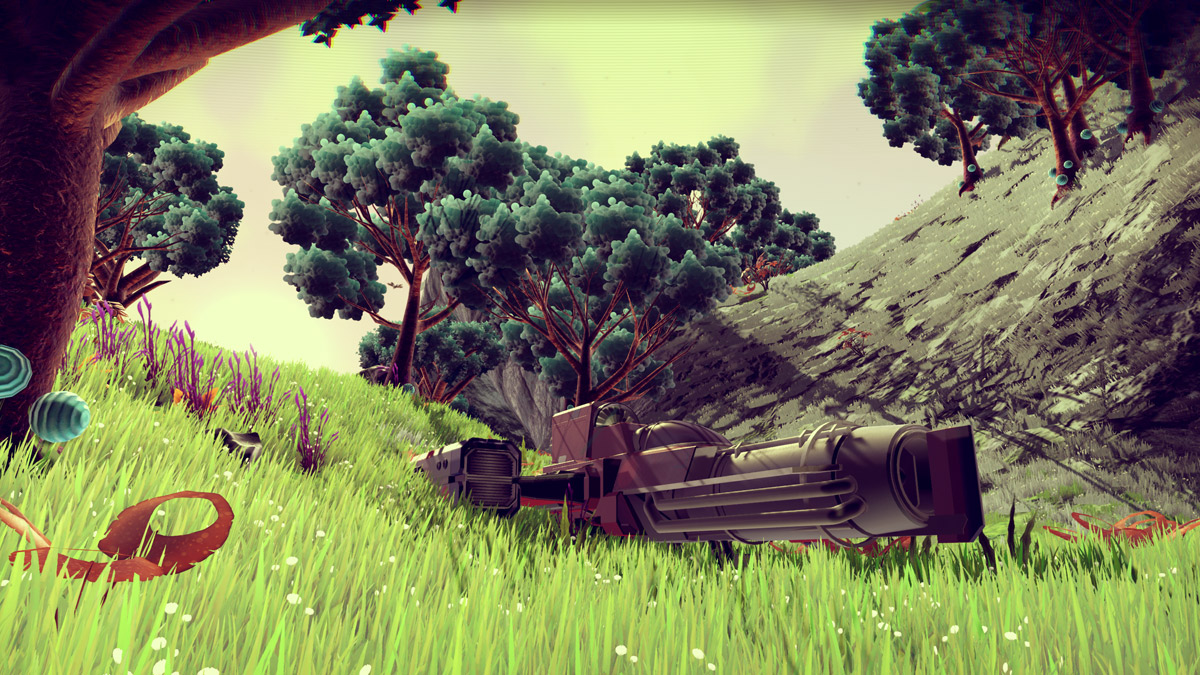 The reason I’m sharing the fact that I’ve spent so much on No Man’s Sky is to suggest that maybe there’s more going on in this game than those who panned it took time to notice. (How could a guy who’s been playing video games for 37 years go in so deep on a game that’s just…hollow?) And why is it that I care? Because I think No Man’s Sky is an astounding achievement and I hope to prevent the curious from giving it a pass because of the #gamebro hate that I feel is misguided. No Man’s Sky truly is an escape to another world — countless other worlds, actually. It’s a singular experience that should not be missed.

For me, No Man’s Sky has been worth every penny.

Update Note: In response to some of the comments I’m getting — yes, the bulk of money spent here was on solid PC hardware, which can be used for many things other than No Man’s Sky. I am calling this PC hardware money spent on NMS because I have no particular interest in using a Windows PC, I use the iMac (2011) next to it for everything else (I am a Mac / UNIX guy), and I certainly would not have put together this PC were it not for No Man’s Sky. I have installed a few games besides NMS (Witcher 3, Dirt Rally, Forza 3, E:D, etc.), but as evidenced by my Steam profile, I spend very little time in any other game on this PC.

This entry was posted in Gaming, No Man's Sky. Bookmark the permalink.

34 Responses to Did You Hear About That Nutter Who Dropped $6K on No Man’s Sky?! [Updated!]