The reason why is a funny little story. 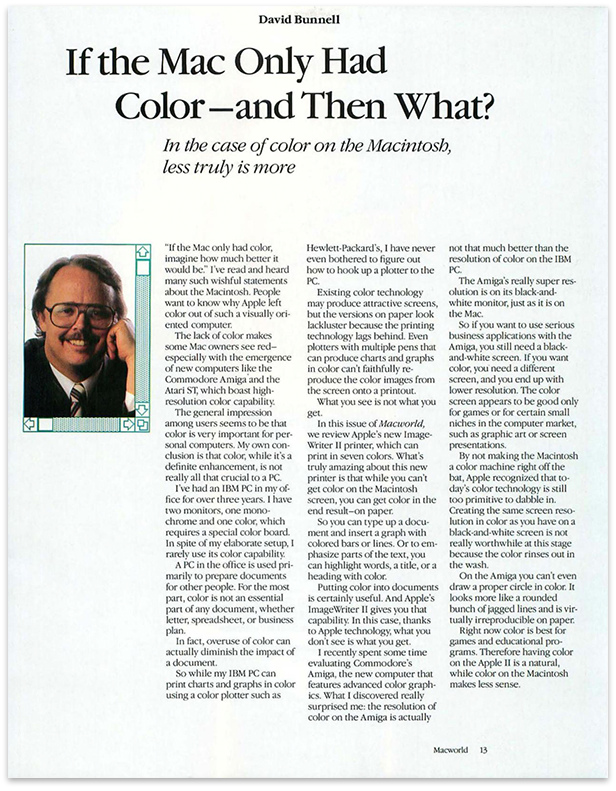 I grabbed a few computer magazines from the 1980s off of my shelf the other day and sat down to flip through them, as one does. Shortly after opening the January 1986 issue of Macworld (volume 3, number 1) I noticed it was missing a page. Page 13 had been torn out, fairly cleanly. I pondered this for a moment and then the memory came back to me.

In January of 1986 I owned an Amiga 1000 and had since the first units appeared in the local computer store in October 1985, shortly after the Amiga launch. I had been wanting and waiting (to sell an Apple //c) for a Macintosh during the summer of 1985. And, I got one…but returned it after a week or so because of encountering the Amiga in person at the aforementioned store. I was still receiving my Macworld subscription, though.

On page 13 of the January 1986 issue, in the publisher’s column, David Bunnell ran a piece entitled “If the Mac Only Had Color–and Then What?” The piece spoke of the frustration some Mac owners were feeling, seeing GUI-based machines sporting color displays such as the Amiga and Atari ST hitting the market. (The Macintosh II, offering a color display, did not appear until the following year.) Bunnell tried to allay such reader envy, pointing out that his three-year-old office PC had two monitors, one color and one black and white, and that he almost never used the color display. He went on to speak in high terms of Apple’s new ImageWriter II printer, reviewed within the issue, capable of printing seven colors, even on the Macintosh.

Bunnell then headed in a direction that raised my 13-year-old ire. He indicated he had recently spent time evaluating the Amiga and — well, I’ll let him speak for himself.

The Amiga’s really super resolution is on its black-and-white monitor, just as it is on the Mac.

So if you want to use serious business applications with the Amiga, you still need a black-and-white screen. If you want color, you need a different screen, and you end up with lower resolution. The color screen appears to be good only for games or for certain small niches in the computer market, such as graphic art or screen presentations.

By not making the Macintosh a color machine right off the bat, Apple recognized that today’s color technology is still too primitive to dabble in. Creating the same screen resolution in color as you have on a black-and-white screen is not really worthwhile at this stage because the color rinses out in the wash.

On the Amiga you can’t even draw a proper circle in color. It looks more like a rounded bunch of jagged lines and is virtrually irreproducible on paper.

Right now color is best for games and educational programs. Therefor having color on the Apple II is a natural, while color on the Macintosh makes less sense.

As a (13-year-old) Amiga user, that really pissed me off. Commodore did not launch the Amiga with or promote any monochrome display. The Amiga’s high-resolution screenmode was 640×400 pixels (plus overscan) in 16 colors out of a 4096-color palette (while the Mac’s was 512×342 pixels, black and white). In order to work with less expensive 15kHz screens, this mode was interlaced (like television), and so GUI-type on-screen images exhibited flicker. I have heard that Commodore planned to release a long-persistence (slow-phosphor) RGB monitor to reduce flicker, but I don’t believe that ever made it to production. I spent hours and hours using Deluxe Paint to create video art in the interlaced mode. And the circles were smooth.

I had recently received an Okimate 20 high-resolution color printer for Christmas and my bedroom wall was covered with full-color printouts of my “paintings.” I was in such a lather after reading Bunnell’s article slighting the Amiga that I sat down and typed out a letter — to Commodore — making them aware of the shots fired, complete with a few (smooth) circles drawn in color at the bottom. I printed it out on that printer, evidence of the Amiga’s ability to reproduce color circles on paper, and mailed it off to West Chester, PA along with page 13. I have no recollection as to whether or not I expected some kind of response. (I received none). I suppose it was mainly catharsis.

Since my copy of this Macworld is missing page 13, I had to consult the Internet Archive to capture the page in question.

This entry was posted in Amiga, Just Rambling, Macintosh. Bookmark the permalink.

8 Responses to My January 1986 Macworld Is Missing Page 13