Computer Users’ Groups of My Past [Updated] 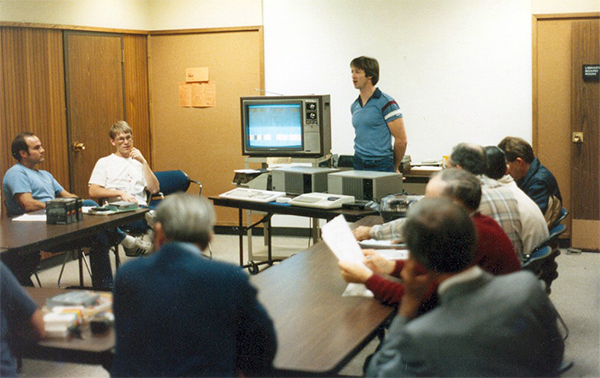 I’ve spent the past couple of months procuring parts and assembling a 486-class DOS PC that is more or less a replica of the 486 PC I had back in college, in 1994. That’s the machine that first delivered the Internet to my home (by way of dial-up 28.8Kbps PPP). Prior to that it was all BBSs and FidoNet relays. Once I had the Internet on my desk, the Usenet, or “news groups,” was my arena. It’s still around, but it doesn’t have the same feel, to me, that it once did. There, I’ve long been a stranger.

With this “new” DOS PC I built, I’ve been thinking a lot about things that were and are no longer. Another item on that list, for me, is the local computer users’ group.

Back in the day, young readers, every system had its own ecosystem. This was before the Mac / Windows domination. That being the case, and given the lack of widespread, online communication, users’ groups were an important way for devotees of a particular system to share tips, techniques, and general knowledge.

I was a member of several users’ groups in my youth in the Hampton Roads area of southern Virginia (USA), and I wanted to list them here, along with the names of a few group members that I can recall, in hopes that this post might find them out there (please comment, old friends).

* UPDATE: Shannon, above, kindly provided me with an archive of P.A.C.E. newsletters that I share in the “future” post, “An Archive of Newsletters from My Users’ Groups Past.”

For a fledgling geek, users’ groups were wonderful. My parents divorced in the mid-’80s and my father would drive me to the various group meetings around town, over the years, usually held in a local high school or community college. We saw great new hardware and software demonstrated, and generally had a splendid time as a like-minded group. I wish I still had just one of the membership cards from the groups of my past to share, but it seems that all have disappeared.

It’s worth noting that users’ groups still exist. I have considered, on several occasions, attending a somewhat local Amiga group and an Apple Newton group in Maryland, but I’ve not yet taken the time, sadly. Currently, Twitter serves as my sort-of users’ group surrogate. But, it’s nicer to gather in person.

Are you or were you part of a users’ group? Please share your memories.

UPDATE: I thought I’d add in mention of the names of a few BBS SysOps and regulars that I used to chat with back when “online” meant something a little different for most of us.

This entry was posted in BBS, Just Rambling. Bookmark the permalink.

13 Responses to Computer Users’ Groups of My Past [Updated]