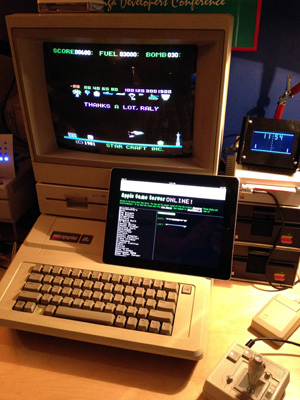 About five years ago I made a post about the Apple II Game Server. It’s a Java application that lets Macs and PCs feed program data into any Apple II via serial null-modem cable — no disk drives required. It’s a terrific effort by creator Brendan Roberts.

A few weeks back, Egan Ford, who was inspired by Roberts’ work, assembled a spiritual successor to the Apple II Game Server and placed it online. The Apple Game Server Online is a wonderfully retro-styled website that features a list of Apple II games — now about 200 in number — and associated audio files that contain the audio data from data cassette versions of the games. These audio files can be played back from the browsers of many networked devices out there (like an iPad or a laptop) to load any of the listed games into an Apple II, II+ or IIe when tethered to the vintage Apple’s audio cassette input jack via audio cable.

The drill goes like this: you link your Apple II to the web-enabled host device, type “LOAD” at the Applesoft BASIC prompt, and hit “PLAY” in the web browser. In (usually) less than 20 seconds later, you’re playing a game. It couldn’t be much easier, and the data transfer is not far from floppy speed — and it’s getting faster; Ford has been updating the project earnestly.

I updated http://asciiexpress.net/gameserver today.  With Michael Mahon’s help I was able to speed up the 12kHz/6kHz 8000 bps HIFI to  12kHz/8kHz 9600 bps.  I also fixed a big that effected some games that  loaded below $800.  Lastly I removed the CRC code in favor of a faster  checksum + file length check.

Eric Ford’s efforts here join those of Brendan Roberts in contributing greatly to the “Apple II Forever” mindset. As the remaining supply of 5.25-inch floppy disk media and functional, mechanical drives age and dwindle, finding alternatives for program storage must be a priority for the vintage computer enthusiast.

As you can see in the above video, I’ve had fun putting the system (v0.1 is shown) through its paces. If you’ve got an Apple II with a cassette input (any II other than the //c or IIgs) stored away somewhere, don’t miss this easy way to have a little retro fun.