A Look at the Sauciest Magazine I Ever Owned

Posted on January 2, 2012 by Blake Patterson 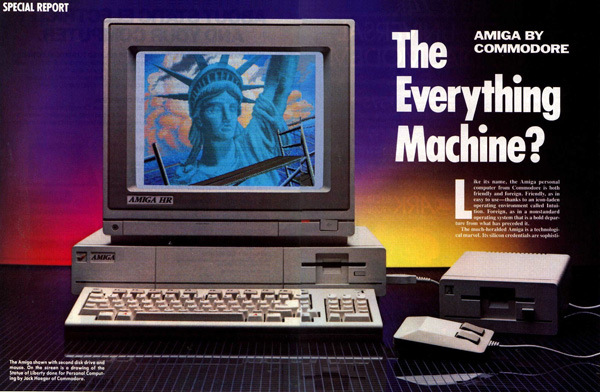 One of the most exciting computers that I ever owned, and certainly one of the most significant in the history of personal computing, is the Amiga 1000, the first Amiga model release by Commodore in the fall of 1985.

At the time of its release, the system featured a powerful 7.14MHz Motorola 68000 processor, on-board custom co-processors to aid in graphics and audio tasks, a UNIX-like, pre-emptive multitasking operating system, and a graphical user interface to tie it all together. The Amiga 1000 unit retailed for $1,295 at launch and was significantly more powerful in every respect than the flagship IBM computer, the PC/AT, which featured a 6MHz Intel 80286 processor and retailed for approximately $6,000.

I learned about the coming Amiga in the summer of 1985, though, sadly, I don’t recall where. It certainly wasn’t “online,” which then would’ve meant on a dial-up BBS of some sort, as I had no modem on the Apple //c I was using at the time. I was intrigued by what I heard and excited about the prospect of owning one. (I was definitely outgrowing that //c.) It wasn’t until I walked into a Waldenbooks and picked up the August 1985 issue of Personal Computing magazine, however, that my lust truly began. And, began, it surely did. 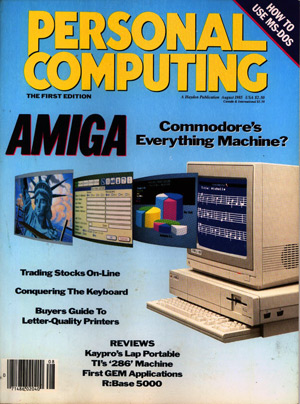 Remember, younger readers out there, this wasn’t just a faster version of the same old thing, like we generally see with computers today. This was a time when most every new computer brought with it an entirely new operating environment. To embrace a new platform in those days was to venture into unexplored shoals. (It was a thrill I experienced many times, but one that I lament new users today will never know.)

From that day until the day in late October 1985 when I brought my Amiga 1000 home from Chaney Computer in Newport News, VA — the first Amiga 1000 sold in the state of Virginia — I was transfixed by that copy of Personal Computing. I carried it everywhere, even to school, and read it constantly. I read it over and over and lusted and imagined and, in time, I pretty much wore it out. And sadly, like most of the computer magazines I had back in the early days (many of which I’ve reacquired in more recent years), I’m not sure where it went off to.

The degree to which that magazine impacted my life at the time was so dramatic that, a few years back, I sought to locate a copy, to have a look at what it was that sustained me so, until I had my hands on the hardware. I’ve had an eBay automated search in place for three years, at least, but I’ve never found a copy.

Well, I recently posted a request for the magazine over at Amiga.org and, as good fortune would have it, a reader there had scanned the magazine some years before and was able to provide me with a series of images that captured every page of Amiga coverage in that issue. Hats off, JimS — and many thanks.

In order to share this wonderful bit of computer journalism with others out there, I’ve assembled the various page scans into an ordered PDF that includes every bit of Amiga mention in that 27 year old issue of Personal Computing.

By all means, have a look: Personal_Computing_1985-Amiga.pdf

Please, do let me know if you happen to recall reading this particular issue, way back when. And, for those that are strangers to that wonderful period in computing history, I hope these scans convey a bit of the excitement that we old geeks enjoyed so long ago.