Posted on September 6, 2019 by Blake Patterson

In 1989 I wrote a letter (envelope, stamp, and all) to game publisher California Dreams asking a technical question about the game Tunnels of Armageddon for the Apple IIgs. But, they never wrote back.

I was thinking back on this recently, with some sadness, and that set me about doing a bit of internet sleuthing. And I’m quite glad that it did. I am happy to report that here, 30 years later, I finally have an answer, and not from the publishing house, but from the mouth of the game’s original developer, from across the world in Poland.

Of all the computer system in my past, the Apple IIgs (which we purchased in the autumn of 1986) is one of my very favorites. But, given my fickle tendency to jump from one platform to the next, I left the IIgs behind a year or two later, about the same time that several close friends acquired their own IIgs systems.

Fridays after school, a couple of friends and I would gather at one of our houses, watch movies, eat pizza, and show off this or that new game or demo we had for our respective systems. One day in 1989, I was over at my IIgs-owning friend’s house (I had an Amiga at the time) and he showed me this game that I found to be truly impressive, which was saying something (I had an Amiga at the time…). The game was Tunnels of Armageddon. It’s a futuristic 3D racing game of sorts, in which you must successfully and rapidly navigate a series of tunnels discovered under Antarctica, carved out by an alien race as a test of humanity’s intelligence. Success will grant mankind knowledge of hyperspace travel, while failure will lead to the extinction of humanity. 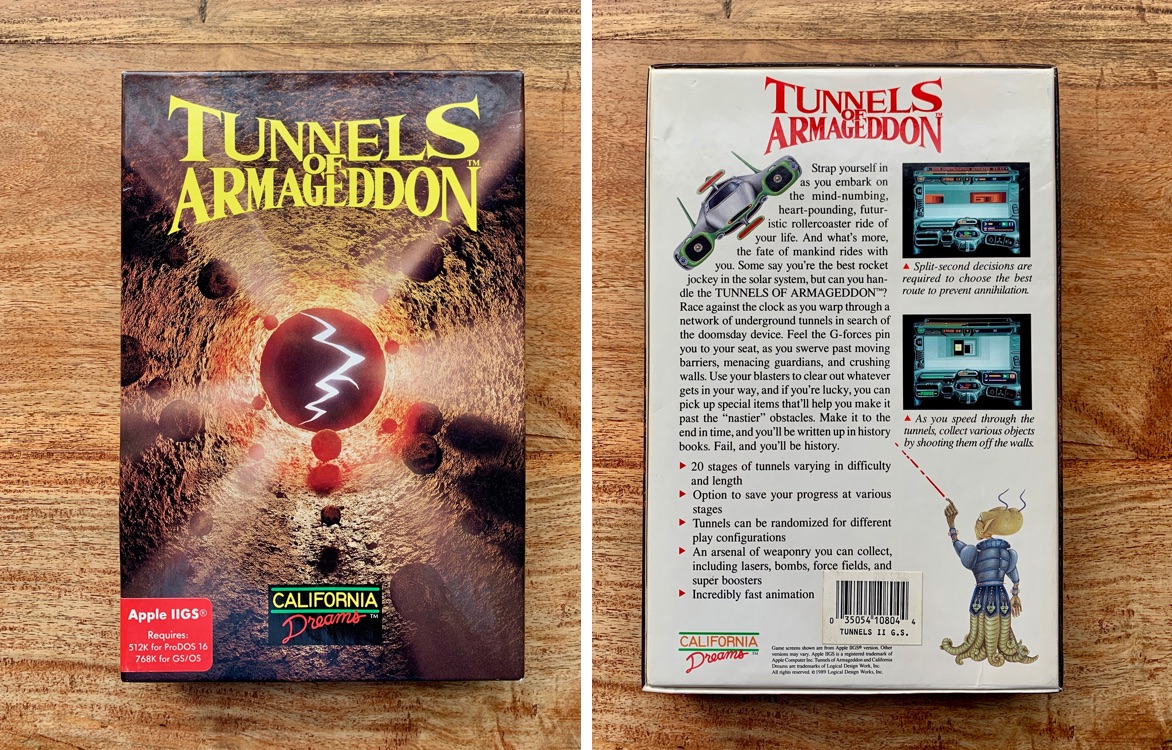 The thing about Tunnels of Armageddon is its sense of speed. The tunnels you must race through are rendered as a series of rectangular wall or border sections that zoom towards you. There are obstacles and power-ups here and there, as well as many branches, some leading to dead ends. Looking with today’s eyes, it’s a rather simplistic affair, but gameplay feels extremely fast and very smooth, which is a real achievement on the Apple IIgs, which is rather limited as a high-speed gaming platform as compared to the Amiga and Atari ST, which were it’s closest equivalents.

This friend of mine had also gotten into Apple IIgs assembly language programming and had the associated Apple hardware reference texts (which are currently sitting on my shelves) on hand. Flipping through them, I had learned of the “Fill Mode” of the IIgs graphics chip, which was basically the one trick it was capable of using to help unburden the CPU during screen drawing. In a nutshell, with Fill Mode activated, only the outline need be drawn in order to render a solid, filled shape; the graphics chip would do the rest. It was a standard feature of more advanced “Blitter” chips on other platforms of the day, like the Amiga and Atari ST, but it was the IIgs’ one graphics boon. I was intrigued by this hardware capability and assumed that Tunnels of Armageddon utilized it, but I wasn’t certain, and so I wrote to the publisher to ask that question. And, I never got an answer.

That is, until I got in touch with Jarek Achinger, the game’s original programmer. I found his name easily enough on the game’s title screen and did some searching and found the website of a Polish software company he seemed to be associated with, and left a contact request on their general Contact Us page that I hoped would be forwarded to Jarek. A few days later, Jarek (who turned out to be the company’s owner) emailed me and was apparently intrigued that I had a question about an Apple IIgs game he had written over 30 years earlier. 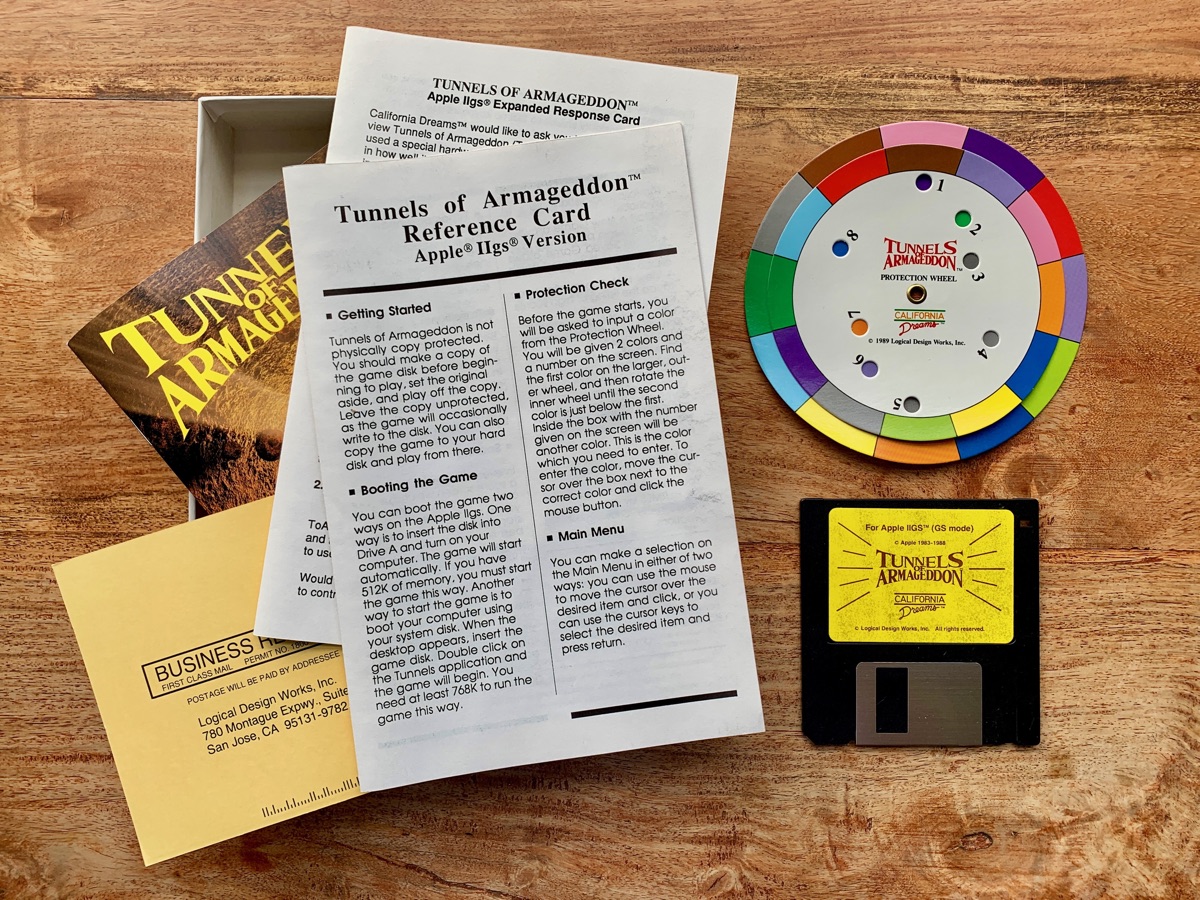 In an email back-and-forth that followed, I learned that Jarek was, at the time, working as a game programmer in the Polish subsidiary of a U.S. company known as Karen that was involved with translating games between Atari 8-bit, Commodore 64, Amiga, and PC. Jarek was mainly involved in translating games in assembly language from Atari 8-bit to the C64, WarGame Construction Set, Craps, and Triango being among the titles he ported.

Jarek gave me the answer that I had waited so long to hear: Yes, Tunnels of Armageddon was only possible on the IIgs using the system’s Fill Mode. He went on to tell me the overall story of the game.

The Apple IIgs was launched and the company gave me one to find out what was possible. The machine was terribly slow, but the sound and graphics were nice. Then I got sick with the flu and had to stay in bed, which was really boring. So I started experiments with color cycling within graphics editors to get the effect of motion inside circular tubes. 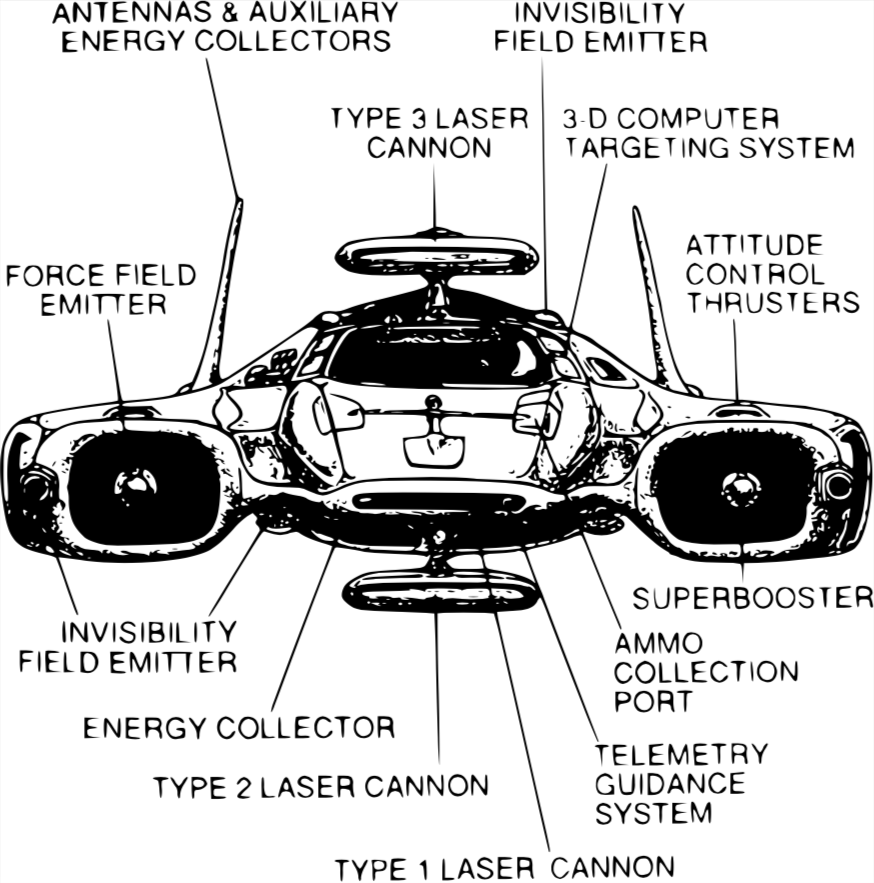 I went through the manual and found the fill mode. So it was easy to create frame-shaped quick graphics. I decided to use rectangular shapes instead of circular ones, because drawing straight lines was faster than drawing semicircles, and in the IIgs every spare pixel mattered. :-) You just put one vertical colored pixel line to the left and then a black one to the right.

I wrote the main engine in assembler to speed the graphics engine to maximum (all our translations were written in assembler too, so I was experienced) (By the way: I still find it powerful to know and understand assembler in hard debugging processes) I implemented real physics of concussions and friction.

The last game I was working on has never been released: The Dark Queen – animated Warcraft style chess. The company was liquidated.

Shortly after discovering the game on the IIgs, I acquired the Amiga version. And, I’ve since installed the DOS version on my 5×86 PC. Despite both of these platforms being rather more capable than the Apple IIgs, neither of these versions feels as “on point” as the IIgs original, to me.

I shared various social network links regarding today’s Apple II enthusiasts and Jarek called the communities “fantastic.” I’m very pleased to have gotten an answer to my 30-year-old question, but am equally pleased to have made an Apple II developer from decades past aware of the current community celebrating the platform all these years later.

I encourage anyone driving an Apple IIgs (or a system emulator) to have a look at Tunnels of Armageddon.