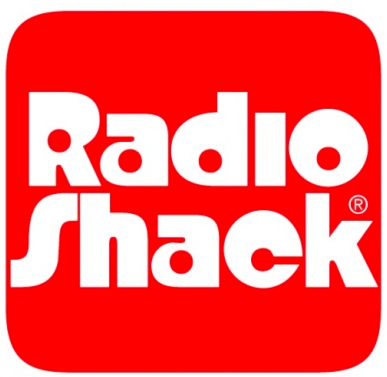 As everyone reading this is surely aware, Radio Shack has very recently filed for Chapter 11 bankruptcy protection and is in the process of closing 1784 of their stores. And there can be no doubt that everyone reading this saw the writing on the wall years ago. And that’s where I will leave the matter of their decline, as the purpose of this post is not to malign the once mighty, fallen. The purpose of this post is to share my memories of the Radio Shack that once was. Here we go.

The first memory I have, connected with Radio Shack, is the crystal radio kit my father gave me when I was about seven years old. (A crystal radio is a passive receiver that requires no external power source. I recall finding that pretty amazing.) The next memory I have is of the first time I recall being inside a Radio Shack store. I was with my mom and dad in a shopping mall in Harrisonburg, VA, wanting some toy from a toy store there. My dad told me to come with him, as there was something I’d probably like better than the toy. He took me to a Radio Shack a few stores down the way and bought me a portable AM transistor radio (this model but black, not red). He was right about the toy, by the way.

I grew up along the York River in York County, VA and, living on the water in that region, hurricanes were something we had to watch out for. I recall getting front-line weather news way back when via our Realistic Weatheradio, perched atop the kitchen fridge. (It was a hurricane that, ultimately, destroyed the house I grew up in.)

Dad was a NASA engineer and, unsurprisingly, enjoyed poking around the local Radio Shacks (in the Hampton Roads area of Virginia) with some frequency. I was often there with him or in a store on my own while my mother shopped down at the mall. The things I was most interested in, of course, were the computers. 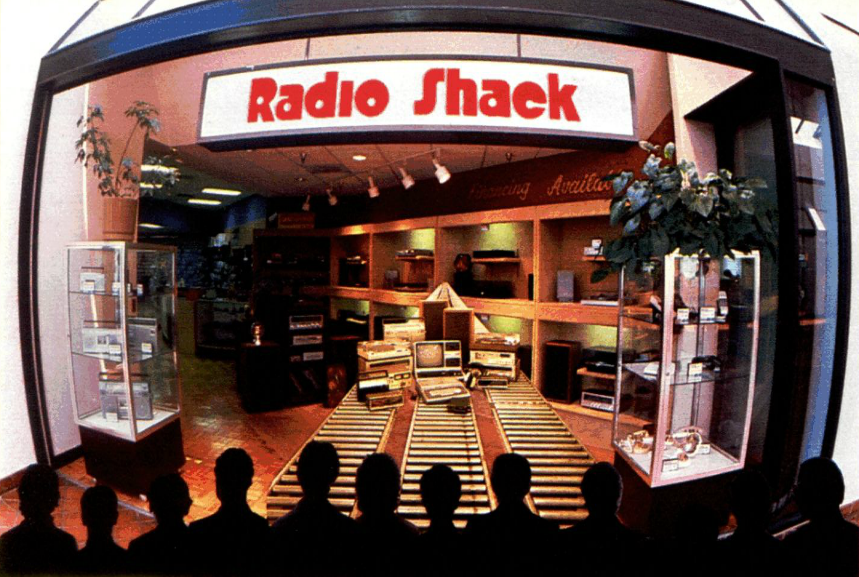 I started taking an interest in the computer displays around 1981, as I recall. I would spend a lot of time on the TRS-80 Color Computer, playing whatever cartridges were laying out. I used to love playing the CoCo version of Mega-Bug with its nifty little magnifying glass effect — it was always a treat to find that running in the store. (Weak joysticks, though.) The more business-oriented machines were intriguing to me, as well. The TRS-80 Model II with its 8-inch floppy drives looked, to me, like an intimidatingly powerful computer. The Model III had my attention, also. I would sit down in front of those all-in-one systems and type things into their TRS-DOS command lines…but I didn’t know any of the commands.

Back in 1983, the Radio Shack at our local mall (Coliseum Mall in Hampton, VA) had a big computer display set up as an island out in front of the store. I remember spending a lot of time with a Model III they had on display on day, chatting with a saleswoman who was showing me the different features. I was 10 at the time and had a TI-99/4A system, but I really wanted that Model III. The woman showing off the system told me I should wait, though — the improved Model 4 was just a few months away. I did end up getting a Model 4, but relatively recently (well, 7 years ago as I write this…), not way back when.

As time went by, I specifically recall the arrival, on the sales floor, of the odd little MC-10, the CoCo 2, the laptop Model 100 (which was pretty great), the impressive PC “compatible” Tandy 2000 (one of the few systems to run on an 80186), and then the rather more compatible Tandy 1000, an IBM PCjr clone. The CoCo 3 ended up being the last of that 6809-based series, and is arguably one of the most powerful 8-bit home computers ever made. It had an easter egg in ROM that displayed a monochrome image of the machine’s designers on the screen and I would always kick that off, whenever I came across one in a store. 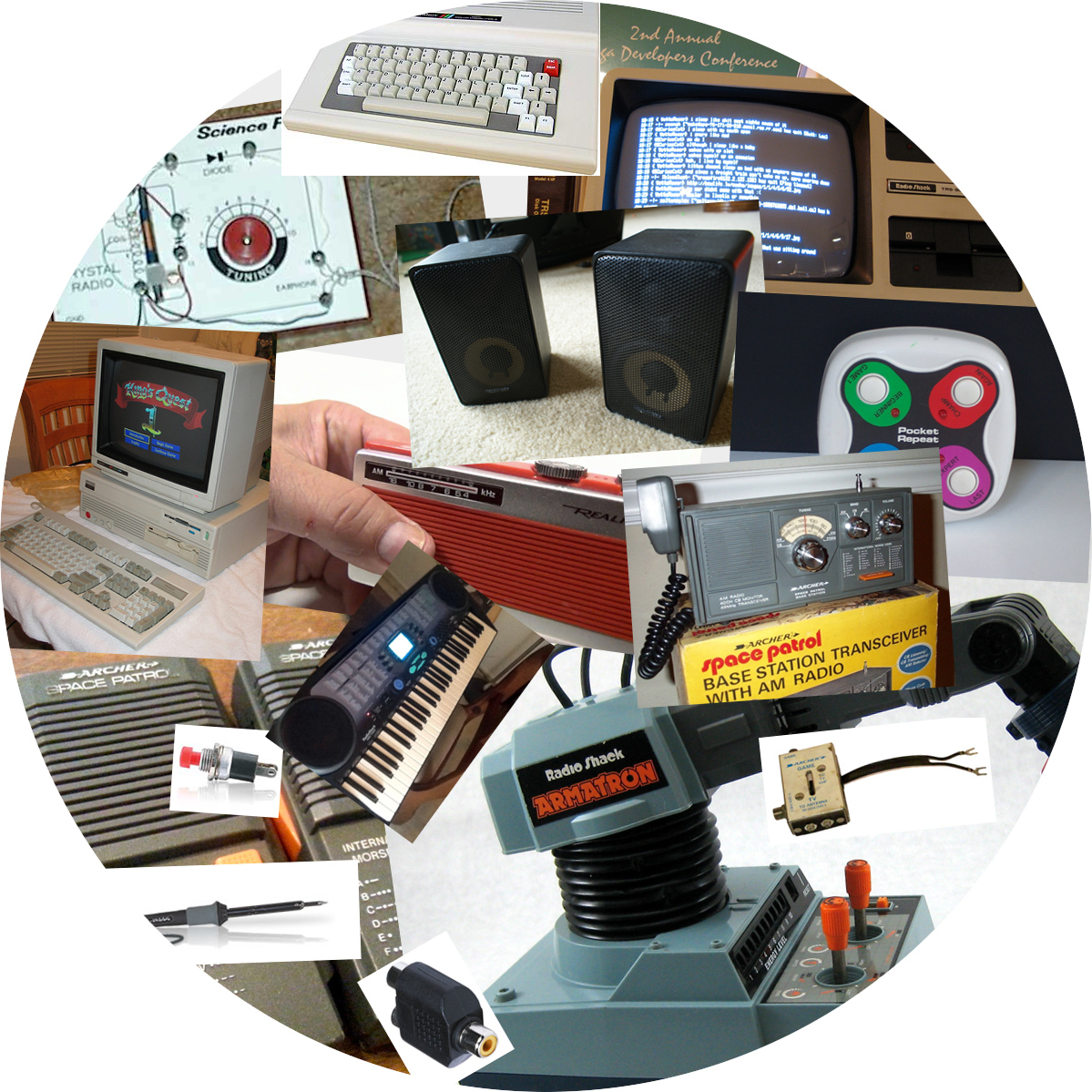 Over the years I bought a lot of gadgets and parts at Radio Shack stores (some that I recall are in the collage above), but only one computer. Well, two computers. More specifically, I purchased the same model — twice (in 1989 and then 1990, first at the Radio Shack in Newmarket South shopping center in Hampton, VA and then at the Newmarket North store, across the street). The system I speak of is the Tandy 1000TL, an odd configuration of an 80286 sitting in an 8088 motherboard with unusually capable audio hardware and MS-DOS v3.3 in ROM. The 1000TL is the first system in which I ever used a hard drive. I remember writing a review of it and posting it on a local BBS called Volksboard TBBS.

I saw lots of computers come and go on the Radio Shack floor. The last one I remember, shortly before Tandy stopped making their own systems, was the Tandy Sensation Multimedia PC, notable for sporting 24-bit (16.7 million colors) video hardware. Tandy sold its computer manufacturing assets to AST Computers in the early ’90s and then began selling third party systems, such as Compaq PCs. That’s when Radio Shack’s soul began to fade, I think. And, over the past decade or so, it faded right away.

Founded in Boston by two brothers in 1921, Radio Shack helped a lot of technology happen. It helped build Silicon Valley. It was a core resource during many key moments in the history of computing and communications. It saddens me to see how things have turned out.

Update – July 15, 2015: There is a Radio Shack about a mile from my house, here in Alexandria, VA. After the news I spoke to above, I hadn’t thought much about it and considered it closed. But, as I was driving past the other night, I noticed through the storefront windows that it seemed to be still operating. As such, when I found I was out of desoldering braid this morning, I decided I would swing through tonight and bring a few rolls home. (It’s to do with an Atari ST hardware project — blog post soon.) When I got there, just now, there were a few customers milling about, but more workmen dismantling the shelves, flooring, and ceiling panels. About half of the store remained and, as it turned out, the half that held the desoldering braid. It looks like I made my last ever purchase from the nearly gone, once great local electronics store.

2 Responses to Whither Radio Shack [Updated]