A Few Words About a Kare Package I Received Last Christmas

Posted on November 3, 2014 by Blake Patterson 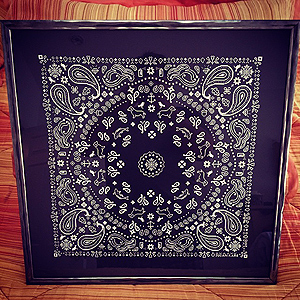 Last year I received in the mail a Christmas gift from a person I greatly admire, and that’s what this post is about. But, let me back up a little.

As regular readers may be aware, I have a few tech / “geek” tattoos that I’m quite proud of. The most recent, I was motivated to have inked after the death of Steve Jobs on that woeful Wednesday back in October 2011. As a tribute of sorts, I had what I felt was the singular, perfect representation of what I was trying to both capture and express inked on my right forearm. The image in question is the 32 x 32 pixel icon portrait of (a 28 year old) Steve Jobs that designer Susan Kare created back in 1983. It’s the tattoo I’m most proud of.

I have great respect for Susan Kare and have written about her in a number of posts on this blog over the years (which I will link at the end of this post). She was a member of the original Macintosh team, coming to Apple in 1982 after receiving a phone call from high school friend Andy Hertzfeld, a chief architect of the Macintosh operating system. Kare created the full set of icons and fonts that made up the graphical user interface of the early Macs. She played a truly critical role, given that the Macintosh was the first consumer-oriented computer in the world featuring a GUI. (The Xerox Star and Apple Lisa that came before were priced well beyond the consumer bracket). Since then she has done a great deal of work in the field, some of which she discusses in her excellent EG 2014 talk (which featured my aforementioned tattoo in the closing slide!).

Now, back to the gift. Not long after I got the tattoo, Susan Kare saw my post and shared it on the Kare Prints Facebook page. And, then, a little before Christmas last year, I received an email from Kare Prints saying that Susan had something she wanted to drop in the mail  for me, and a week later this arrived at my door. 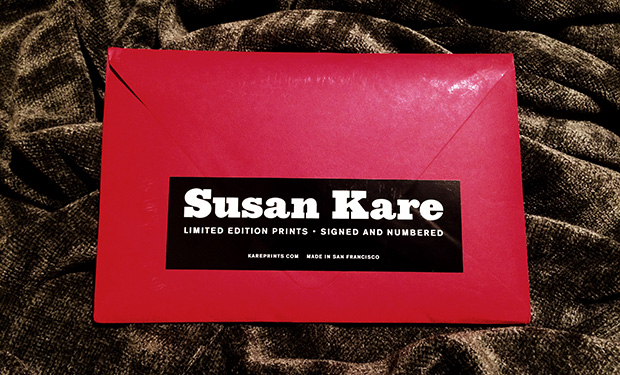 Upon opening this carmine curiosity, I discovered a folded black cotton bandanna, 22 x 22 inches in size, featuring a lovely and complex design comprised of a wide array of images from Kare’s past works woven together with a wonderful variety of new shapes and patterns. And all of it is beautifully pixellated.

I’ve been waiting until I had the piece properly mounted and framed before writing about it. I recently got it back from the frame shop and now have it hanging on the wall of my office in D.C. I think it fits in quite nicely. It is a work, and a gift, that I shall always cherish. 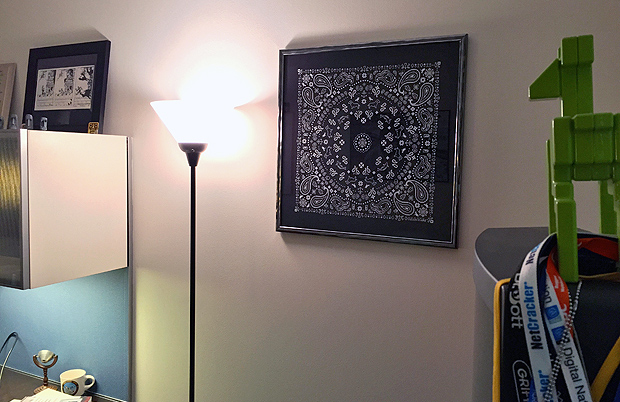 This entry was posted in Just Rambling, Macintosh. Bookmark the permalink.