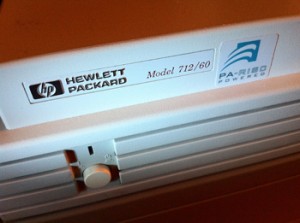 Over the years, as computing headed towards the mainstream and the industry struggled to figure out how to connect with the general public, there were some pretty bizarre marketing approaches the computer makers of the time ran up the flagpole. If you’re a regular reader, you’ve probably seen a few examples of what I’m talking about linked here on my blog over the years.

There’s the chilling and surreal 1985 Amiga 1000 TV advert from Commodore. There’s Honeywell’s “Email” print ad from way back when. Apple had some strange ones. Sega stayed classy, here. Sir Clive leaped for his Sinclair QL. SGI distributed an Octane promotional (music) CD. There was the Adam Creative Computer ad. And, who can forget Don’t Copy That Floppy (or its sequel)? There are fan support vids, as well: Apple II Forever, Only Amiga (I made a post about this one, recently), and, of course, I Think We’re A Clone Now.

Those are some strange message mediums, but I might have to set them all aside and call it on this early ’90s Hewlett Packard video advertisement for their HP-9000 Series 700 workstations. First off, let’s note that this is HP we’re talking about — 20 years ago, back when they made high end UNIX workstations and the RISC CPUs that powered them, and not just commodity Windows PCs. The Series 700 units were priced in the ballpark of $3,000 – $9,000 and were used mainly in science and engineering.

And this is the marketing video they put together…

I ran across this tonight after chatting with @FozzTexx about our own HP-9000 workstations. I have a model 712/60 running NEXTSTEP (read about it) that I haven’t booted up in a few years, and I started looking around the web to see what others were doing with their Series 700s. That’s when I ran across this video.

And it blew my mind.

So, there it is — HP marketing getting the message out about their new UNIX workstations 20 years ago. I never knew they had it in them.

UPDATE 5/27/2014: I ended up spending much of the weekend getting my Gecko back up to speed, on the ‘net, and loaded with a few apps. What a zippy little NEXTSTEP machine — with its 60MHz PA-RISC CPU it runs rings around my NeXTStation Turbo Color (25MHz 68040).

This entry was posted in HP, UNIX. Bookmark the permalink.