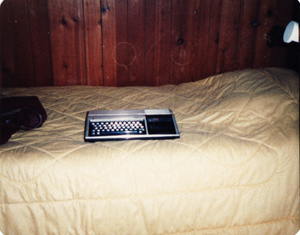 My first home computer was the TI-99/4A from Texas Instruments. I wanted to get a “real computer” (I had an Atari 2600 at the time), I bugged my parents, and I got to choose from what was on the (1982) market — within a certain price range. I recall choosing the TI mainly because it looked futuristic, the C64 looked ugly, and the Atari 400 had a lame keyboard. (the Atari 800, Apple II and IBM PC weren’t even in the running — too expensive.) I got it on Christmas morning, 1982. [The photo up there to the right is one I took of the TI-99/4A I received that Christmas morning, on the bed in my room just minutes after I received it, during a brief early-’80s equivalent of a “time out” I was subjected to due to the apparently disconcerting fit of joy I demonstrated upon receiving said unit…]

I had a lot of fun with the TI, and was able to expand it significantly, making it the gift focus of my birthday and the following Christmas. (I even sold my motor dirtbike, powered by a lawn-mower engine, to a neighbor for $99 so I could buy the TI Extended BASIC cartridge.) It was an extreme thrill to have my own floppy drive and store programs on disk rather than tape. Just holding a floppy disk, back then, was awesome, somehow — it was utterly foreign and the experience is hard to describe. Unfortunately, Texas Instruments crashed and burned terribly in the face of the competition in the home computer market and, in early 1984, Montgomery Wards was selling remaining 99/4A units for $25, as I recall. Because of all this, I wanted to jump to another computer, and my parents were behind it, having read about the TI’s woes in the paper and seeing how hard it was getting to find TI-related items in stores.

So, we listed the lot for sale in the local paper.

I got a few calls from people asking after the system’s details and the solidity of our asking price as days passed, of course. And then…one day…I got this unusual call I’ve remembered these 28 long years.

A man rang and indicated he wanted to ask about the TI system for sale, and so my mom gave me the phone. I have no idea who he was. I told him to fire away. He then began to explain to me that he was a happy TI user and had a great fondness for the platform. He then asked me if I was sure I wanted to sell the system. I explained to him that, given TI’s market exit, I wanted to jump to a different platform (the new Apple //c, which my parents agreed to go for, given Apple’s growing educational reputiaton). He acknowledged that, but wanted to tell me a few things about the TI, before I sold.

He informed me that the TI-99 was the first 16-bit home computer (news to me!), and spoke of the power that 16-bit offered vs. everyone else’s 8-bits. (He failed to mention the dubious bus architecture TI’s engineers were forced to bestow upon the system.) He then told me about this 256-bytes of “Scratchpad” memory that was in the TI that let special things happen. I, in my mind, pictured a little text editor with a yellow paper pad allowing 256 letters to be written, I recall — I pictured it vividly. I later learned that the 256-bytes of “Scratchpad” memory was the only proper 16-bit memory in the TI’s abysmal architecture, and it was often used for pseudo CPU registers, as the 16-but TMS9900 CPU had no actual registers, but used attached memory for that purpose, in the name of multi-user, context-switching efficiency. (Have a chunk of memory for each users’ “registers” and switch from one chunk to the other with just one pointer — it was inherited mini-computer DNA from TI.)

The guy talked to me for about a half an hour and laid on this-after-that win that the TI offered, and then asked me, at the end, if I was sure I wanted to sell. The entire purpose of his call was to convince me not to sell the TI. But…I was still sure. If I had been a little more tech savvy at that point, I might not have been sure. If I had been a lot more tech savvy at that point, I still would have been sure. :-) It was a dead platform, and one that had been poorly architected, though that really was due to some internal roadblocks at TI and not the machine’s engineering team. 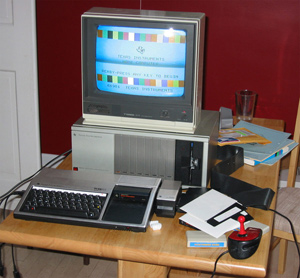 It was such an unusual call that I’ve remembered it for nearly three decades. I’d love to meet that man today, if he is still alive — we’re obviously kindred spirits. My mother, I recall, was highly concerned that an adult male called to chat with 11-year-old me for so long. I assured her it was ok. Anyway, we sold the TI system to the brother of a stock car racer who wanted to use the system to calculate engine and suspension stresses in TI Extended BASIC. I’m not sure if he got that going or not. [Early-1984 TI-99/4A buyer in Yorktown, VA — ARE YOU OUT THERE??!!]

Anyway, I got the Apple //c in April or May 1984 and, I must say, preferred it strongly to that TI-99/4A, my first computer. Still, the TI holds fond memories, and I put together a full system some years ago, that sits on my desk today. I fire it up for the occasional game of Parsec or Ant Eater.

Things in computing were so much more fun, back then. Really, they were.

This entry was posted in Down Memory Lane, TI-99. Bookmark the permalink.