One of the Finest iPad Apps Is No More – Thanks for the Update, Twitter

Posted on October 1, 2012 by Blake Patterson 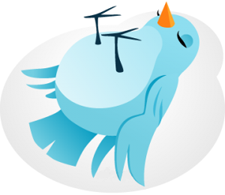 I know this is my vintage computing blog, but sometimes I need to stray off just a little. (That’s why I took pencil to the masthead logo a year or so ago…) Right now, I just need to vent my frustrations with Twitter Inc. for pushing the turd that is the latest version of the Twitter iOS app into the App Store.

I made my first tweet over four and a half years ago and, presently, Twitter is the thing on the Internet that I find the most useful and fulfilling. When I signed-in to twitter for the first time, there was no iPad (and the iPhone was brand new), but the iPad quickly became my device of choice for interacting with Twitter, and with the Internet in general, really, when I’m not working (writing, coding, etc.).

Over time, various apps arrived that provided a better Twitter experience for iOS users than that of the Twitter website. Now, I’m not going to go into the whole history of the iOS Twitter app landscape as I’m prone to do (I just deleted a paragraph, in fact, where I had begun to do so…sigh…), but suffice it to say that, on the iPad, Twitter (the app from Twitter Inc., themselves) that sprang from their purchase of Atebits’ Tweetie a couple of years back, was — until quite recently — the best iPad Twitter experience out there. Its interface was, I will say, perfect for the multitouch, 10-inch tablet. It featured panes of information that could be slid to the fore or conveniently out of the way such that amazingly efficient use of the device’s screen could be made. The interface felt very (literally) hands-on, lending to a surprisingly immersive experience for a Twitter app.  Twitter on the iPad was what you used to show off the device to curious friends. It felt like the future.

When version 4.3.2 of Twitter was replaced with version 5.0 in the App Store on September 18th, all that was nearly magical about its interface was gone, replaced by a new, dramatically less functional interface the motivations behind which I will surely never understand. This past weekend, I updated Twitter on my iPad and, when presented with this new interface, I was nonplussed. My first thought was that somehow, perhaps resulting from an App Store glitch, a very old version of Twitter had been installed on my iPad by mistake. As I moved through the app, I became more and more alarmed as well as confused as the apparent fracture in functionality that first greeted me grew into a mighty, gaping chasm upon further inspection.

One set of screenshots that compares the Twitter landscape view of version 4.3.2 to that of the new version 5.0.2 should really be all one need see to at least get some small taste of the incredible step backwards in interface design with which Twitter, Inc. has saddled its once elegant iOS client. 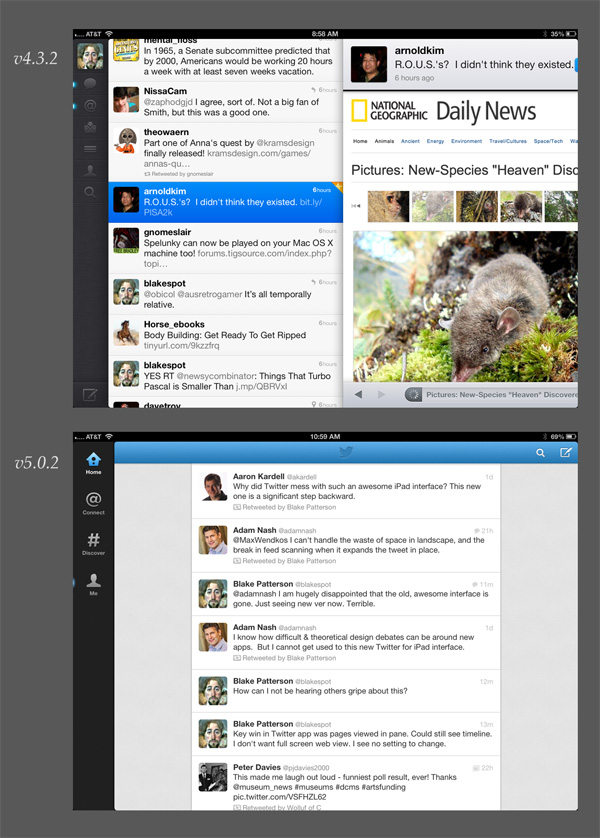 The upper screenshot shows the dynamic interface of the earlier Twitter, where panes could be slid onto and off of the screen at will, to give focus to whatever area of information is of current interest. The in-pane web view shown can be slid left to reveal the rest of the page, tapped into full-screen for dedicated viewing at a larger rendering, or slid right to reveal more of the far-left action bar. In the new Twitter shown in the second screenshot, there is no left/right sliding to make use of the iPad’s large screen. Those light grey areas forever letterbox the comparatively small stream of tweets at the center. A click on a web-link always takes over the screen to a full-screen rendering; gone are the three in-pane webpage view sizes that gave such a nice feel to the Twitter experience on the iPad. And the list goes on.

A 2011 video from Twitter, Inc. does a fairly decent job of showing off many of the features of the interface they’ve discarded (though, only the portrait orientation is demonstrated, unfortunately).

Twitter is the app I use most on my iPad. I’ve deleted version 5 and re-installed version 4.3.2, and will sit on this version for quite some time, I imagine. I am in hopes that the folks over at Twitter Inc. have been hearing the tweets of disappointment from those of us who appreciated the impressive work they put into the “old” Twitter app, and will re-consider the direction they’ve gone with version 5. It truly is a monumental step backwards.

[ It seems worth mentioning here, given some of the response tweets I’ve gotten over the weekend, that I do own Tweetbot for iPad and I have used it. It is a very nice Twitter client, my “second best” choice on the iPad, in fact, and far nicer than the new Twitter version 5. I feel, however, that its interface on the iPad is well behind that of Twitter version 4; it does not utilize the screen in as efficient a manner. That said, Tweetbot is by far my favorite iPhone twitter client, and I use it hourly. So, no, I do not want to “just use Tweetbot instead.” And, while I’m on this sidebar, I’ll mention that for the desktop and laptop, YoruFukurou is my client of choice. ]

This entry was posted in Just Rambling, Other Platform and tagged client, fail, tweetie, twitter, ui, ux. Bookmark the permalink.

2 Responses to One of the Finest iPad Apps Is No More – Thanks for the Update, Twitter