Sitting down with my morning coffee to start the day, I was greeted by a rather nice tweet from @Time. They tweeted to let us know that Touch Arcade made their list of The 50 Best Websites of 2011. 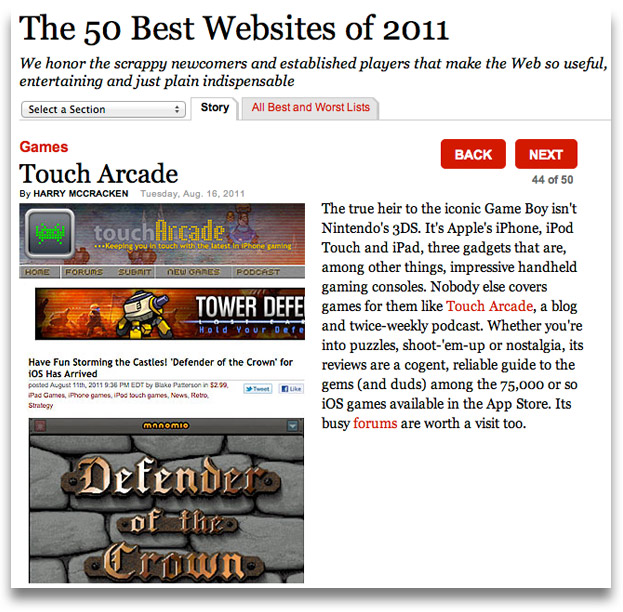 As readers may be aware, Arnold Kim and I started Touch Arcade in early 2008 to cover what we then felt would obviously be the huge iPhone gaming scene that the upcoming App Store would bring. Looking back, over three years later, we seem to have been rather on the mark with that early assumption.

We ran Touch Arcade as a two-man show for the first year or so, and then began staffing up. We currently have four full-time editors (myself included) and a handful of freelance writers who contribute regularly. The site has, so far, done better than we could have expected and we’ve got some big things in the pipeline for later this year.

I quit my day job of 10 years this past January to focus entirely on the site, and affirmation like this is an honor and really underscores the fact that it was the right decision. (It wasn’t an easy one to make, I can tell you.)

So, thank you Harry McCracken and Time. I promise we’ve no intention of slowing down.