I Have a Chip on my Shoulder

It just occurred to me that six months have passed and I’ve not posted about the new tattoo I had inked. Geek tattoo, that is — the best kind. And this, after reaching out for help from readers to choose the proper squid (TAITO says it’s a squid) to use for my Space Invaders tattoo I had inked back in ’08.

So, I was talking to my long time friend Chris Bernick (who is now the backend guy for AppShopper) and tattoos came up in the conversation. I don’t remember the specifics, but he said something that made it occur to me just how awesome it would be to get “a chip on my shoulder.” And, what better a chip to have emblazon upon my skin than the venerable 8-bit MOS Tech 6502, heart of the Atari VCS, Apple II, Commodore 64, Atari 800, and various others? 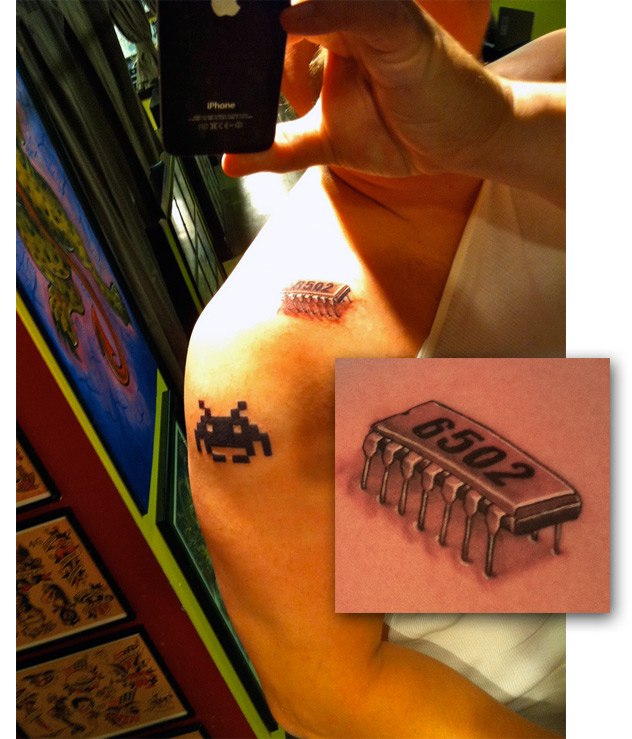 Now, despite planting the seed that sprouted into this majestic bit of body art, Chris has harshly criticized my new tattoo because of the fact that it’s supposed to be a likeness of the 6502, but sports a mere 14 pins, while the standard 6502 DIP sports 40 pins. I just felt that 40 pins seemed too complex — would require too intricate a design.

At any rate, I love it and am proud to walk the earth for the rest of my days with a most notable (8-bit) chip on my shoulder.

This entry was posted in Just Rambling and tagged body art, ink, tattoo. Bookmark the permalink.

10 Responses to I Have a Chip on my Shoulder