Long-time readers may recall that a few years ago I picked up a used Apple //c in excellent condition from eBay…and didn’t really have any place to put, here in my real-world Byte Cellar. So, I took it to my office in DC and set it up there. And there it’s lived for five years, getting frequent use as a serial terminal to the various Macs I’ve used at the day job.

Recently I’ve had to bring the //c back home from the office (much more on that, shortly…). But, in those five years, the Byte Cellar has only gotten more crowded with lovely vintage systems — there’s less space than ever in here, right now. 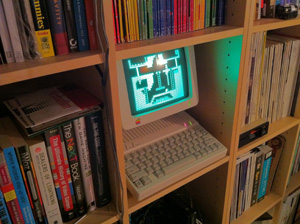 So, whatever would become of this poor little Apple //c?

Well, I’ve lately been trying to organize this basement computer room to make the most of the space available, and that’s meant repurposing some of the 24 cells that make up the far wall of the room (courtesy of IKEA) in order to add more books to the Byte Cellar “library.” As I was about to load up the last open cell with books, it occurred to me that just maybe the diminutive //c system could be wedged in there. I grabbed the //c, crossed my fingers, and — voila! It fit, monitor and all! 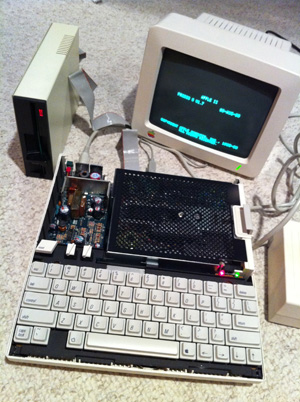 The only problem was, the Apple //c has its primary floppy drive built into the side of the unit. Once wired up, there would be no practical way to get to that drive in order to switch disks. I recalled hearing that it was possible to boot a //c from a floppy drive tied to its external floppy port — and it is, for early firmware units — but it’s a kludge and most software will fail to run this way.

In order for the //c to actually be usable, as I like all the machines in the Byte Cellar to be, I had to be able to easily switch disks. So, I decided to disconnect the internal floppy drive and wire in a half-height, Apple IIe-style, 20-pin floppy drive to the //c’s motherboard connector, allowing it to sit in the next cube over and function as the machine’s boot drive. I grabbed a drive of the right sort from eBay, and after a few minutes of fiddling with the //c’s internal bits and drilling through the lovely birch veneered particle board of the IKEA BONDE shelf system, I was in business! Everything boots like a charm from that external floppy drive. 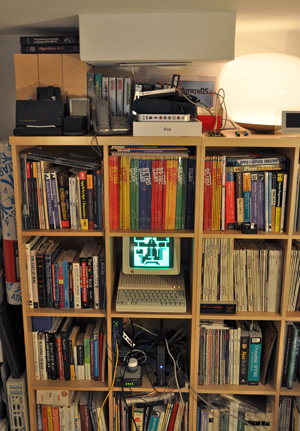 Granted, the Apple //c system probably won’t be getting a huge workout here at home, as I’ve got a rather heavily expanded Apple IIe and IIgs elsewhere in the room. (How many Apple II’s do you need in one room?) But, I’ve become rather attached to the system, having spent much time enjoyably using it as an IRC terminal in the office, daily. And, after all, the //c was my very first Apple.

Yea, I definitely think this little Apple //c is worth a cell in the bookshelf.