‘Ultima V’ on the Passport: Amazing Audio from an Apple II

Posted on January 2, 2011 by Blake Patterson 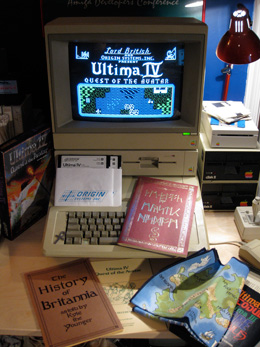 So, Ultima IV is one of my favorite games of all time. I never actually made it to the end, mind you, but it is wonderfully immersive for a game that was written on a 1MHz machine and released in 1985. And I love it. I played it — and still do, from time to time — on an Apple IIe, the original platform on which Lord British (aka Richard Garriott) wrote it, in 6502 assembly language.

One of the wonderful things about the game was its support for the Mockingboard soundcard, which is an Apple II add-on sporting two General Instruments AY-3-8913 soundchips, delivering six voices and two noise generators. (It’s the soundchip used in the Atari ST, Amstrad CPC, and ZX Spectrum 128, more or less.) In fact, some of the Ultimas supported two Mockingboards for 12 channel audio!

Now, Ultima on the Mockingboard sounds pretty wonderful, but I recently ran across a video that shows Ultima V (the next installment in the series) running on an Apple II equipped with the Passport wavetable MIDI card. Actually, it’s a two-card combo. And the results are almost certainly the best-sounding audio I’ve ever hear coming out of a II — and that’s including the IIgs.

The Ultima V music is wonderful on the Mockingboard, on the C64 version’s SID chip, and on AdLib for the PC. But they don’t compare to what the Passport on the Apple II delivers. I thought I’d share this one, as certainly I’m not the only Apple II devotee that will be amazed by the quality of this audio.

UPDATE 6/9/2013: Hmm… It seems there is some question regarding the Passport card, which is a MIDI card, vs. the earlier Mountain Computer MusicSystem, which is the two-card rig I speak of. A recent comment has called into question whether the sound in the video, which was explained as overlaid onto the video up-front, could have been generated through the Passport MIDI interface as supported by Ultima V… Anyone more in the know than I care to comment on this?

10 Responses to ‘Ultima V’ on the Passport: Amazing Audio from an Apple II