‘Virus’ vs. ‘Zarch’ — A Look at Two Braben Classics 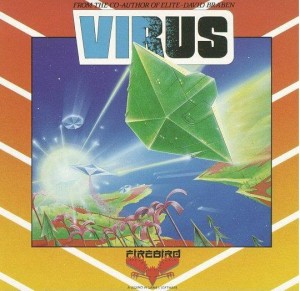 I’ve long considered Virus one of my very favorite videogames. Developed by David Braben (whose latest is Kinectimals) and published for the Amiga, Atari ST, and PC in 1988 by Firebird, Virus was one of the first filled-vector 3D games ever made.

Virus puts you in control of a flying craft with the goal of defending Earth from an invading alien force that is spreading a deadly virus throughout the planet. Your craft, armed with cannons and missiles, flies over the varied landscape — all rendered in impressive (for the time) 3D — seeking out and destroying the various types of enemy ships. The experiencing of piloting your craft has something of a low-gravity, Lunar Lander-like feel to it. Points are gained at the end of each round of play for the percentage of uninfected land on the level map. 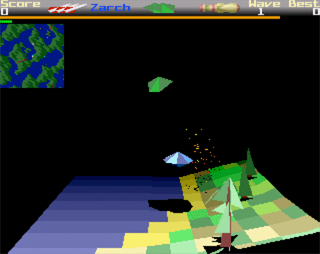 The controls in Virus are particularly interesting. The core control system is mouse-based and would be quite difficult to describe in words. When I first tried the game on my Amiga 2000 in the late ’80s, it felt like the mouse controls must be broken, and I quickly gave up on them and switched to the backup, mediocre keyboard-based controls. But, it was after seeing how the controls were being so highly praised on FidoNET that I sat down, determined to figure it all out. And figure them out, I did, only to discover a highly sensitive and amazing control system that delivers almost eerily precise control of your craft. It just takes some time to learn.

A few years after discovering Virus, I came to understand that it is an adaptation of Braben’s Zarch, released a year earlier for the Acorn Archimedes, a distinctly British RISC-based platform rather more powerful than the more mainstream machines for which the dialed-down Virus was released. In fact, a sort-of “light” version of Zarch called Lander came bundled with the Archimedes to show off it’s capabilities. (Incidentally, the Archimedes is the machine for which Acorn created the ARM RISC architecture that lives on today in the heart of the iPhone, the iPad, and many other electronic devices. It is presently the most widely used 32-bit processor architecture in the world.)

When I learned about Zarch, I searched, found, and purchased an Acorn Archimedes A5000 from a collector in Florida, so that I could experience the game in its best form, first hand. With a little splicing and jiggering and a battery fix, I got the machine up and running. It’s quite a system, but there are certainly very few of them drawing power here in the States.

Once I had Zarch loaded, it was plainly apparent that it offers the superior gameplay experience. Not only does it run at a higher resolution and in 256 colors (versus 16 for Virus), but it features a much higher framerate and more sophisticated lighting and shading effects than the latter release. But, all that said, Virus is still an excellent game (and a good bit easier to track down than it’s forebear) that I’d encourage everyone reading this to seek out.

A rather notable difference there! I think we yanks missed out on some real computing goodness with the lack of any real Acorn presence in the States, back in the day. But then, luckily, emulation brings the opportunity to form a late acquaintance with the platform. And, if we’re lucky, perhaps Braben’s Frontier Developments will bring a version to the masses through, oh…say, iOS. It sure looks good running on the iPhone under Amiga emulation…

Now, go and track one of these classics down and see what you’ve been missing.

This entry was posted in Acorn. Bookmark the permalink.

14 Responses to ‘Virus’ vs. ‘Zarch’ — A Look at Two Braben Classics