The Soul of a New 16-bit Atari Micro [Updated]

Some of you out there have likely read Tracy Kidder’s Pulitzer Prize-winning book The Soul of a New Machine, an inside look at the experiences of a group of Data General engineers in creating a new minicomputer back in the ’70s. I only discovered this book, myself, four or five years ago. It’s an extremely enjoyable read that set me searching for similar, up-close looks at the creation stories of some of the microcomputers that I know and loved in my youth.

I’ve managed to find a few such titles that I’ve enjoyed greatly, including: 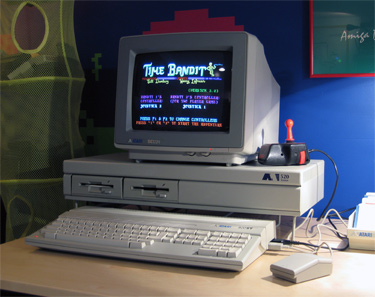 Some of these are out of print and required a little digging to get my hands on, but all are well worth a read. These books touch on many of the systems that I spent real time with over the years, but conspicuously absent is a look at the creation of the Atari ST, a machine with which I spent most of my free time during ’86 and ’87. I’ve never seen the saga of this fast-tracked, 16-bit Atari told in any detail. That is, until I ran across a series of posts on the unassuming blog of a man who was a member of the Atari ST design team.

Landon Dyer ended up working for Atari in the early ’80s thanks to entering an Atari-sponsored programming contest in which he submitted an assembly-based Centipede clone written on his Atari 400 hooked to a black and white TV. (The author of Atari’s “official” Centipede cartridge called Dyer’s version better than his own.) Flash forward a few years — Jack Tramiel buys Atari and Dyer finds himself one of the lucky few not laid off, and on the Atari ST team.

His two-part blog post gives some very nice details regarding just what was going on behind closed doors while the Atari ST was in the oven.

Before the ST hardware started to work, we had to use existing 68000-based systems for cross development. The graphics guys had Apple Lisas that were running CP/M-68K; the Lisas had nice bitmap displays which we used as “practice” STs. The disks on these machines took forever to come back after a crash (tens of minutes). For some reason the boot code on these machines had been written to display a bitmap of a fish. You’d hear a mutter or curse from down the hall (crash), then the creaky footsteps of someone walking around, cooling their heels and waiting for their “God damned” Lisa Profile drives to boot, then a triumphant yell “CarpDOS!” and typing sounds.

Don’t miss this very enjoyable read or Dyer’s blog, DadHacker (which has been online since mid-2002), chocked full of excellent geek content. Hats off, Landon.