When I was in college as a CS major I spent a great deal of time in the Sun lab. It was filled with, unsurprisingly, various Sun workstations (and even a few Tatung Sun clones). But over in the corner was something special: a MasPar fronted by a Vax. The MasPar is a massively parallel SIMD computer featuring a large number of CPU cores. The unit at Christopher Newport University, where I graduated, contained 1024 cross-linked cores in a toroid configuration (though the cabinet would accomodate 2^14 cores — 16,384). Who would’ve thought that in 2010 you could put a massively parallel system on your desk…in the form of an Amiga?

A-EON started teasing the Amiga community not long ago with hints at a forthcoming new workstation capable of running AmigaOS 4.1. Recently the company ended the torment and announced the AmigaOne X1000, named in tribute to the Amiga 1000, the first Amiga, which debuted 25 years ago in 1985.

What really set the original Amiga 1000 apart from the comparatively weak computers of the day, aside from its light-weight, multitasking operating system, was the set of custom chips that allowed the machine to deliver stunning graphics, full-screen animation, and high-quality, sampled, stereo audio — firsts, on all fronts. Today, every PC has “custom chips” driving their graphics and audio. Any modern Amiga utilizes such technologies as a matter of course. What sets the AmigaOne X1000 apart from the rest is its use of customizable co-processors. 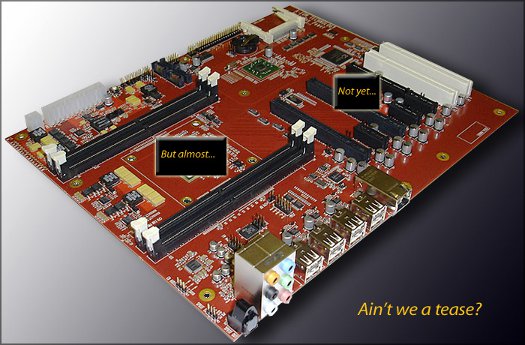 A-EON’s forthcoming machine features a dual-core PowerPC on a custom motherboard known as “Nemo” (AmigaOS 4 is PowerPC-based) in a custom case featuring the classic Boing! ball, but that’s not so very interesting. Of far more note is the unit’s co-processor. The engineers at A-EON decided to utilize an XMOS Xcore processor, which they have dubbed “Xena,” in the design of this latest Amiga. As Wikipedia describes the device,

It is a 32-bit quad-core processor, where each core runs up to 8 concurrent threads. It was available as of Autumn 2008 running at 400 MHz. Each thread can run at up to 100 MHz; four threads follow each other through the pipeline, resulting in a top speed of 1.6 GIPS for four cores if 16 threads are running. The XS1-G4 is a distributed memory multi core processor, requiring the end user and compiler to deal with data distribution. When more than 4 threads execute, the 400 MIPS of each core is equally distributed over all active threads. This allows the use of extra threads in order to hide latency. 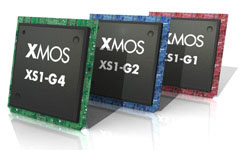 A single unit sounds rather interesting from an architectural standpoint, but given the parallel nature of this architecture, additional cores can be chained together to deliver phenomenal computing power — reference boards have chained together 256 cores, delivering a theoretical 102,400 MIPS. Chaining together more of these cores can be done by way of the AmigaOne X1000’s Xorro slot, a PCIe x8 form factor that provides access to Xena’s 64 programmable I/O lines.

The dual-core PowerPC (reference systems are being run at 1.6GHz, but the specific chip has net yet been revealed) already puts the AmigaOne X1000 far beyond any other Amiga — such as the SAM440ep-Flex that I picked up recently — in terms of performance, but it’s really the potential of Xena that makes this system exciting as well as notably more powerful, in theory, than today’s high-end Macs and PCs.

Specs of the AmigaOne X1000 as listed by A-EON:

The AmigaOne X1000 is set to arrive sometime before summer at a cost less than that of the original Amiga 1000 which, in ’80s dollars, retailed for $1295. (Developer units will be available prior to that at a higher price-point.) Will I be buying one? I might let the dev units pass me by but, given the fun I’ve had with my SAMiga running AmigaOS 4.1 even with the rather limited free time in my life, I can say: definitely. (After I get the Minimig core installed on my C-One, that will make the AmigaOne X1000 the sixth Amiga in my collection.)

What can I say? Only Amiga makes it possible! I can’t wait to get my hands on one.