Right Now, I’m All About the Amiga (Again) 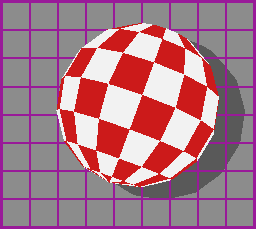 I sold it not too long after, but that was just because of a youthful brainfart. In the following years I grabbed a number of other Amigas and enjoyed the innovation that they offered. The Amiga was so far ahead of its time it was ridiculous. And Commodore management along with good ole’ Irving Gould were quite inept enough to drive the company to bankruptcy in 1994. (Read about it.) The tech world’s loss, it was.

And, so, the Amiga has always had a special place in my heart. I’ve long owned an Amiga 2000 and a towered Amiga 1200 ‘060, both of which are great for games and demos, but as I have no modern graphics card for either, they’ve been nothing close to “serious computers” to me. But I’ve certainly had fun with them.

As both of my regular readers surely know, I spend a fair bit of time scanning eBay’s vintage computer areas looking for must-haves. A few weeks back, while browsing the site, I saw a near-mint Amiga 1000. I’d long wanted a really clean A1000 to add to my collection, but they’re really not somehing you come across. (I purchased a used A1000 back in 1994 — 15 year ago — and it looked like it had been found in a bog.) So, I laid down $350 or so and it became mine. And it turned out to be an excellent and rare find. It really is like new. 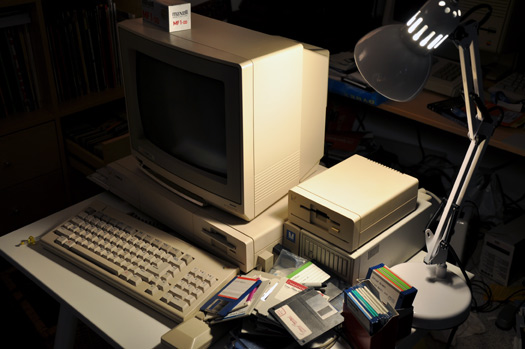 This got me into the Amiga frame of mind in a way I’ve not been in more than 20 years, give or take. I’ve been spending lots of time in the Amiga.org and AmigaWorld.net forums lately, and it was there that I learned about the SAMiga. That is to say, the AMCC 440EP SoC-based PowerPC motherboards manufactured in Italy and capable of running PowerPC Linux and, more interestingly, AmigaOS v4.1.

Developed by ACubed Systems, the SAM440ep boards are rather modest in power as compared to modern Macs and PCs, but are the only computers currently in production that are capable of running the current Amiga operating system, AmigaOS 4.1. 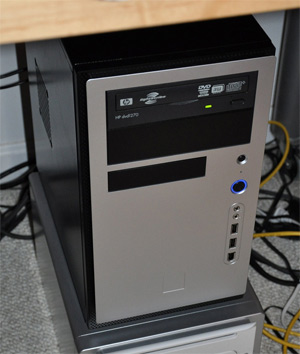 In recent years I had toyed with the idea of adding a PCI bus-board to my towered Amiga 1200 ‘060 in order to be able to run the latest Amiga operating system with a proper, modern video card, but the cost and somewhat cumbersome overall nature of such a setup kept me from going down that road. And, a few years back I even spent a full day trying to track down a reasonably priced AmigaOne system on which to do the modern Amiga thing (right after production of those boards had ceased), but it didn’t pan out.

But now, here I am, the envy of many a long-time Amiga faithful, with the latest Amiga iron. But, as I mentioned, not such powerful iron as compared to modern machines. The board I purchased (from AmigaKit) is the SAM440ep-Flex based around a PowerPC 440 CPU running at 733MHz, overclocked (quite safely, in the factory) from 667MHz. That’s roughly equivalent to a typical 700MHz G3, I gather. (Note, the AmigaOne boards used actual G3s and G4s.) Not a powerhouse, but let’s remember that the first Amiga ran a preemptive multitasking operating system in 256K of RAM on a 7.16MHz 16/32-bit 68000 CPU. I’ve fitted the system with 512MB of RAM and a PCI Radeon 9250 128MB graphics card, the most advanced card currently supported by AmigaOS 4.1.

It’s been a lot of fun getting the SAMiga up and running. It’s certainly not a process without its hitches, but in a way that’s part of the fun. You see, the thing that pushed me over the line into getting the new Amiga was one particular paragraph at the end of Jeremy Reimer’s ArsTechnica review of AmigaOS 4.1.

Whatever the ultimate fate of AmigaOS, it has been a privilege and a joy to use it. I still use my AmigaOne on a daily basis, and consider it my “fun computer.” Whenever Windows or OS X annoys me, it’s right there, fast and friendly and accessible. It feels like a personal computer in ways that computers haven’t felt like in over a decade. 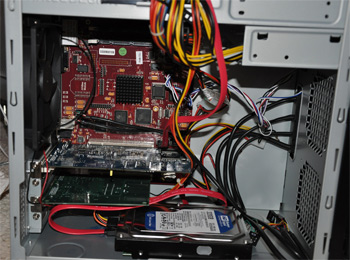 The appeal of a modern computer that feels like a “personal computer” was too much to resist. After all, when the era of “personal computers” dried up, so did that magic that was learning the ins and outs of a system that you had chosen to truly make part of your life. Back then most every computer was its own situation — OS, hardware — it was all proprietary and specific to the box. Things were a lot more fun way back when, and my new SAMiga is giving me a lovely, daily fix of “how things used to be.”

It’s certainly not for everyone, but if this little adventure gives you a tingle, maybe you too should make an Amiga part of your life.

Oh, and this entire post was created using my SAMiga. :-)

9 Responses to Right Now, I’m All About the Amiga (Again)