It Was Apple Garamond That Sold Me

Posted on November 4, 2007 by Blake Patterson

Apple marketing has long done a number on me. And not just in these flashy days of iPod “shadow dancers” and all that hipness. No, even back in the mid-’80s days of their classy, perhaps conservative product ads featuring the elegant Apple Garamond font, I was held in thrall. 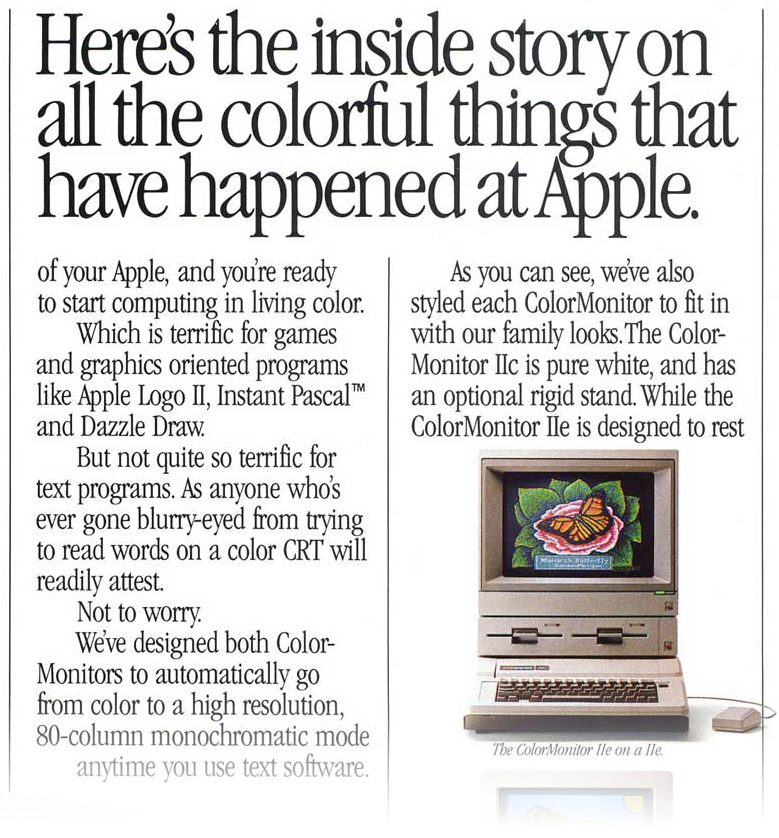 I purchased what I believe was the first Amiga 1000 sold in Virginia, way back in October 1985. The Amiga was amazing, but it did lack software for the first (many) months of its existence. I was loving the Amiga but lamenting the dearth of software when, it seems, I was romanced by Apple’s elegant ads for their new, late-’85 Apple II offerings, consisting of new composite screens for the IIe and //c featuring a clear 80-column “mono mode,” the UniDisk 3.5 disk drive, and the Mac-like Quark Catalyst desktop interface that made the II shine anew. Yes, that Apple ad from the December 1985 A+ Magazine (shown in part above) was the main force that prompted me to sell the Amiga and go back to the 8-bit Apple II. (I was a //c user prior to the Amiga.) I grabbed an enhanced IIe, fully loaded. 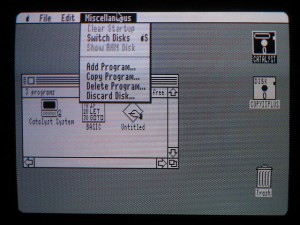 A smaller part of what pushed me back to the II, I believe, was the Apple dealer where I hung out frequently. It was just a really great place located in Williamsburg, Virginia called Next Generation Computers. I’ve long loved the historic colonial atmosphere of Williamsburg, and at that store it somehow meshed with the elegant stylings of Apple’s packaging and ads. The two together was a proposition I could not resist. And so, prompted by the ad above, I sold the Amiga and headed up to Next Generation to become an Apple II user once again.

I thought I would share this little twist in my computing history. Who says marketing style doesn’t affect the technical, the savvy? Going from Amiga back to the 8-bit Apple II.

I still love the II and the early Macintosh, and it is in part because of a typeface.

[ This post was updated — images and links — in February 2015. Motivation for this was Chris Phin’s recent Macworld piece, entitled “Think Retro: Apple’s fonts have always been as classy as its products.” ]

2 Responses to It Was Apple Garamond That Sold Me