Posted on September 14, 2007 by Blake Patterson 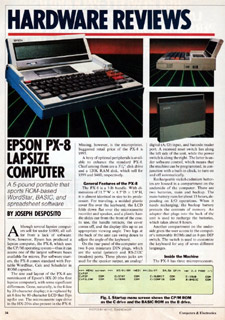 I listened to a good number of Earl Evans’ Retrobits podcasts while on my recent vacation to the Outer Banks. (Earl has even seen fit to make mention of Byte Cellar in a few of his shows.) While all I’ve heard so far have been rather engrossing, one topic particularly caught my interest. Earl, who worked for Epson years ago, has acquired a CP/M-based Epson PX-8 (aka “Geneva”) laptop – one of the first out there, and has been having much fun with it.

What I thought was particularly nifty is his effort to preserve the data on piles of PX-8 floppies that found their way to him. He was able to extract the CP/M applications off of almost every disk and is actually working on a hardware project to emulate an Epson PF-10 3.5″ floppy drive so that these apps can be run directly from a SD card. An awesome effort in every regard.

When listening to Earl expound the virtues of his PX-8, a mental image of the laptop sprang instantly to mind. When trying to determine just why that was, I remembered picking up a copy of a magazine years and years ago that featured a review of what I felt sure was this unit as well as cover placement. After a bit of digging, I located the magazine in question, a fairly battered September 1984 issue of Computers & Electronics, and sure enough – the PX-8 is indeed the unit I remembered. As far as I know it’s the only issue of this magazine I ever picked up and strangely I can recall the obscure, mom and pops drug store where the then-12-year-old me purchased it.

Inspired by Earl’s effort, I felt compelled to contribute similarly, if to a far lesser extent, to this cause. I have scanned in the PX-8-related pages of the magazine and placed them online for Earl and others who might share an interest.

As a sidenote, Earl informed me that an outfit in Colorado called Star Technology is actually selling brand new Epson PX-8s for $79. There’s really nothing like getting to experience that first unpacking moment with a retro machine….