Apple //c as a Dumb Terminal to my Mac mini 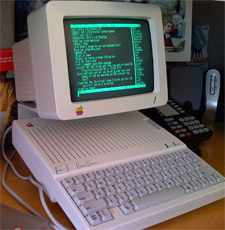 Several months ago – maybe more like a year or two ago now, I purchased an Apple //c in mint condition and didn’t really have a plan for just where I would house this little treasure. You see, my second computer was an Apple //c (after my TI-99/4A), puchased in April 1984. It was a great experience owning and using that machine at the age of 12. I finally sold it and moved to the Mac, and then Amiga, and then Apple II again, and then… Well, let’s not get carried away. This story is about the //c – the //c I recently purchased.

So the //c has been in my office since I purchased it. About two years now, I suppose. I’ve booted it seldom enough times to count on one hand – a sad situation. Well, I recently encountered a story that gave me a reason to use my //c a little more frequently – as in every day. It seems that Paul Weinstein put an Apple //c into his office setting, tied to his Mac mini via serial link, and proceeded to use the //c as a text terminal for IRC chatting. An avid IRC user myself, with a Mac mini and Apple //c already in my office, I had little choice but to folllow his lead. The result is most satisfying.

Sitting next to my office workstation setup is an Apple //c, complete with a 9″ monochrome Apple Monitor //c and stand (all beautifully designed by frog design inc.) serving full time, 8-hour per workday duty as a serial terminal to my my Mac mini. A custom 5-pin DIN (//c end) to 8-pin mini-DIN (Mac style) null modem cable of my own (sloppy) creation ties the //c to a Keyspan dual USB-serial adapter plugged into my mini. The //c is running Modem MGR, a popular and flexible terminal application (three 143K floppies in size) that is providing VT220 emulation. 9600bps seems the fastest that the //c can handle in this configuration – slow, but adequate for the role of a text terminal. (It actually seems pretty fast given that 1200bps is the fastest speed at which I’ve ever used an Apple II terminal emulator – on my IIe with internal Prometheus ProModem 1200A back in 1986.)

The //c spends basically all of its time serving as an IRC chat terminal, displaying a shell session of either irssi or Rhapsody, both terminal-based IRC clients, running on my remote Linux server by way of a secure shell connection. It’s a rather abstracted approach, but it’s great to twiddle the //c’s keys in a meaningful way every workday.

I’m rather enjoying the setup, and it’s certainly generated many a raised eyebrow and curious look as folks pass by my office. At any rate, I hope you’ve enjoyed my tale and my photo gallery chronicling this project.

This entry was posted in Apple II, Serial Terminal. Bookmark the permalink.