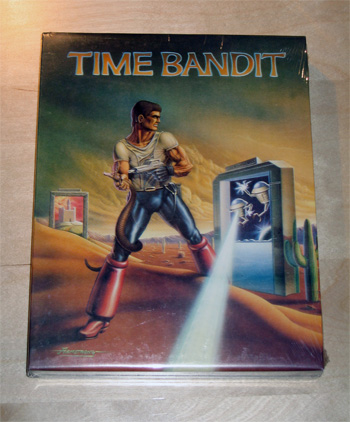 One of the more exciting machines I’ve owned was the Atari 520ST. I moved from an Apple IIe to this new 16-bit graphics machine in late 1986. The ST was fast, with its 8MHz Motorola 68000 CPU, and provided impressive visuals with its then-impressive 512 color palette. The sound wasn’t too bad either. It was great fun going down to the local Games ‘n’ Gadgets and buying new titles for this machine. But, of all the game I ever owned for the Atari ST, my favorite was easily Time Bandit, published by MichTron and created by Bill Dunlevy and Harry Lafnear.

Time Bandit is basically a “Gauntlet style” (thought it preceeded Gauntlet by two years), top-down perspective shooter where you, the Time Bandit, travel through time among 16 different worlds, all but one of which each have 16 different levels, searching for various artifacts along the way. Unexpected in this type of action-adventure, arcade-style game was the inclusion of the occasional text-based interaction with characters in the game by way of a simple text parser, adding a deeper, problem-solving aspect to the game experience. The variety that the various worlds and levels and character interaction provided was enormous, instilling in the player a sense of vastness to the game world. Time Bandit was truly a departure from other games of the day. 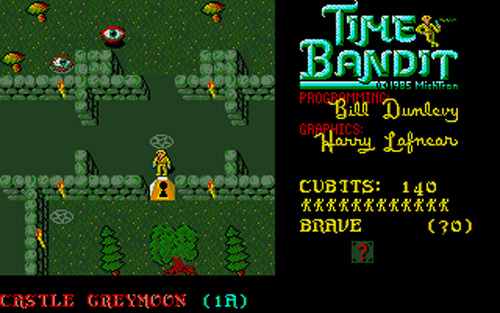 Atari Legend has published an interview with Harry Lafnear who created the graphics for Time Bandit as well as a variety of other games for the Atari and other platforms. Within, the game’s co-creator tells the tale of Time Bandit‘s evolution from its first incarnation on the Tandy TRS-80 Model I, followed by a port to the Tandy CoCo which brought color graphics to the game, and then on to the 8-color, pseudo-PC-compatible Sanyo MBC-55x, arriving at its best incarnation, on the Atari ST, and finally from there its port to the Amiga and PC. The interview also provides a rare glimpse at the interworkings and eventual demise of MichTron, the company behind the game, that many 16-bit gamers of the 80’s will remember with fondness.

The Atari Legend also has a details page online, complete with screenshots and trivia. Have a look.

In the 80’s I had Time Bandit for both the Amiga and Atari ST, but sold it along with those systems years ago. After getting my hands on a new Amiga 2000 [note the Atari ST Time Bandit manual in the background!] a few years ago, I happily managed to find a copy of the Amiga Time Bandit after months of searching; however, I still prefer the Atari ST version because of several subtle differences. I’m sure one day I will put together an ST system, and largely to reexperience this particular title in its “purest” form. [ Edit: I did this! ]

UPDATE: I have scanned the Time Bandit instruction pamphlet and placed it online as a PDF document, for those interested.

UPDATE: I’ve searched and searched over the years for screenshots of Time Bandit coded for the unique PC-compatibleish Sanyo MBC-550 computer, with then-impressive 8-color display. I finally found a few, as well as screenshots of the TRS-80 Model I original. Have a look, below.

UPDATE: I’ve discovered that the screenshots I had been hosting, labelled as the Sanyo MBC-550 version were, in fact, Photoshop fan renderings of the CoCo screens, made to show an improvement over the CoCo versions in order to loosely represent the Sanyo version of the game. I’ve since found actual Sanyo MBC-550 screenshots and have included them at the bottom of the screenshot list.

This entry was posted in Atari, Gaming. Bookmark the permalink.