Posted on November 2, 2004 by Blake Patterson 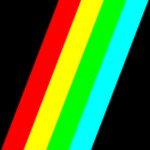 Last night I happened across quite the piece of nostalgic computing goodness. Over at b3ta.com, MJ Hibbert and Rob Manuel have put together a flash-based music video entitled “Hey Hey 16K”, which is a surprisingly catchy tribute to the yesteryear gaming scene of the Sinclair ZX Spectrum. The Spectrum was one of the most popular European home computers of the ’80s. Likely most Americans are almost entirely unfamiliar with the platform—almost everything I know about the ZX Spectrum has come from Retro Gaming magazine, wherein the Spectrum is the main platform focus. (In fact, a reader recently (and justifiably) called me on my apparent lack of Spectrum appreciation, and I am trying hard to turn that around.)

Very amusing stuff. Have a listen.

What does that get you today?

You need more than that for a letter

Old skool rampaks are much better…

This entry was posted in ZX Spectrum. Bookmark the permalink.