Four Colors Into Sixteen: Terminal Innovation on the Atari ST 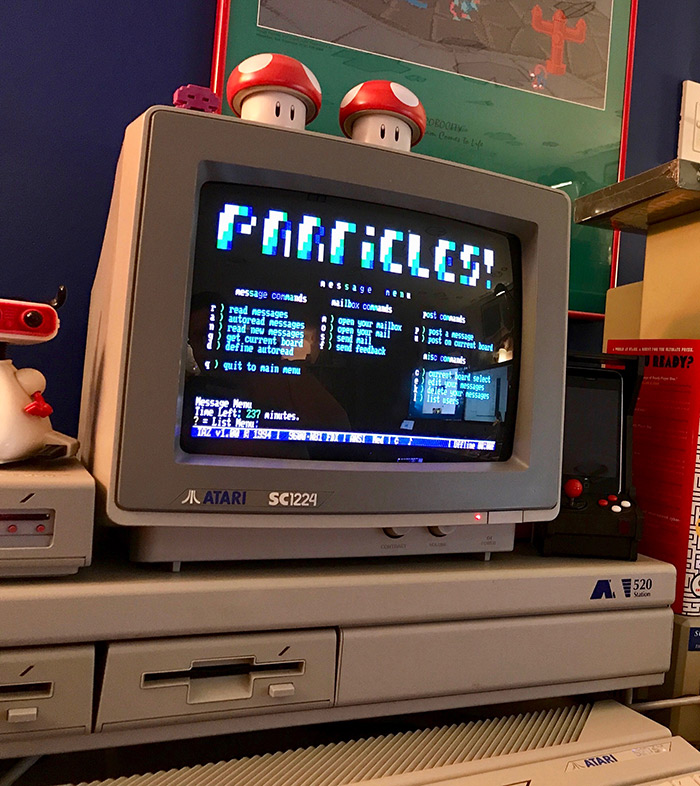 I’ve been spending a lot of time in the growing telnet BBS world lately and it’s really been a blast. I’ve been “dialing” in to my favorite BBSs by way of Paul Rickard’s WiFi232 Internet Modems (which I covered in a recent post). So far I’ve used my WiFi232s on five different systems. Among them is the Atari 520ST.

I purchased my first Atari ST back in the fall of 1986. Shortly thereafter I added an Atari SX212 1200-baud modem (my second modem, after the Prometheus ProModem 1200A on an Apple IIe) to the setup. The only terminal program I had ever used on the ST was ST Talk, a rather basic VT-52 terminal emulator program. When I reached for my 520ST to use with the WiFi232, I figured there was probably a more full-featured ST terminal program out there, so I did a YouTube search for people using the Atari ST as a serial terminal and found someone demonstrating the WiFi232 using a program called TAZ. What caught my attention was the fact that it supported ANSI emulation (with the IBM extended character set) and, more impressively, seemed to do so in 16 colors in the ST’s Medium Resolution mode. Medium Resolution on the ST is 640×200 pixels, which can display 80 column of text, but in only four colors (out of a palette of 512 colors).

So, how was it displaying 16 colors?

The Atari ST can display 16 colors onscreen in Low Resolution mode, which is 320×200 pixels, but not in Medium Resolution. So, I left a comment asking the poster what was going on. He responded, saying that the 16-color display was achieved using dithering.

Well, it didn’t look dithered; it looked rather sharp. So, I downloaded TAZ, put it on the SD card that is my 520ST’s floppy library (thanks HxC2001) and fired it up. As soon as it loaded it became clear what the developers had done here, and it was impressive. I logged into an ANSI graphics-heavy BBS and was blown away by the accurate and colorful ANSI display.

TAZ, by Neat n Nifty software circa 1994, does not use dithering in the traditional sense to achieve 16 colors. But it does use dithering of a sort — it uses what you could call temporal dithering. TAZ alternates two different palettes every frame. That means that, on a 60Hz display, TAZ‘s 16-color terminal screen is effectively 30Hz. You would think that this would introduce substantial display flicker — and you’d be right! It flickers notably but, amid the flicker, what is achieved is a very usable, 16-color ANSI terminal running on a machine limited to just four colors onscreen at a time. And the font the developers chose is particularly nice, as well.

As you can see in this quick and dirty video that illustrates the technique, white text, for instance, is generated by an alternating shade of red and blue, both colors carrying some level of green. As those colors swap in and out 60 times a second, your eye is tricked into seeing the average of the two colors. Yellow is formed by swapping out shades of red and green, and so forth. Pause the video a few times during the high framerate sections to see what’s happening more clearly.

I have seen similar approaches used in a few other places over the years, the first being the early Atari ST game, Megaroids, an Asteroids clone. In Medium Resolution mode it does a color swap every frame to smooth out the details of the asteroids and to provide a degree of anti-aliasing for the player’s ship. The second example I encountered was also on the Atari ST, in a paint program called Quantum Paint which achieves up to 4096 colors onscreen by swapping palettes every frame in Low Resolution, 16-color mode. Over the years I have run across several scenedemos that achieved effectively higher color depths using this technique, as well.

Of the systems I’ve used with the WiFi232 units, my Amiga 1000 with its true 16-color, 80-column screenmode is probably the most capable machine for color BBSing, but the cleverness of TAZ and the quick startup time of the Atari with its HxC2001 has made the 520ST my go-to BBS machine at the house, for the time being.

A big part of the enjoyment that I experience using these vintage systems has to do with what they are able to achieve with such extremely limited resources as compared to the technology of today. Seeing a system actually pushed beyond its set capabilities, so to speak, is an incredibly satisfying thing.

This entry was posted in Atari, BBS, Serial Terminal. Bookmark the permalink.

6 Responses to Four Colors Into Sixteen: Terminal Innovation on the Atari ST