Posted on December 5, 2016 by Blake Patterson 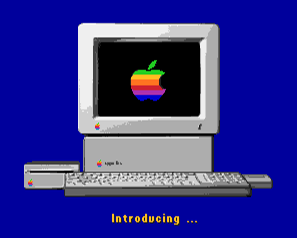 It was a Saturday morning in September when we saw the Apple IIgs for the first time. By “we,” I mean those of us who headed to local authorized Apple dealers across the country (which for me was Chaney Computer in Newport News, VA) to get some hands-on time with Apple’s new II during that launch-day event 30 years ago, back in 1986. But the hands-on session came only after the machine was (physically) unveiled and the Apple IIgs Sales Demo was booted up and presented to the crowd in attendance.

Apple planned an event for participating dealers that centered around a IIgs system equipped with two 3.5-inch floppy drives, the 12-inch AppleColor RGB Monitor, a 1MB RAM card, and a decent set of speakers. The main event was the two-disk Sales Demo which was written by Tom Lichty and Tom Crosely in order to let the IIgs show off its talents.

After the black cloth was thrown aside revealing the platinum-hued system underneath (and after the “oohs” and “aahs” had abated), the IIgs was switched on, the drives began pulling in data, and suddenly the room was filled with the music of a jazz saxophone while colorful shapes danced about the screen. The quality of that sax and the instruments that began to accompany it was shocking to everyone present; the 32-second piece was digitized 8-bit audio (hence the need for the 1MB RAM expansion board) and very few other systems could pull that off. This was not something that most in attendance had experienced before. Apple’s original plan had been to use synthesized instruments to play the intro piece, but the demo team was unable to get things sounding of the level of quality demanded by this important demo in the allotted amount of time. It was an impressive demo of the GS’s Ensoniq sound chip.

While this year marks the 30th birthday of the Apple IIgs, what really got me thinking about this demo was a post I wrote a few weeks back, concerning the Atari ST, in which I mentioned the Apple IIgs Sales Demo. In writing that piece, I went looking online and was surprised to find no full, proper video of this demo that made such an impression on me and at least a few of you readers out there. Troubled by this, I decided to properly record the demo and upload the video so that it’s out there for anyone searching for this glimpse of a memorable piece of the Apple IIgs‘ infancy.

This entry was posted in Apple II, Down Memory Lane. Bookmark the permalink.