I have written a number of posts over the years about the Amiga 1000 computer, the first model in the Amiga line, which was released by Commodore in late 1985. I purchased my first Amiga 1000 in October 1985 from Chaney Computer in Newport News, VA (and I have reason to believe it was the first Amiga sold in the state).

When I got home that day with this computer that seemed to actually be magical (it’s hard to convey how dramatically more capable in all regards the Amiga 1000 was than all other computers of the day), I quickly unpacked it, set it up on my desk, and threw the box in the closet. I spent the next several days sitting in front of that computer, having my mind blown time and again by the graphics, the sound, and the multitasking. School (8th grade) was agony at the time, keeping me away from that amazing machine for most of the day. I remember those days vividly.

About a week after bringing the system home, I opened up my closet and pulled out the box to read over it. That’s when I saw something that surprised me. In small text on the side of the box the Amiga was referred to as the “Amiga 1000.” I had read (and re-read) several magazines covering the Amiga in my anticipation of its release, and nowhere had I seen the computer referred to with a model number. I remember then wondering how long it would be before another model of the Amiga was released; the “1000” made the Amiga seem more of a line of computers rather than a one-off. And, of course, Amiga was a line, with the 500 and 2000 replacing the 1000 in 1987 as the first expansion of said line. 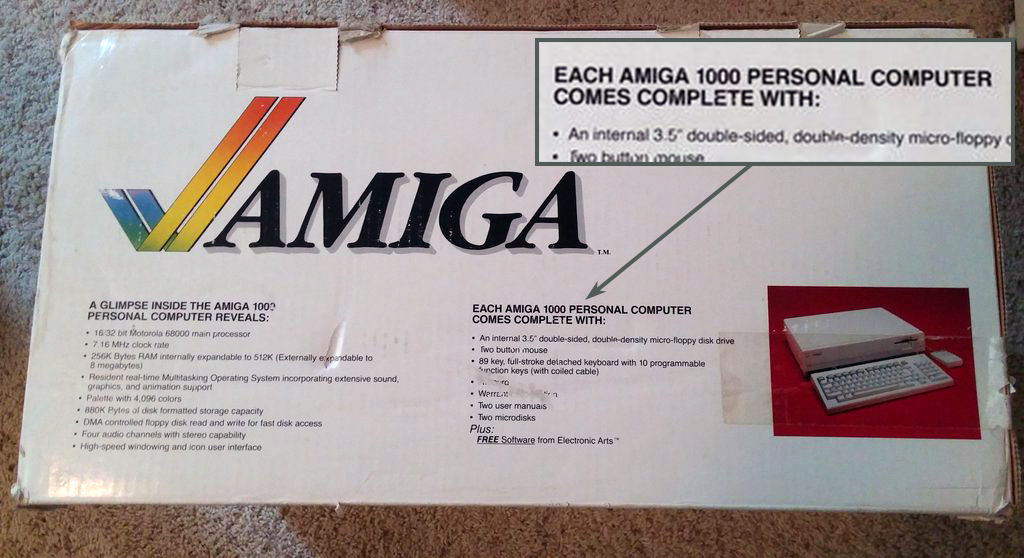 The reason I am laying all of this out in a post is that I’ve seen it explained, in a number of places on the internet detailing Amiga history, that in 1985 the “Amiga” computer was released and in 1987 when the Amiga 500 and 2000 came to market, Commodore then dubbed the original machine “Amiga 1000.” Several recent articles marking the Amiga’s 30th birthday propagate this fallacy further. But fallacy, it is! I remember reading the text on that box back in late 1985.

Commodore certainly did not emphasize (or even mention?) the model number in early advertising and promo media, and the periodicals of the day likewise referred to the computer as simply the “Amiga.” However, despite the fact that only two small blocks of text on the side of the box identify the model number, the original Amiga was clearly the “Amiga 1000” from the get-go. And, thanks to a few photos that @freakin_frankie posted of his recent Amiga 1000 (in original box) acquisition, I can share the proof with any doubters out there. (I have searched on numerous occasions but never found a photo of the side of the box!)

I believe the Amiga to be the platform that I have most enjoyed throughout the decades that I’ve been an avid computing hobbyist, and that oft-repeated bit of misinformation has long been stuck in my craw. I suppose it’s because I was there, so to speak, from day one.

So, now you know.

This entry was posted in Amiga, Down Memory Lane and tagged 68000, 80s, Amiga, Commodore. Bookmark the permalink.