The Apple //c Makes It to the Office…Again 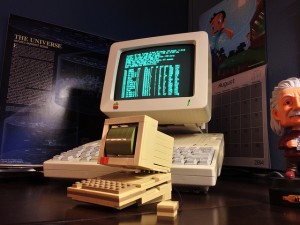 After three years of working for myself at home, I’ve returned to the world of enterprise web development. I’m back in an office these days (starting this past December, actually), working as the Senior Front End Developer for the NCTA in the district. I’ve been here about eight months and, so, it felt like it was time to transplant my Apple //c to the new office.

I acquired this //c back in 2005 with the intention of putting it in my office, then at the AFL-CIO. I had a lot of fun with it there, and when I left that organization, I brought it home and set it up in my basement office, and there it has lived these three and a half years. The series of links that follows covers my past adventures with this //c:

And, now, the Apple //c occupies a corner of my desktop in DC, the oldest computer in the building, certainly. I put together a quick little video of the transport and setup of the //c and its peripherals for those who may be interested.

This //c is still in very good shape, though it has yellowed a bit during its stay at home in “the Byte Cellar,” which seems a little odd to me as it’s quite dark down there (though, indeed, yellowing isn’t caused only by light). At any rate, the 30 year old Apple //c system is one of the loveliest works of industrial design ever created, and it’s nice to have it sitting here, ready to boot up programs, help out as a serial terminal, and simply be a conversation piece.