Siri and Eliza Have a Conversation

Posted on September 17, 2013 by Blake Patterson 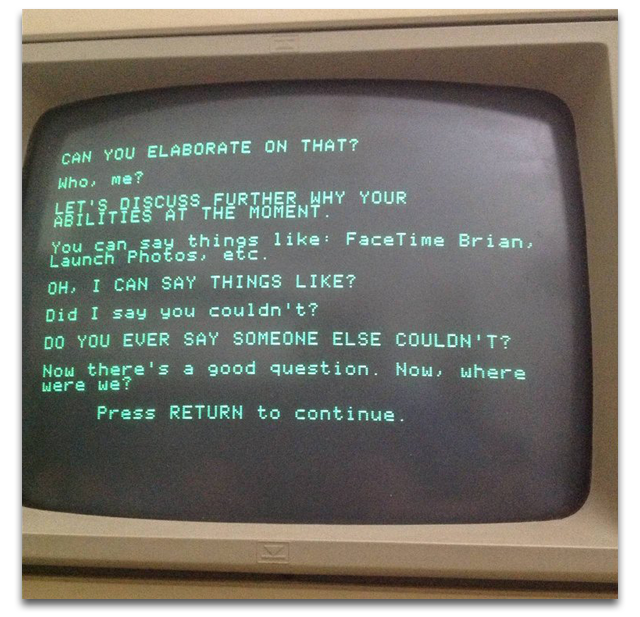 Eliza is an early computer program that served as an experiment in natural language processing. It was written at MIT by Joseph Weizenbaum in the mid-’60s and is best known as a simulation of a Rogerian psychotherapist. Siri, perhaps better known in today’s world, is a natural language personal digital assistant for iOS devices, released by Apple in 2011 as part of iOS 5.

This morning, I happened across a reddit post by user ReddInternet, showing Siri and Eliza (running on an Apple //e) engaged in a back and forth conversation. It is an amusing thing to behold, and I thought I would share it with readers. The poster drew inspiration from an earlier, similar exercise carried out by the father of Karateka, Jordan Mechner.

As it happens, my first experience with Eliza was through her inclusion in Electronic Arts’ Software Golden Oldies: Volume 1 collection, which was one of the first commercial packages available for the Amiga 1000, both of which I purchased in October of 1985.

This entry was posted in Multi-Platform. Bookmark the permalink.

2 Responses to Siri and Eliza Have a Conversation