Found Photo: Me and My Apple QuickTake 200 Camera

I was recently digging about the storage shelves, looking for an old box of floppies when I came across a large box full of photos that I hadn’t opened since moving into this house ten years ago. I spent an enjoyable hour looking through this trove of photos that spanned a good five years, all at least ten years back down memory lane. One of the earliest photos I found in the mix is of myself standing on the Golden Gate Bridge in San Francisco, holding my first digital camera, the Apple QuickTake 200. This photo was taken in early 1998 — fifteen years ago, at the time of this post.

I used the QuickTake heavily on this first, real trip my wife and I took together, about a year after we met. She brought her film camera along, hence this photo. 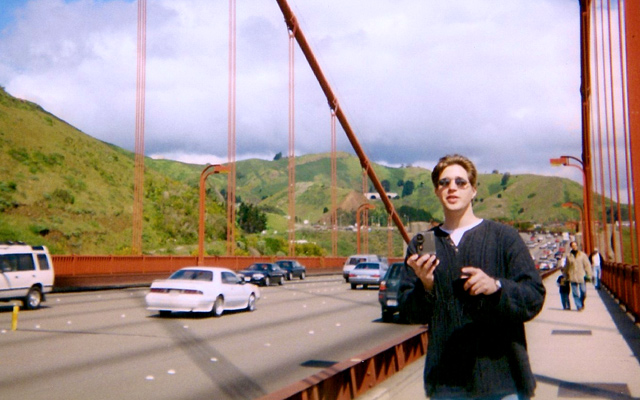 The gallery of photos I took on that San Francisco trip with that QuickTake 200 can be seen here.

Much more recently, I used the QuickTake to create the first photo panoramas of my computer room (“the Byte Cellar”). It, along with Apple QuickTime VR Studio 1.0, did a particularly good job with the panoramas, I thought.

Another piece of now-vintage hardware I had with me on that trip was my new Newton MessagePad 2000. I did lots of dialing onto the Internet with it from the hotel room, I recall. Good times.

One Response to Found Photo: Me and My Apple QuickTake 200 Camera